China-based smart device maker Xiaomi just released a “Xiaomi Mi Watch” that looks a whole lot like the Apple Watch. It has a very, very similar size and shape… and home screens (watch faces). See if you can tell which of these watches (at the head of this article) are from Xiaomi, and which are from Apple. There are some simple giveaways, but really – there’s no getting around the idea that there’s some MAJOR design inspiration going on here – to put it kindly.

We could spend all day playing “Guess Who Made What” here, but the imagery above should suffice. On the left you’ve got three views of the new Xiaomi Mi Watch, on the right you’ve got a couple of sets of Apple Watch Series 3.

This Xiaomi Mi Watch has a 1.78-inch (326 PPI) AMOLED always-on touchscreen display. You’ll also be able to control the device with the side-mounted crown and a single physical button. Users will interact with the watch with a new mobile OS from Xiaomi called MIUI for Watch. This software is based on WearOS from Google – which will be very interesting to see, given that “based on WearOS” has never really been a reality for a final market-ready product before now.

Despite this MIUI for Watch’s relative newness, Xiaomi said that “over 40” apps are available for the watch at launch. The Xiaomi Mi Watch also includes a natural-voice assistant called XiaoAI. Also if you look closely, at around 19 seconds into the video above, you’ll see that this watch has a flashlight-looking icon, which would indicate that it has a torchlight – but it’s likely just the display itself turning very bright. 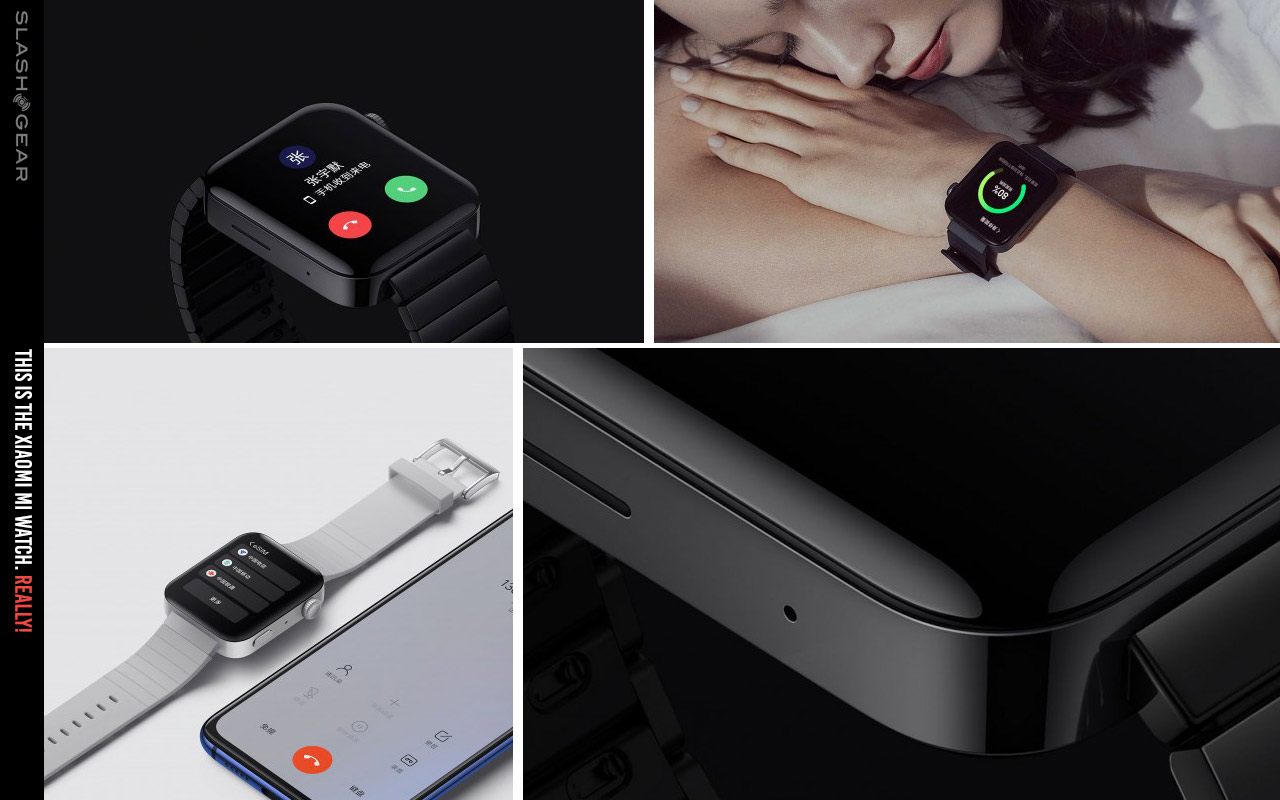 The Xiaomi Mi Watch has 4G LTE eSIM-based mobile data connectivity inside. Also in the Xiaomi Mi Watch are wi-fi connectivity, GPS, Bluetooth, and NFC. So it’s certainly stacked with features, and rolls with a decent mobile chipset too – the Qualcomm’s Snapdragon Wear 3100. This smartwatch is no slouch!

The external bits are aluminum alloy with a matte finish and a ceramic backside. The back has pogo-pin-compatible charging points (that connect with the in-box charger) and a heart rate sensor. There’s one size “44mm” with the aforementioned 1.78-inch display. All versions of the Xiaomi Mi Watch have two microphones for audio input and a single loudspeaker (on the left of the device) for music, calls, and assistant interaction.

If you’re OK with wearing a device that’s so unapologetically similar to a device made by a different company, the hardware and software could be a pretty decent value. After its initial launch in China, Xiaomi suggests they’ll be releasing the Xiaomi Mi Watch to a variety of other countries. In the next few months, India, Singapore, and Indonesia are first on the docket for further Xiaomi Mi Watch release. The Xiaomi Mi Watch can be ordered now, and pricing starts at CNY 1,299 (that’s around $185) and runs all the way up to CNY 1,999 (around $285).