Xiaomi beat Samsung in Europe for the first time

The past 18 months have thrown the smartphone market royalty into disarray. It was no surprise that Huawei was dethroned from its coveted spot but getting booted out of the world’s Top 5 was still painful. Samsung barely maintains a lead in the global market after a decrease in shipments, while Apple remains stable against all odds. Amidst this reshuffling, Xiaomi is emerging as the strongest contender, having surpassed even Samsung last quarter, at least in Europe.

It has always been a rat race between smartphone makers, especially in the congested Android market, but recent changes in the who’s who is shaking things up a bit. With Huawei’s exit in many listings, the opportunity for Chinese brands like Xiaomi and OPPO to take over has never been greater. As the latest data from Europe proves, Xiaomi definitely took advantage of that situation.

Strategy Analytics says that Xiaomi shipped 12.7 million smartphones in the region in the second quarter of 2021, up by 67.1% from the same period last year. It narrowly beat Samsung, which shipped 12 million units, but the Korean brand actually lost shares in comparison. Despite its 15.7% year-on-year growth, Apple was pushed to third place.

The biggest growers, however, were OPPO and Realme, despite having the lowest shipment volumes among the top 5. OPPO shipped only 2.8 million but grew by 180%, while Realme’s astounding 1800% growth was thanks to only 1.9 million smartphones shipped. As expected, Huawei is nowhere to be seen, but neither is Vivo. 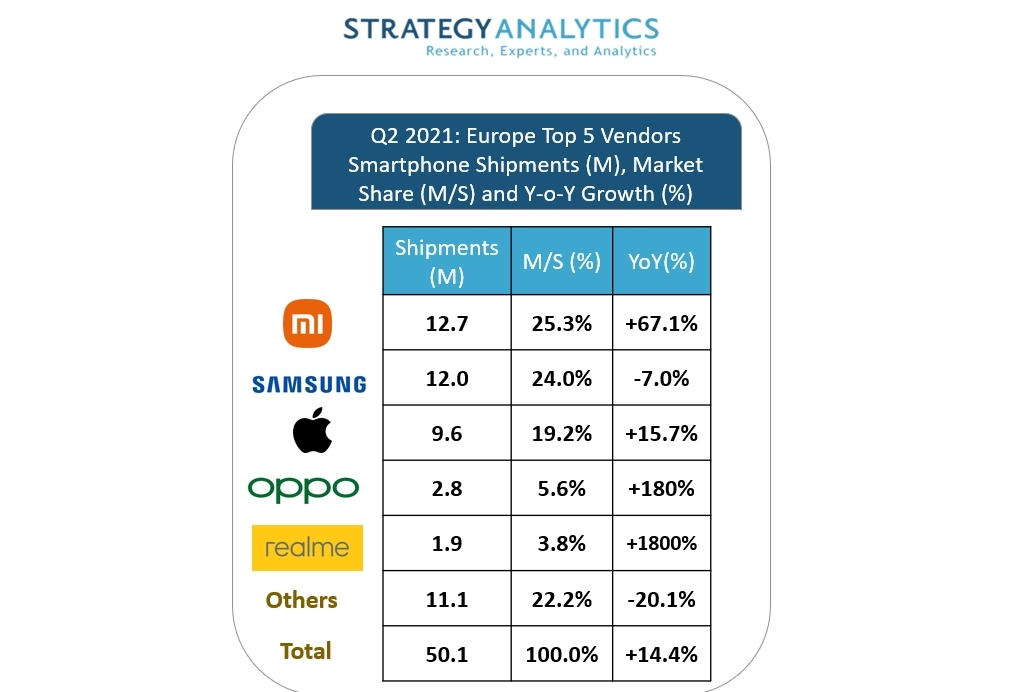 These might just be numbers, but it reflects a significant change in market trends, at least in Europe. Consumers are gravitating away from the likes of Samsung and Apple to get their smartphone fix, especially with new affordable 5G devices. More importantly, brands like Xiaomi and OPPO are starting to be seen in a more favorable light in recent years, providing enough threat to longtime market leaders in different regions of the world.