COVID-19 countermeasures last year has seen a surge in purchases of consumer electronics and home entertainment products, from laptops to gaming console to large TVs. Not everyone, however, might have the luxury of a large living room or large area to set up such a TV or, perhaps, they value flexibility and portability just as much as picture quality. Fortunately, consumers today don’t have to make a choice between the two and opt for something like the new XGIMI Horizon Pro 4K Projector that adds just a pinch of smartness to take away the drudgery of having to set up and position the projector perfectly every time you move it around.

The XGIMI Horizon Pro’s design is a bit of an oxymoron in that it is both eye-catching and yet nondescript. To clarify the latter, there is not much on any side of the projector’s faces, including the top one, that visually distracts from its rather striking premium design. The Horizon Pro’s metal chassis looks so handsome that you might not even believe how much it costs. 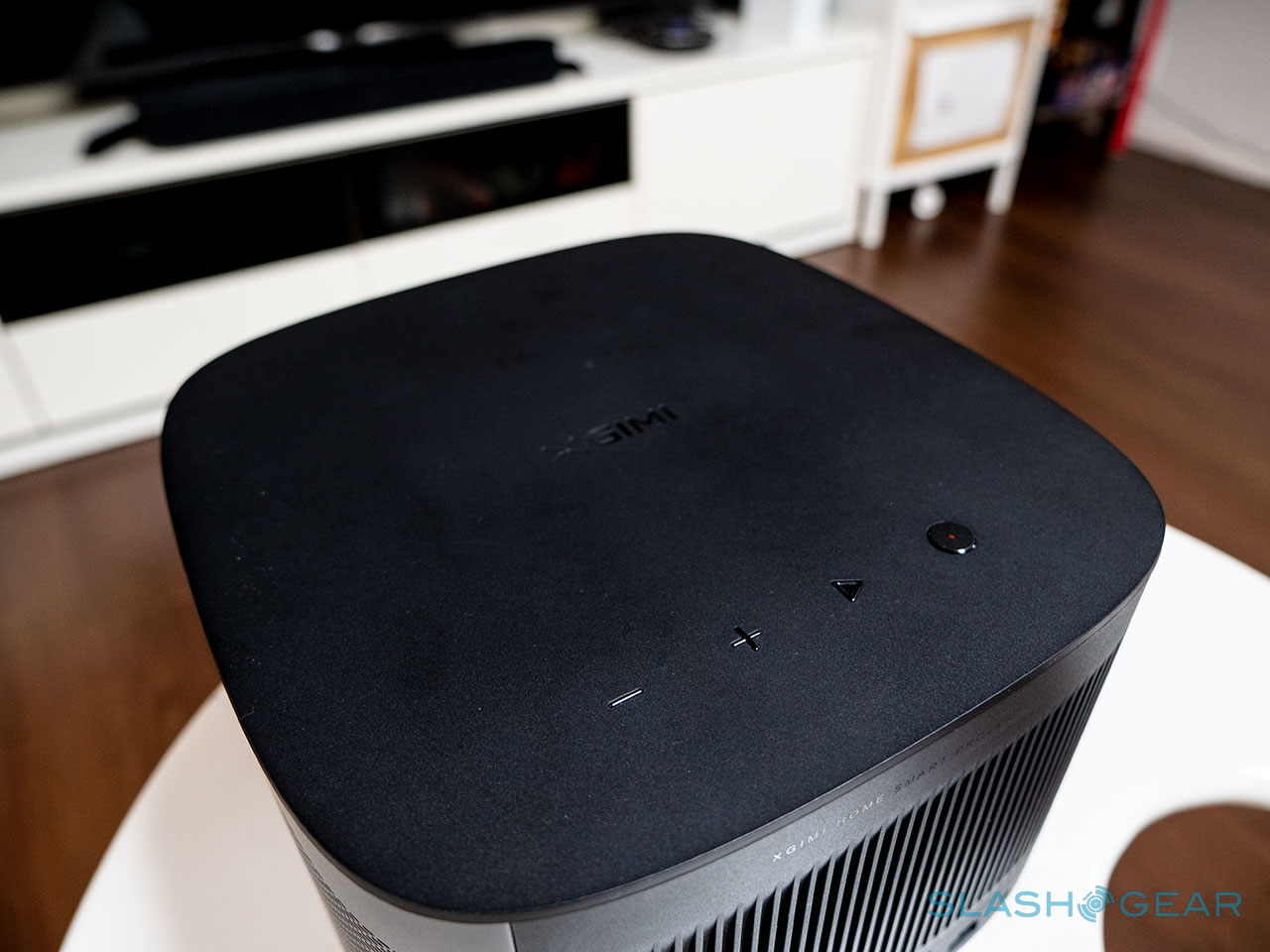 There is nothing on the front save for the large LED lamp and sensors for its smart tricks that we’ll get to later. Wrapping around the sides and front of the projector is the speaker grille that is unbroken save for that same lamp and Harman Kardon branding on the left side. The back does have the ventilation grille and the ports but the latter are arranged so neatly they’re easy to overlook and ignore. 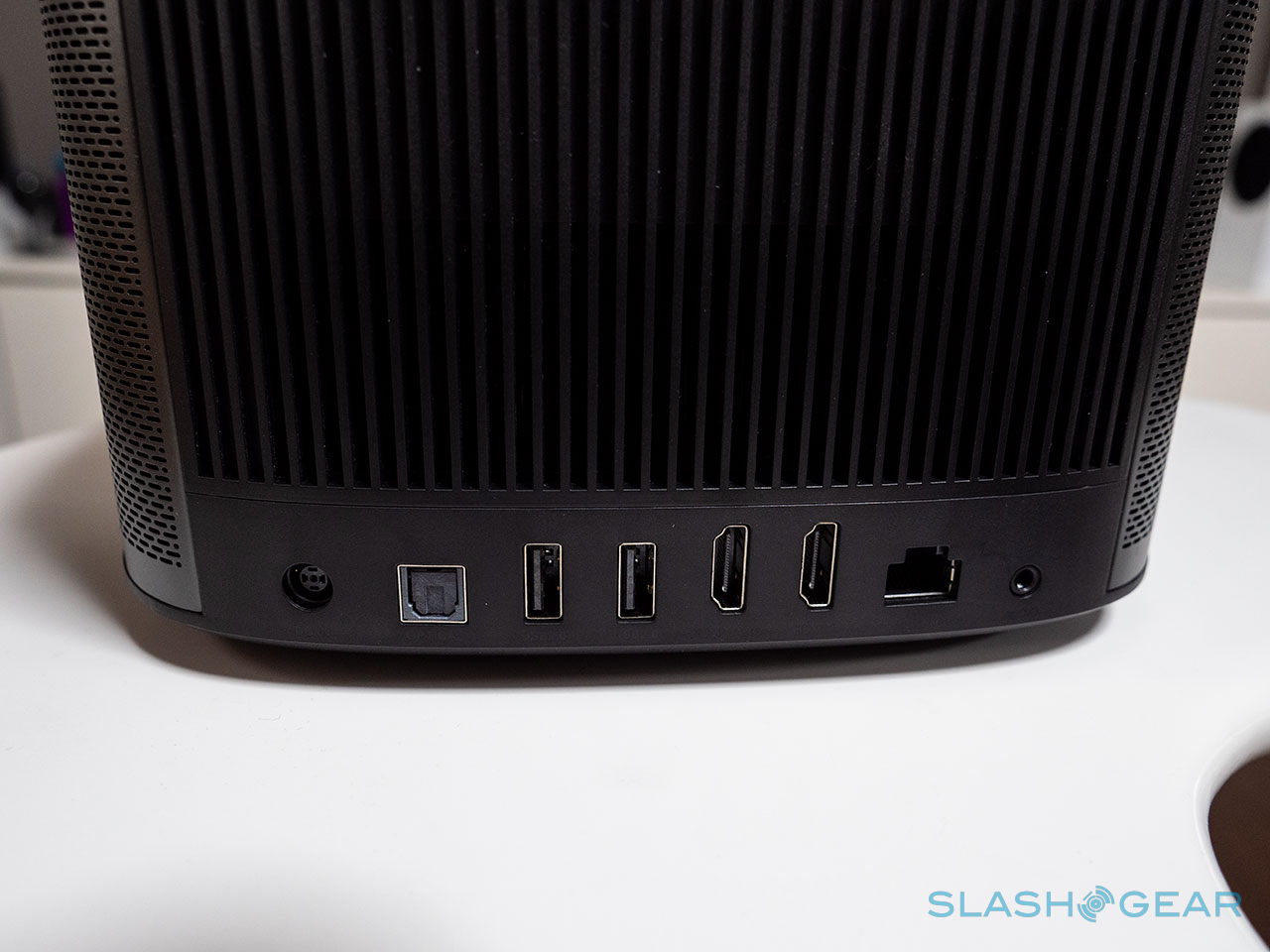 The XGIMI Horizon Pro supports all kinds of connectivity options, including both wired and wireless sources. The one thing to note is that even if you decide to go completely wireless, the projector doesn’t have its own battery inside. This means you will need to keep it plugged into a power source, something you’ll have to consider when deciding where to place the projector, whether permanently or temporarily.

The Horizon Pro also comes with a remote control that is just as visually interesting as the projector itself. The dual-tone design draws the user’s eyes towards the actual control area of the remote. Fortunately, there isn’t much there in the way of buttons but still manages to have its own unique visual identity and not just ape something like an Apple TV remote. 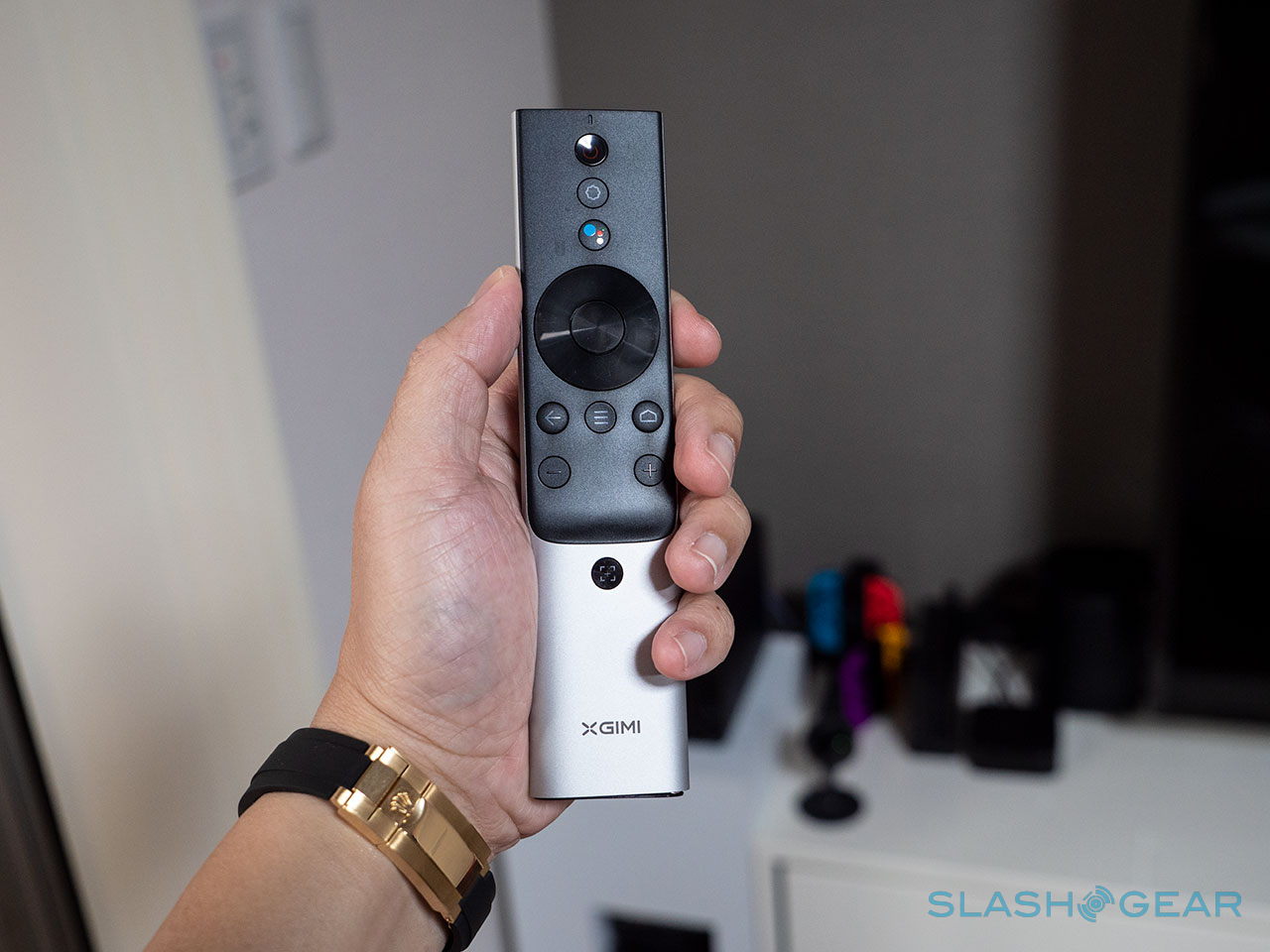 With a 2,200 ANSI lumens rating, the XGIMI Horizon Pro is plenty bright. Of course, your mileage may vary depending on when and where you watch but only bright sunlight from a window will ruin the experience completely. Fortunately, it’s precisely because of the projector’s mobility that such considerations don’t have to be permanent.

Under favorable circumstances, the Horizon Pro 4 throws bright images with vivid colors. It really excels at 4K content, which is to be expected from a 4K projector and combines some of the best video technologies possible on a projector, including HDR10 x HLG (Hybrid Log Gamma) and MEMC (Motion Estimation, Motion Compensation). Unfortunately, don’t expect more advanced standards like HDR10+ and Dolby Vision which are still out of reach of DLP projectors anyway. 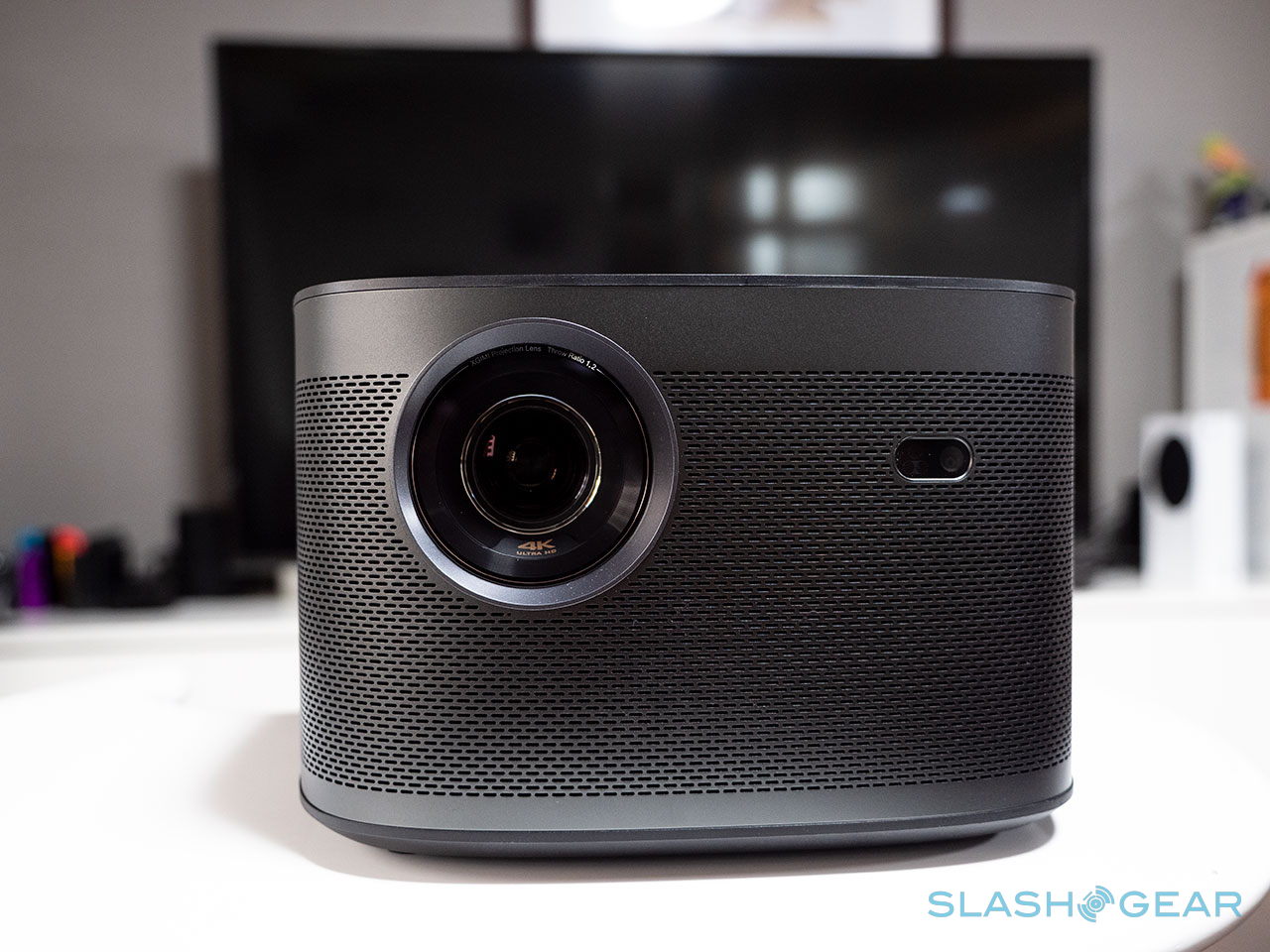 The one chink in the Horizon Pro’s otherwise formidable armor is any content lower than 4K, especially HD sources and even SDR content. The projector’s upscaling algorithms could use a lot of work as it produces inconsistent and poor quality images from these low-res sources, especially film grain that pops up and disappears randomly. For those who mainly get their videos from such sources, you don’t have to go far because XGIMI does also have a non-Pro Horizon projector specifically for 1080p content.

Where the XGIMI Horizon Pro really shines and where it easily outclasses its more expensive rivals is in the area of automatic calibration and setup. At its most basic, the projector uses AI to automatically adjust the brightness but that is just the very tip of the iceberg.

More interesting is its ability to automatically adjust alignment, keystone, angle, and focus, depending on what you’re projecting on. Its AI can automatically detect the size of a projector screen, if present, and resize the projected image to fit it. More impressive is how it can detect and avoid obstacles so that you don’t have to set the projector up perfectly to avoid doors or cabinets. 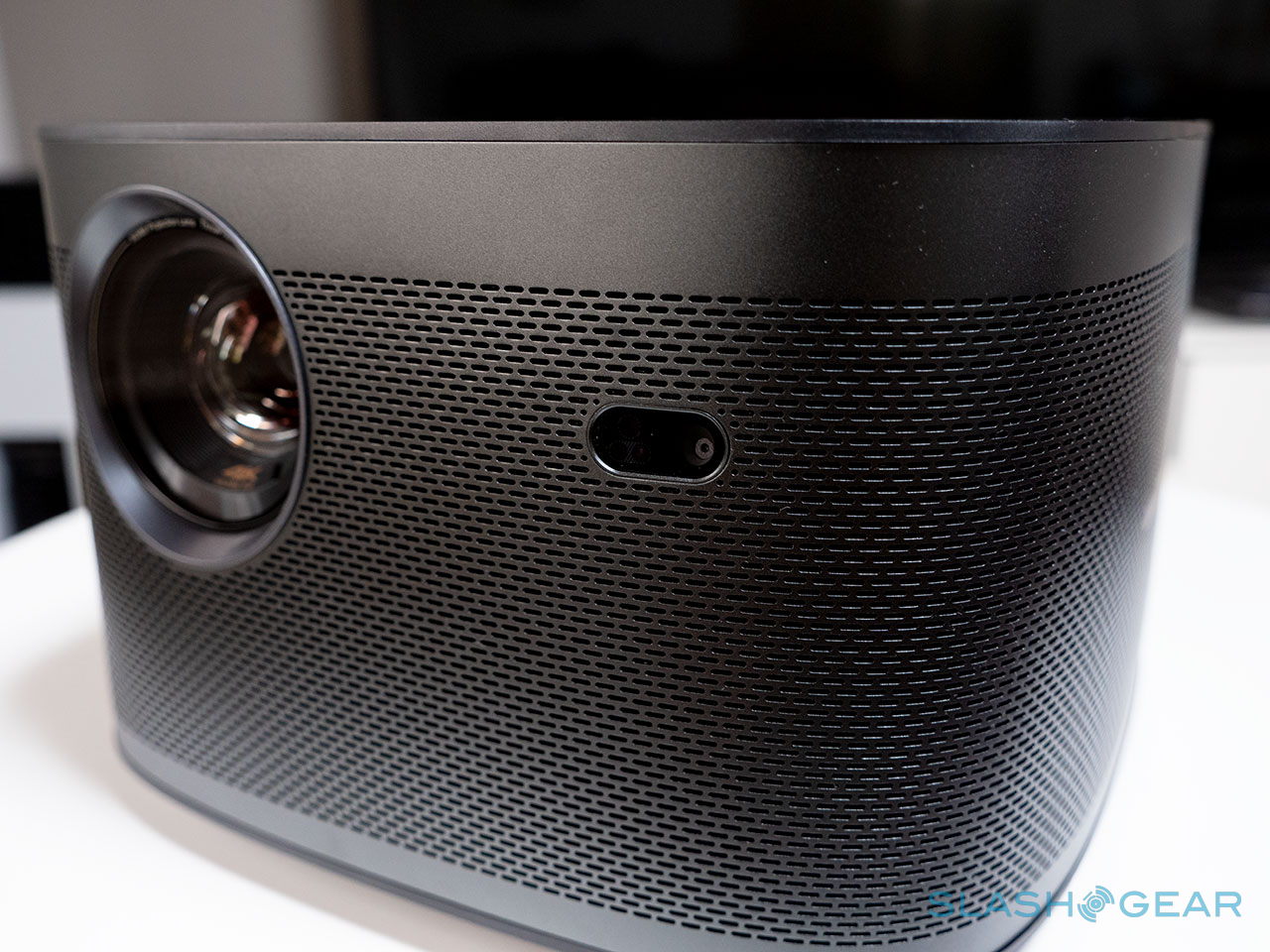 This is easily one of the Horizon Pro’s most impressive features and it works really fast. Moving the projector just and the automatic calibration kicks in within just seconds. Of course, if you move it too much, the recalibration will also take longer but it’s definitely a must-have feature for today’s projectors.

The XGIMI Horizon Pro 4K Projector isn’t just a projector, despite its name. It’s a complete package that could pretty much replace your TV because of its built-in speakers. The two 8W 45mm speakers even boast of Harman Kardon tuning.

In practice, the rather small box can surprisingly produce loud and full sound, though nothing that can compete with larger and more dedicated speakers, of course. It’s enough to fill a small or moderately sized room but larger requirements will need larger blasters. And while the Horizon Pro does sport DTS Studio Sound and Dolby Audio, it’s really no surprise that it doesn’t tout more advanced technologies like Dolby Atmos. 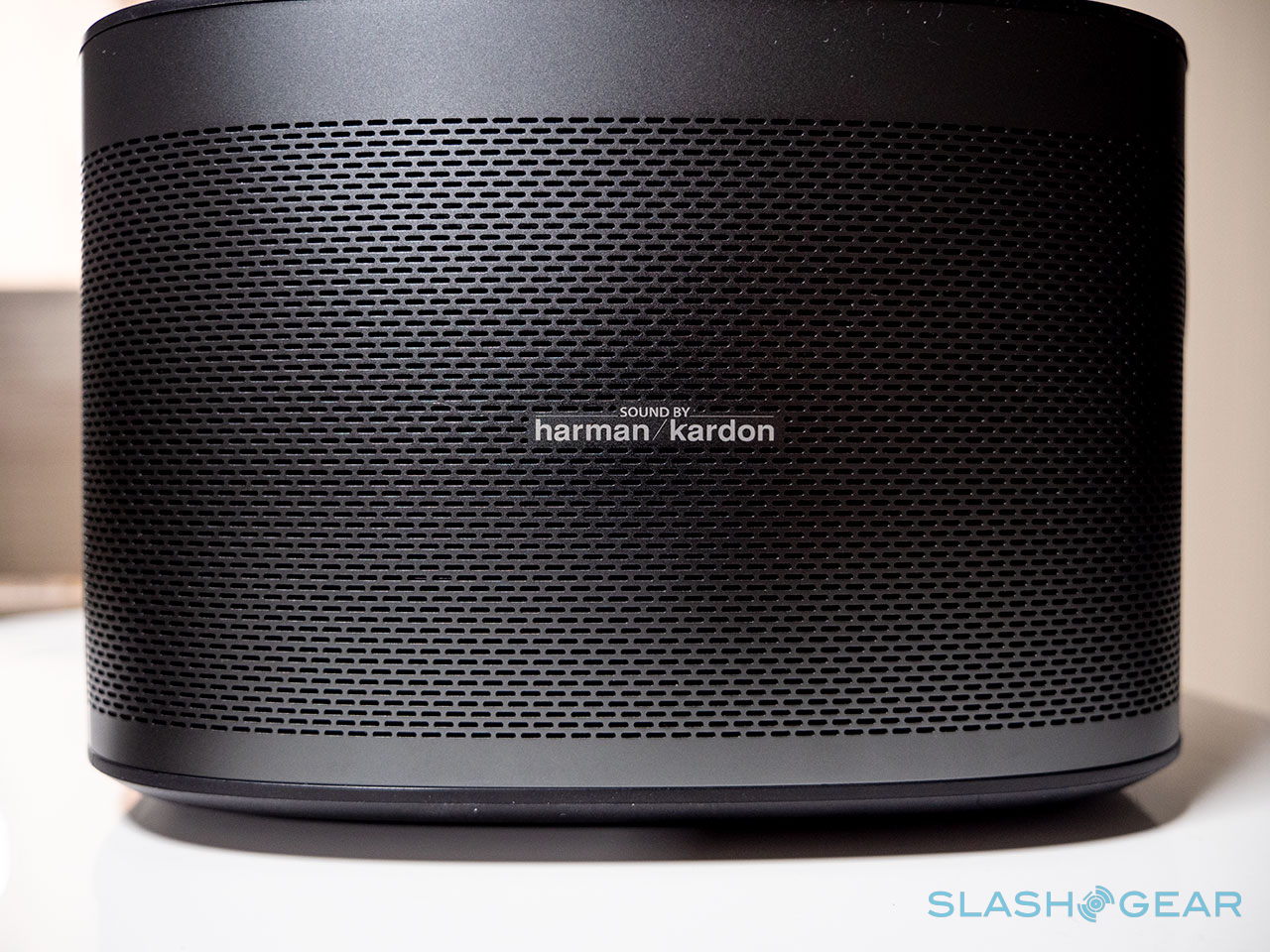 The Horizon Pro 4K projector isn’t just a projector, though. It is actually a certified Android TV box, which means it has complete access to Google Play Store apps and games. Or at least the ones that are compatible with Android TV. Unfortunately, that is also where things get a bit murky.

As an Android TV device, the Horizon Pro has access to your staples like YouTube, Hulu, and Amazon Prime, all of which we’ve tested to work without any issue. Netflix, despite being pre-installed, wouldn’t work and claims that it’s an unsupported platform. No luck in getting Disney+ to work either, which removes access to two of the biggest names in the streaming market. Hopefully, it’s just a software issue that can be easily fixed with an update.

Aside from that, however, the Horizon Pro offers all the conveniences of the Android TV platform, including the easy casting of content from Android phones, and then some. An important added feature is the ability to zoom in and out of the screen’s UI to make navigation easier and more accessible, depending on the situation. 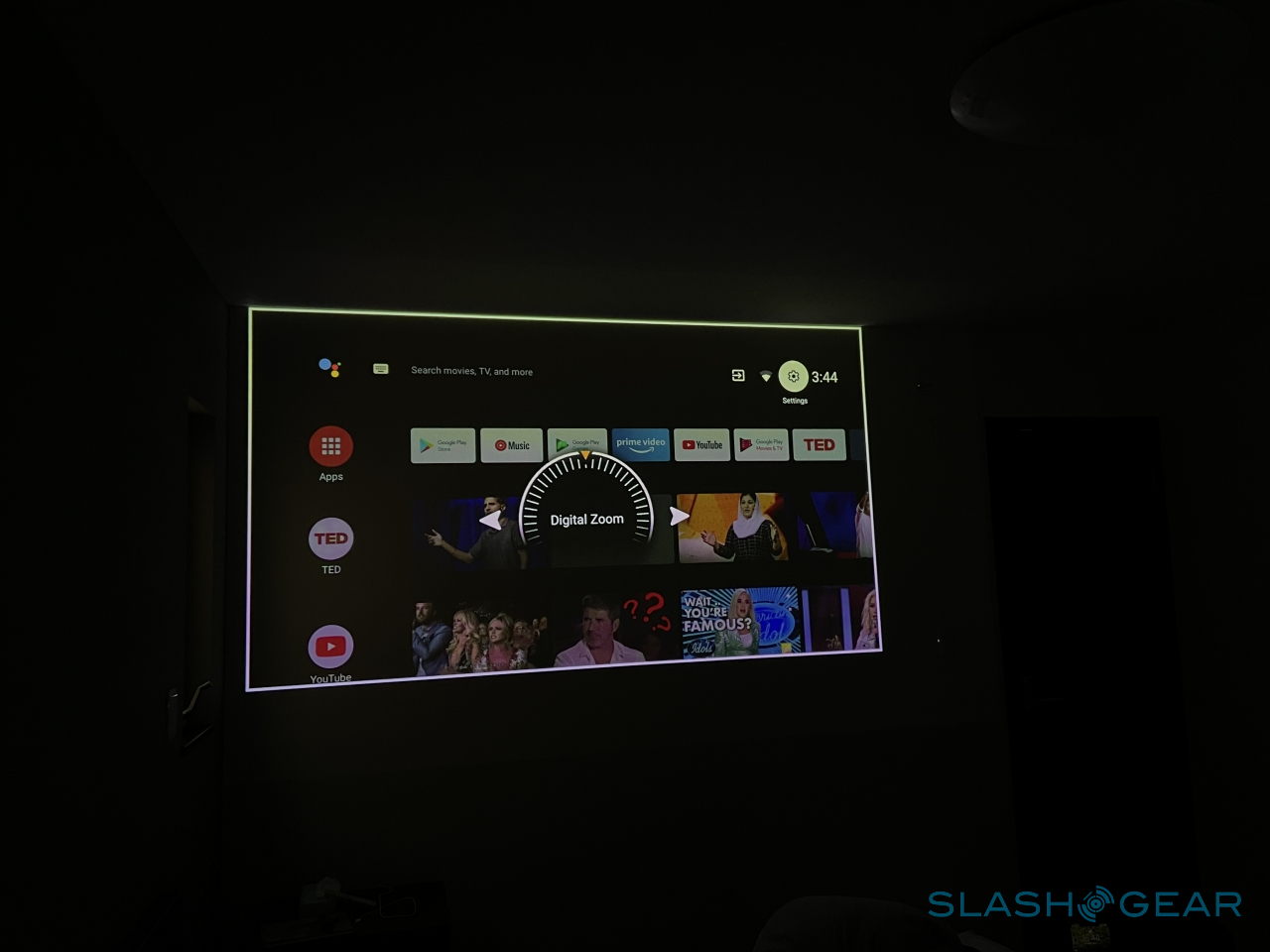 The XGIMI Horizon Pro 4K Projector is currently in a pre-order period with a retail price of $1,699. While that looks pricey, it’s still a far cry from more premium models from competing brands. That doesn’t mean that the Horizon Pro is less powerful. On the contrary, at that price point, it almost has no business being this beautiful and feature-rich.

Sure, it has its warts like upscaling and Netflix support but, hopefully, those can be addressed by some software updates. All in all, the XGIMI Horizon Pro 4K Project feels almost like a steal with its premium features at half the price of equivalent projectors.