This week the folks behind Xbox SmartGlass have made a big update for those of you working with the iPhone 5. This update includes some ever-so-slight bumps to the top and bottom of the display so that you’re not working with an iPhone 4-sized user interface and you’ll find all of your favorite features from the previous version still very much in-tact. This update to Xbox SmartGlass also brings a collection of bug fixes to both the iPhone 5 and iPhone 4/4S.

Xbox SmartGlass is an app that was released earlier this year for several different systems including iOS for Apple products, Windows Phone 8, and Android. In this app you’re able to log in to your Microsoft profile and find all connections to your favorite games, video, and scores galore. This is the same set of information you’re able to get when you log into Xbox Live and your Xbox Games on Windows Phone and Windows Phone 8 and allows you to work with data across your Microsoft profile in general. 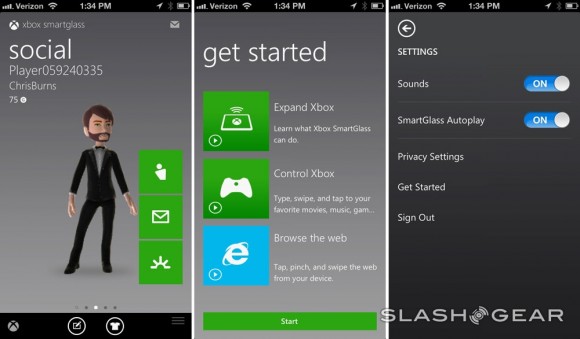 Here you’ve got a connection direct to your Xbox as well with the ability to control which streaming video content is up next on your system. Interestingly enough, this system also uses many of the same sound effects and the same aesthetics as you’ll find in the Xbox and across the Windows 8 ecosystem. In this way, Microsoft makes it clear that they’re running the show, and that it’s their experience you’re working with, no matter the platform.

You can download this app for free from the iTunes Appstore right this minute by searching for “Xbox Smartglass” and hitting that free/install button. From there you will indeed need a Microsoft account, but you wont necessarily need your Xbox to log in. This app is able to both control content on your Xbox when you’re in the room with it and look up and display information about your account no matter how close you are to your hardware.