Security cameras are known for being pricey, and that’s why Wyze is so unusual. Forget spending $100+ for a name-brand home security camera or $50+ for a generic brand. Wyze is a small cube-shaped camera that costs $19.99, making it one of — if not the most — affordable home security cameras on the market. What kind of compromises were made to hit such a low price point? Surprisingly few.

The Wyze camera is sold in a small, dense rectangular box. Open the box and you’ll find two smaller cubes: one cube is the camera and the other contains its long USB charging cable. Joining both is a round metal pancake and a 3M adhesive backing. It’s all very simple. The camera’s hinged and magnetic base is already attached to the bottom of the camera, but you don’t have to use it.

Pushing the base up against the bottom of the camera causes it to fully fold into the camera, leaving you with a simple palm-sized cube. The base has magnets embedded in it and can be attached directly to a metal surface like a stove hood, refrigerator, metal door, or certain windowsills. The included metal pancake and adhesive backing makes it possible to attach the camera to any surface, however. 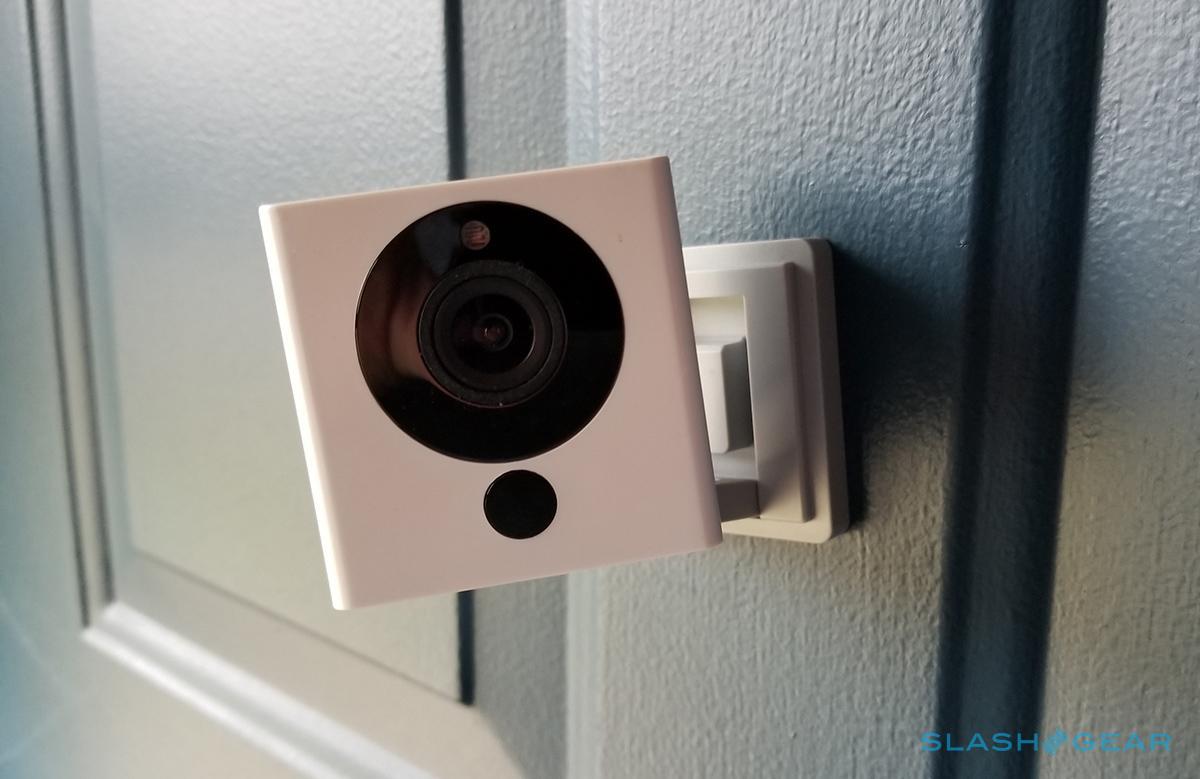 The metal pancake (or disc, if you prefer that term) can be affixed to any surface, though make it count: you can’t easily remove it without ruining the adhesive pad and, potentially, the surface itself (paint, etc). If you know you want the camera mounted in the corner of a child’s room, for example, the metal pad is a good option. If you’re looking to put the camera somewhere for just a day or a week, though, consider using adhesive Command strips that have pull-tabs. These can be removed much more easily than the included 3M adhesive.

Depending on where you place Wyze, it is very inconspicuous, and that’s a good thing. Because the camera in cube shaped, it can be perfectly placed in the corner of a room near the ceiling, wedged neatly under a cabinet, or even placed on a shelf among cube-shaped decorations. The dark circle around the lens means it isn’t totally undetectable, however.

Setup is similar to other WiFi home cameras and took less than three minutes each of the five times I did it. The Wyze camera has a “Setup” button on the bottom that can be pressed without using a pin. After pressing it, the user enters their WiFi password in the app, then holds the security camera up so that it faces the QR code shown in the app. The camera scans the code, connects to WiFi, and appears within the app a moment later. It is very simple. 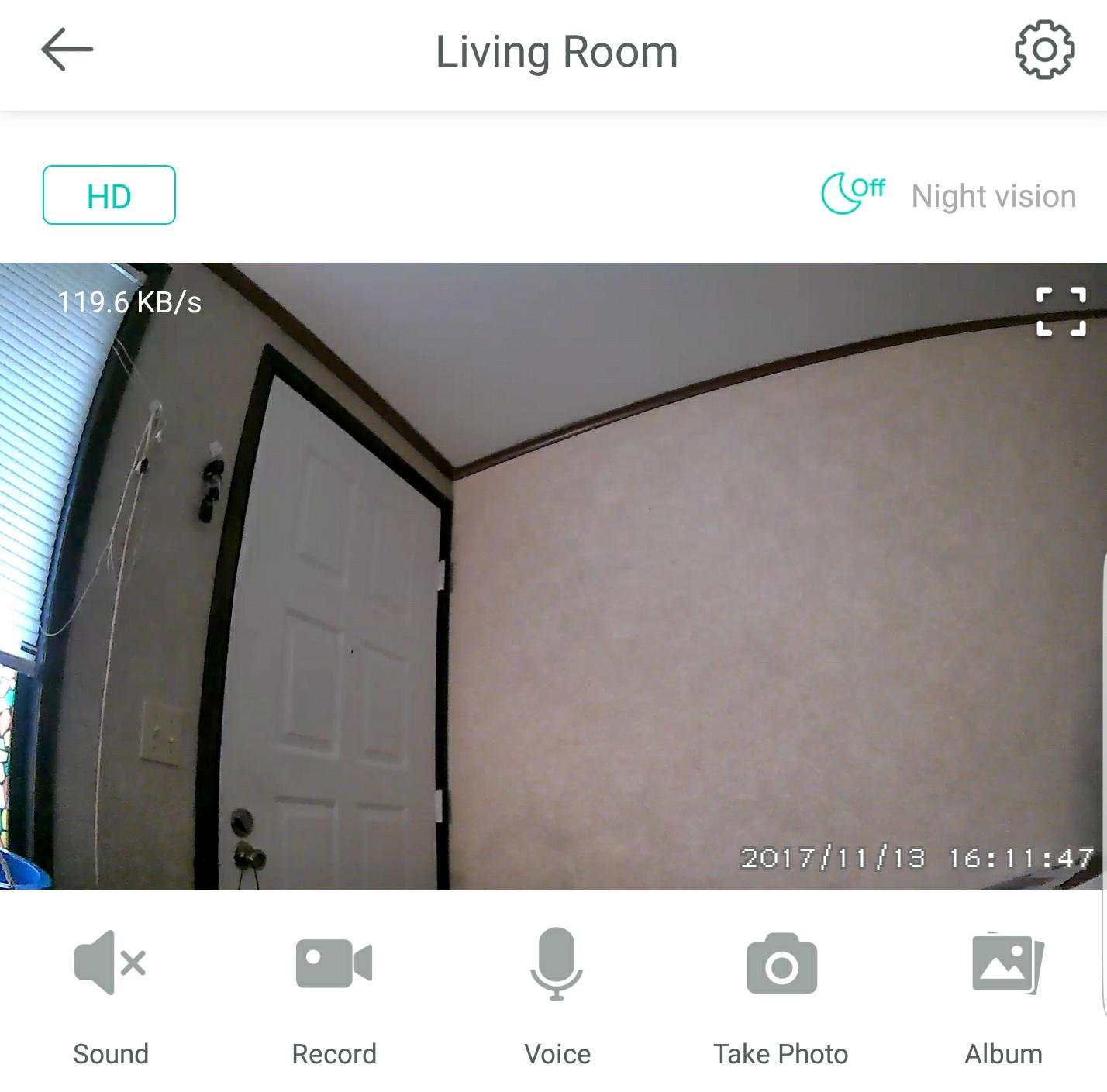 Wyze works with a companion iOS and Android app that, after registering the cameras, presents all of the video feeds in a single spot alongside features, controls and saved content. The controls are typical to home security cameras: voice (microphone), sound, taking a photo, recording a video, and opening albums of content captured by the app.

In addition to the basic controls, users have access to the Night Vision function; you can set it to Auto or manually toggle the IR lights on and off. There’s also a small video resolution button for toggling between high definition and standard definition. From there, users can set up (or leave disabled) some more sophisticated features, such as CO and smoke alarm detection, sound and motion detection, enabling microSD card recording, turning on/off the status light, and rotating the video 180-degrees. 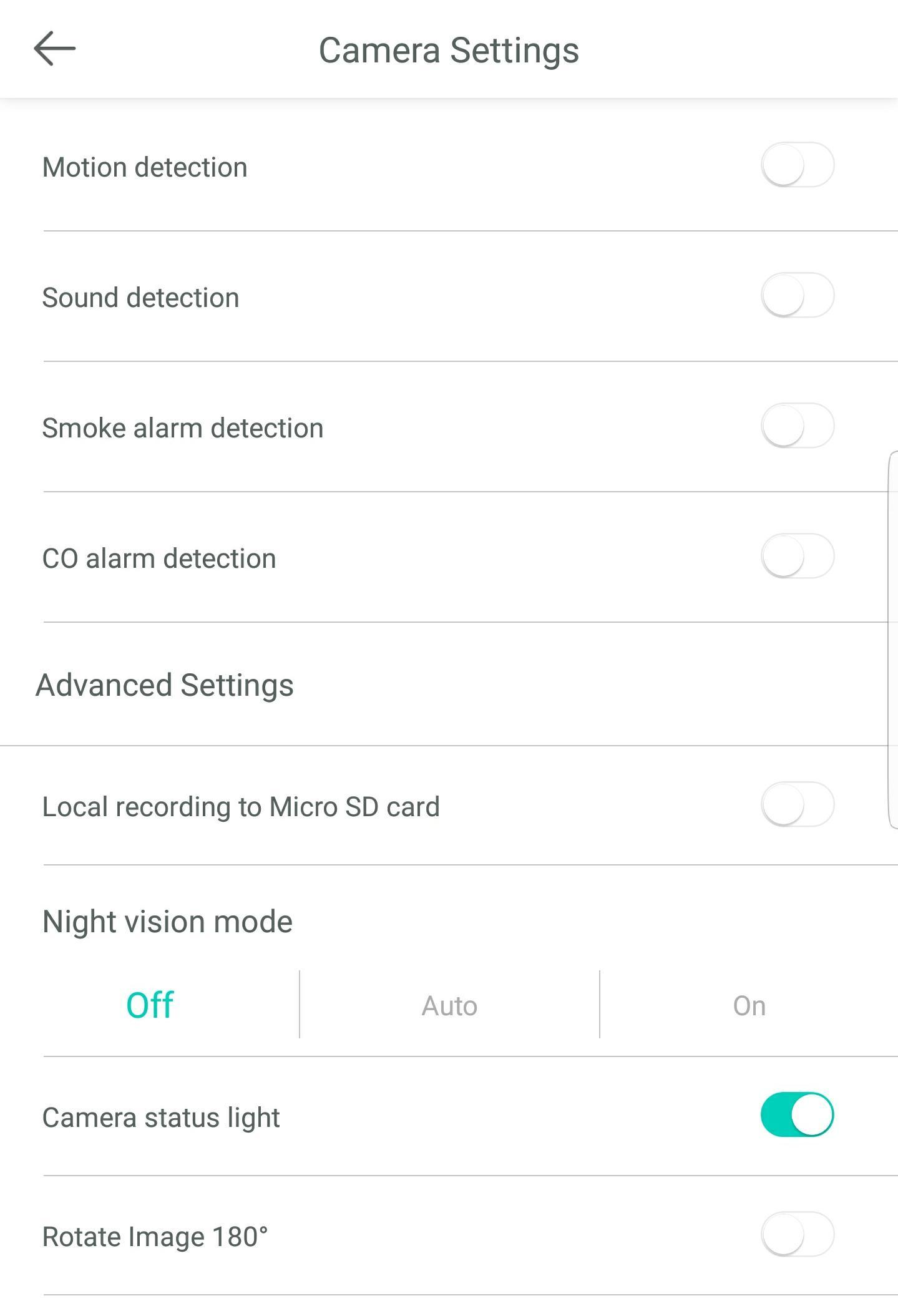 Some of the more advanced features found on more expensive cameras, such as zone monitoring, are absent, but that is to be expected at such a low price point. What wasn’t expected, but definitely welcomed, is the free 14-day cloud storage for recorded video clips. When Wyze detects something, it records a clip between 10 and 15 seconds long, then uploads it with end-to-end encryption to the cloud. The clip is stored for 14 days, and you don’t need to pay for storage space or any sort of cloud subscription.

The most obvious thing to love about the Wyze camera is its low cost, but a cheap price alone isn’t enough to justify buying the model. Fortunately, the camera works very well most of the time. 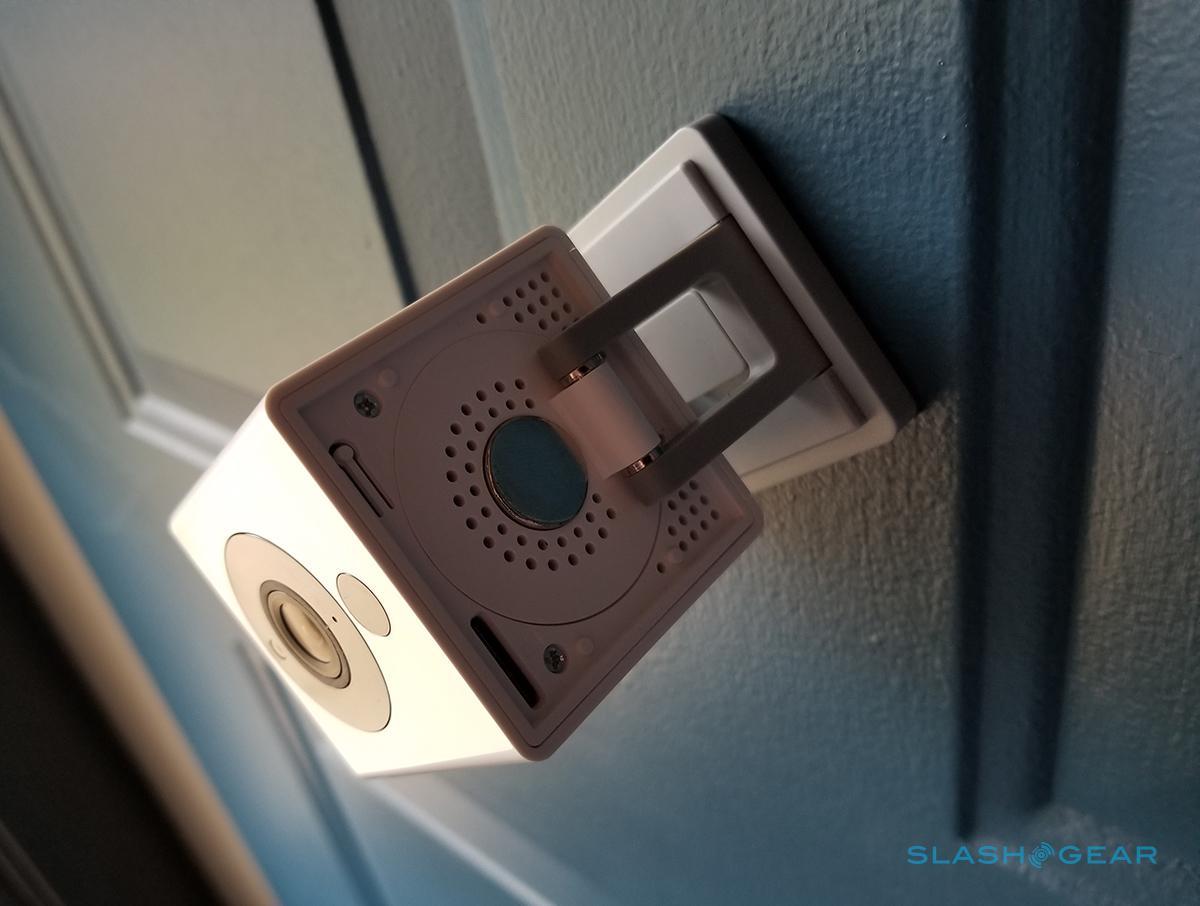 I used a pair of Wyze cameras over the course of a week in various situations and found they performed well in all of them. The flexible hinge and magnetic base means the camera can be positioned almost anywhere, though there are some limitations to it (more on that in the next section). The night mode is surprising in its effectiveness. When placed under a porch eave, for example, the camera was able to illuminate the porch and full patio, plus parts of the lawn around it.

The hinge rotates freely — that is, without any resistance — on its base, which means there are some angles the camera can’t be positioned at. This isn’t due to the camera’s ability to sit at those angles, but instead because the freely rotating base results in the camera swiveling around under its own weight or the power cable’s position, failing to stay at the precise angle you may want it.

That’s only an issue if you mount the camera hinge upside down or flush against a wall with the camera itself extended outward and angled downward to either side. That’s not a position you’re likely to put the camera in regardless, so it’s not a big deal. If you do have a need for such an unusual angle, though, expect to get creative with rubber bands to keep the camera at a steady angle. 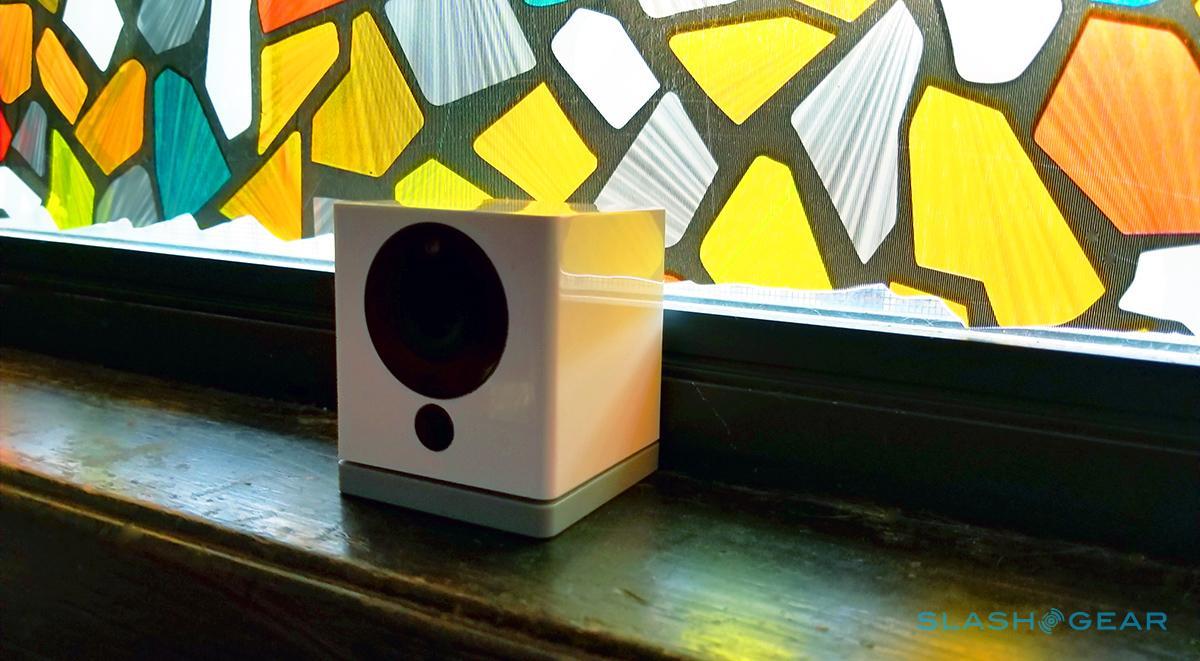 Other points to note: the camera and its hinge are made from plastic, so don’t drop it from any decent heights onto a hard surface and expect it to survive unscathed. Because the camera mounts with magnets, a mischievous child or cat with access to it (or its cable) can easily pluck it from its mount, causing it to tumble to the ground.

Finally, Wyze’s built-in speaker is tinny and quiet, and for this reason the two-way audio feature isn’t really something you should depend on. If the camera is in a quiet room and someone is standing close to the camera, you’ll be able to hear someone speaking through it. If the room is noisy, though, if it is windy outside or the camera is more than a few feet from the person, all bets are off as far as actually hearing it are concerned.

Budget WiFi cameras are known for being difficult to setup and buggy, and while Wyze doesn’t present any issues with setting up, it did present a moderate amount of bugs during usage. None of those bugs are things I haven’t encountered with other budget cameras, including ones from Funlux and Yi, and they didn’t ultimately interfere with usage. However, some troubleshooting was required at times and that may be a problem for tech-illiterate users.

For one example, after unplugging a camera, there was a chance that it would never reconnect, requiring me to press the setup button on the bottom and reconnect the camera manually. While that’s not a long process, it is annoying. If you plan to move the camera around frequently, that may be an issue. As well, if the power goes out briefly while you’re away from home, such as traveling, it could be problematic if the camera fails to reconnect to WiFi on its own.

The video sometimes had a small lag and there were semi-frequent times when the video feed would pause even though the app showed a decent WiFi connection speed. That was a problem that didn’t have any apparent cause or solution — I’d just have to wait for it to sort itself out, a process that could take between several seconds and a minute.

More often than not, though, the cameras and app worked as expected and without issue.

After spending a week with a couple Wyze cameras and comparing them to the $40 – $80 WiFi security cameras I already have, I’m impressed with both their performance and their features. The Wyze can, for example, do everything my $40 Funlux home security camera can do, only with the inclusion of microSD card recording, which the Funlux model lacks. To be fair, though, Yi’s standard home camera also costs $40 but includes microSD recording and zone-based motion detection.

Wyze is a case of needing to know what you want, what you can live without, and whether paying very little is important. While spending a little bit more may get you a couple extra features, those features may be pointless for the context in which you plan to use the camera, making Wyze the obvious choice.

Despite its minor hiccups, Wyze offers a great feature set, good Full HD quality, great night vision, and a price that is unbeatable in the home security camera market. Available from Wyze.com now for $19.99 USD.