While we’d love to say this is SlashGear’s new intern, in actual fact it’s a shot from the first review we’ve seen of WowWee’s RoboRover.  Announced at the tail-end of September, the RoboRover is WowWee’s first robot to use tank-track style locomotion and, according to RoboCommunity member GWJax, they – together with the IR-based obstacle avoidance system – do a pretty decent job. 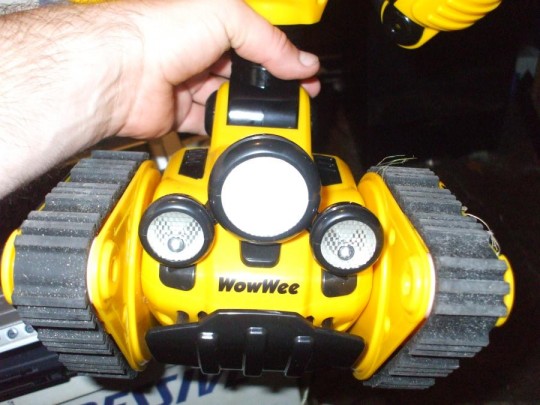 Unlike a proper tank, though, they’re not all that suited for clambering over bumps and the like; RoboRover will manage roughly 1-inch obstacles, but anything higher and he’ll likely topple over.  Thankfully he’s also able to righten himself from most such incidents, as you can see in the video below.

There are still a few issues (and we’re not keen on the amount of crud the tracks seem to pick up, especially if you have pets or thick carpet) but generally this seems a decent toy ‘bot for the price ($69.99).  More videos and photos – plus details of the game modes and other autonomous play – at the full review.