The world’s oldest figurative tattoos have been found on a pair of Egyptian mummies, according to a newly released study detailing the findings. The tattoos were found on a pair of mummies dating back about 5,000 years, one a female with “S” shaped curves on the shoulder, the other a male with a wild bull and Barbary sheep tattoo.

Though these aren’t the oldest known tattoos — that honor goes to an Alpine mummy named Ötzi — they are the oldest known examples of figurative tattoos. As is common in some traditional tattooing practices, these tattoos were likely created using soot; though not as sharp or precise as a modern tattoo, both preserved examples are clear enough to discern.

The mummies are from Upper Egypt in Gebelein; both were found in shallow, ordinary graves with no unique preparations — that is, they weren’t deliberately mummified. Rather, the conditions of the desert in which they were buried resulted in natural mummification. 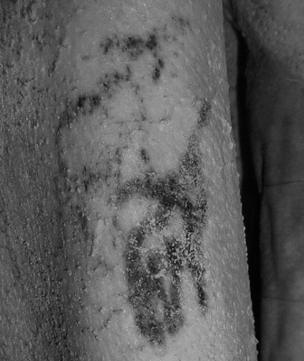 The discovery is exciting for multiple reasons, one being the age of these figurative tattoos, but the other being the presence of such a tattoo on a male. Before this, it was thought that only women had tattoos during that time period, but this pairing dashes that belief. As for the tattoos themselves, the researchers can’t entirely say the meaning behind the markings.

The four “S” shapes on the woman’s shoulder are speculated to represent a ritual dance’s batons; both sets may pertain to things like the individual’s alleged magical knowledge, their bravery, or they may even signify the person’s status in society.