All you lovers of the Angry Birds brand can rest easy knowing there’s an Angry Birds-centric store headed your way soon, as the first shop has officially opened its doors for business in Helsinki, Finland. Of course Finland is the birthplace of Angry Birds and still where Rovio, the developer of said game resides, so of course the first store should open in such a place. Of course we’ve got to wait and see how well it does before more shops open nationwide and worldwide, but for now, we’ve got our own versions in just sections of stores such as the one you’ll see a bit later in this post, complete with hookahs.

Of course the real Angry Birds store would never have smoking apparatuses, but that’s just what our pal SIMMS22 from the Android Community forums found this past week whilst bumming around New York City. And we’re SURE the Mighty Eagle would not approve of such debauchery. 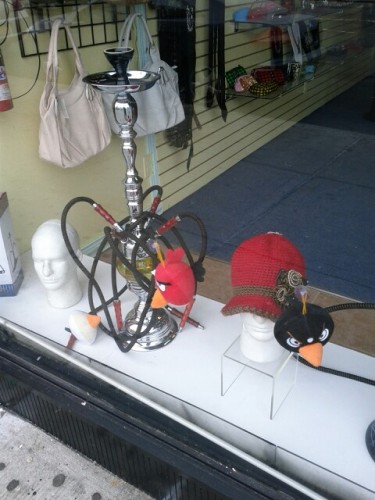 These displays are becoming more and more common as Rovio ramps up production of their iconic birds made into toys, and now that there’s a shop, they’re only shooting straight up. Do you own an Angry Birds toy, apparel, or accessory of any kind? Why not?!

The first Angry Birds store on earth features a gigantic slingshot that unfortunately isn’t capable of launching birds, it does make for a nice seat to sit and get your picture taken in, kiddies. Inside the store you’ll also be able to pick up Angry Birds books, gigantic stuffed animal toys, and apparently some awesome skateboard action as the two fellows in the image below will show. Angry Birds ho! 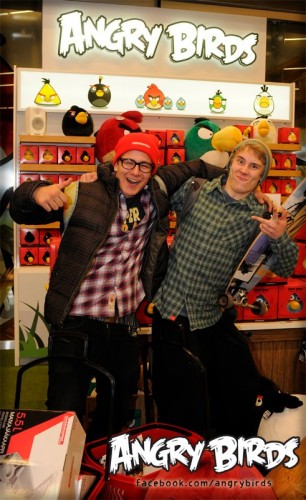