How on earth are you supposed to review something like World of Warcraft Classic? Not only are MMOs hard to review in the first place given their emphasis on community, but WoW Classic is already a known quantity. We already played this game 15 years ago – or, more specifically, 13 years ago as WoW Classic is based on patch 1.2 for vanilla WoW, which didn’t ship until 2006. Regardless of the specific moment in time WoW Classic captures, many of us have played this before, and we all likely have an opinion on how good this game is.

I’m one of those people, but I have to admit that outside of nostalgia, I don’t have many strong opinions on World of Warcraft. I played my fair share of the base game and I’ve returned at various points throughout the years to check out the state of the game. The bulk of my playtime, however, remains with vanilla WoW, so World of Warcraft Classic is a game that’s aimed precisely at me and the people of similar backgrounds.

Blizzard’s goal of suckering people like me into re-subscribing has apparently succeeded with flying colors. Not only have I stated plain my rekindled addiction to World of Warcraft, but the long queue times that remain to this day on some servers are testament to this idea that World of Warcraft as it existed in the mid-2000s – free of modern-day streamlining and all of the content included in several massive expansions – was something special.

Even here in 2019, the core gameplay loop of classic WoW is a lot of fun, and I don’t think that’s only nostalgia talking. It’s slow, that’s for sure, but that’s okay because WoW Classic is something to be savored. There have been and will be plenty of people trying to race to WoW Classic’s level cap of 60, but I would argue that taking your time and getting immersed in the world around you can only improve the experience. That’s especially true for folks who haven’t spent any time playing on unofficial, private vanilla servers. In short: If this is your first foray into vanilla WoW since 2004, take your time in playing this game. 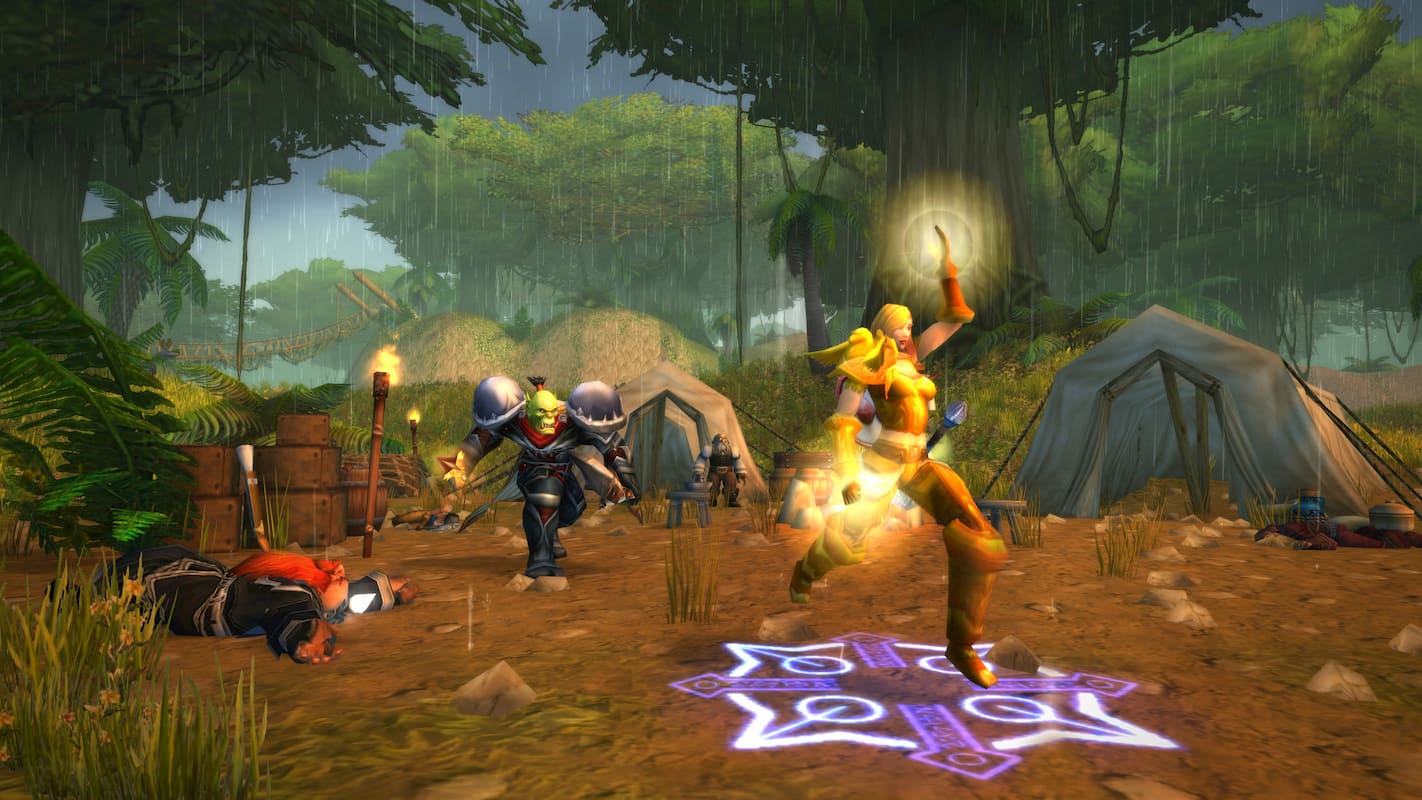 That isn’t to say that the leveling process in WoW Classic is a perfect one. A number of the quests you’ll encounter as you’ll play are fetch quests – quests that have you either killing a certain number of enemies or retrieving a certain number of items from those defeated enemies. 15 years after World of Warcraft initially launched, I’d say many of us have had our fill of fetch quests.

The presence of fetch quests isn’t necessarily a bad thing, but it does lend to this feeling that WoW Classic can be a very grindy game. This sort of goes hand-in-hand with the notion that WoW Classic is also a slow game, but regardless, you’ll do a lot of running around on behalf of people who are holed up in settlements and cities, often to do quests that have a very similar structure. You’ll also do a few escort quests as you play, and I don’t care what game they’re in, I will never like those. 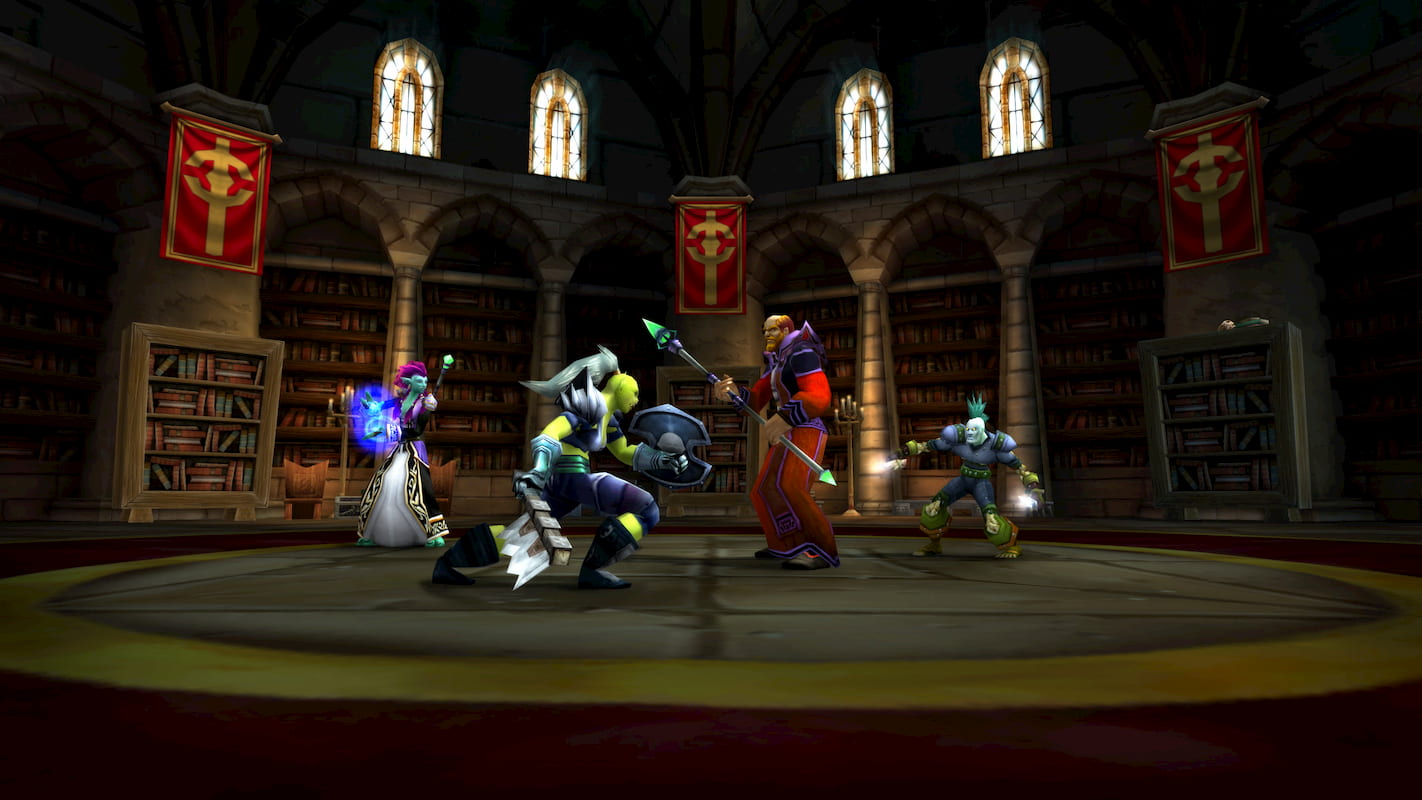 For someone like me, who played vanilla WoW back in the day and has fond memories of this gameplay loop, none of this is really an issue. For people who are checking out WoW Classic for the first time, however, I can see how it might be boring at times. If your only experience with WoW has been through more recent retail builds, or you’ve never played WoW at all, I think WoW Classic is still worth checking out, but don’t be surprised if you’re left wondering what all the fuss is about.

This game is also surprisingly challenging – more challenging than I remember it being. As I’ve been playing, I’ve often needed to group up with other players to complete quests simply because I can’t complete them on my own. That isn’t a complaint, of course; this is an MMO, the entire point of it is playing with other people. I appreciate how WoW Classic makes the community around you necessary for more than just dungeons and raids.

Community, after all, is a critical component of WoW Classic, and while a lot of online games are derided for their toxic communities, I don’t see much of that in WoW Classic at all. Don’t get me wrong, Barrens chat is still a cesspool packed with trolls and edgelords, but 15 years later, it’s kind of nice to see the WoW Classic community keeping the infamy of Barrens chat alive and well. 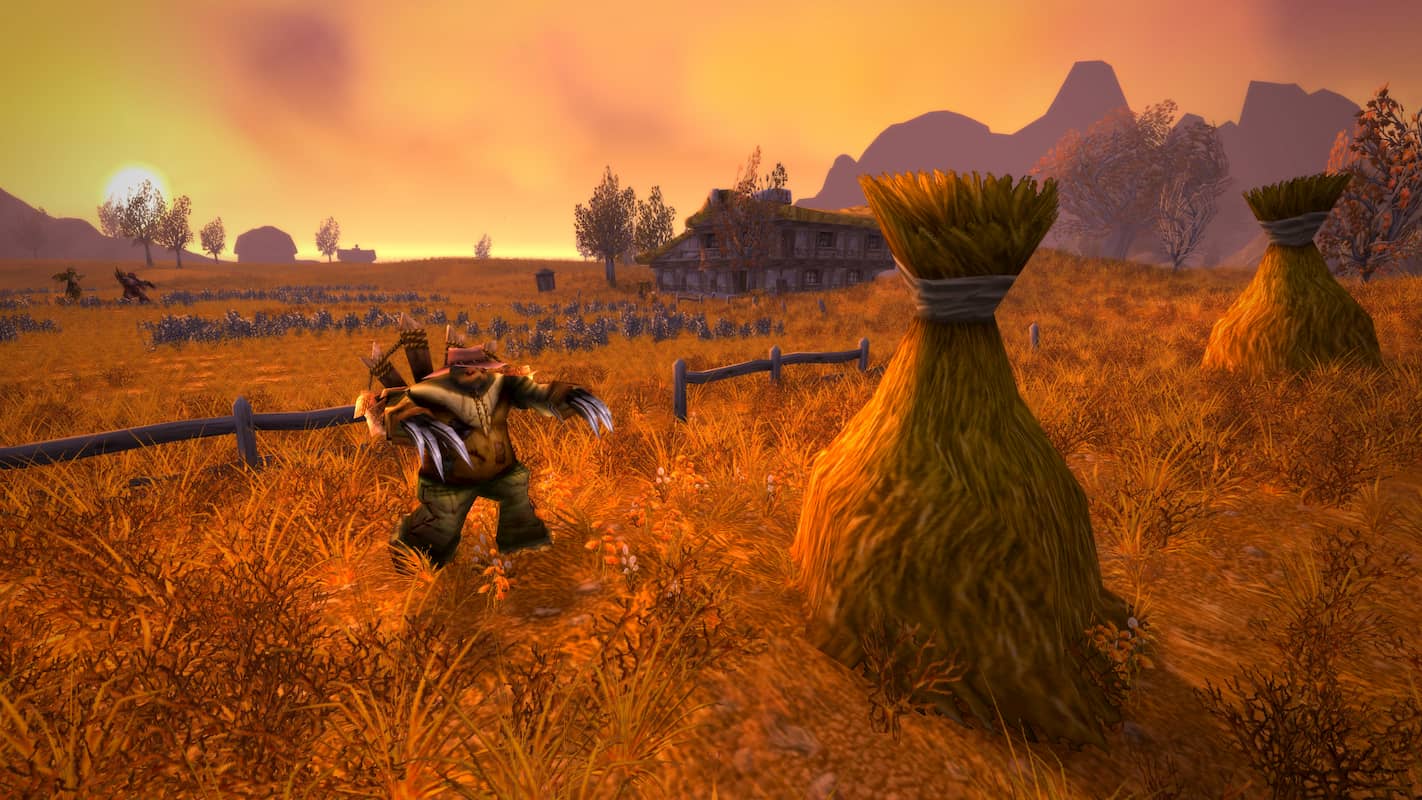 Despite the fact that the default chat channels can be a little rough, I have to say that everyone I’ve encountered while actually playing the game has been great. Everyone I’ve quested with has been polite and accommodating, and even outside of groups, the people I’ve passed on the road have been friendly, whether they’re giving me a buff or just greeting me with a wave as they run by.

With a large community also comes organic moments and events born of conflict between WoW Classic’s two factions, the Alliance and the Horde. Recently, I was questing on my own in the Hillsbrad Foothills, perhaps a little under-leveled for the region but getting by nonetheless. Hillsbrad is a contested area, which means that the Alliance and the Horde often clash in the region.

Sure enough, as I was questing with my underpowered Orcish rogue, I was killed a number of times by Alliance players who were much stronger than me. These Alliance players would post up on the main road out of Tarren Mill – a Horde settlement in Hillsbrad – and gank the low-level players that ventured outside the town. It was frustrating, but after enough ganking, the Horde players in the area decided to mount an answer. 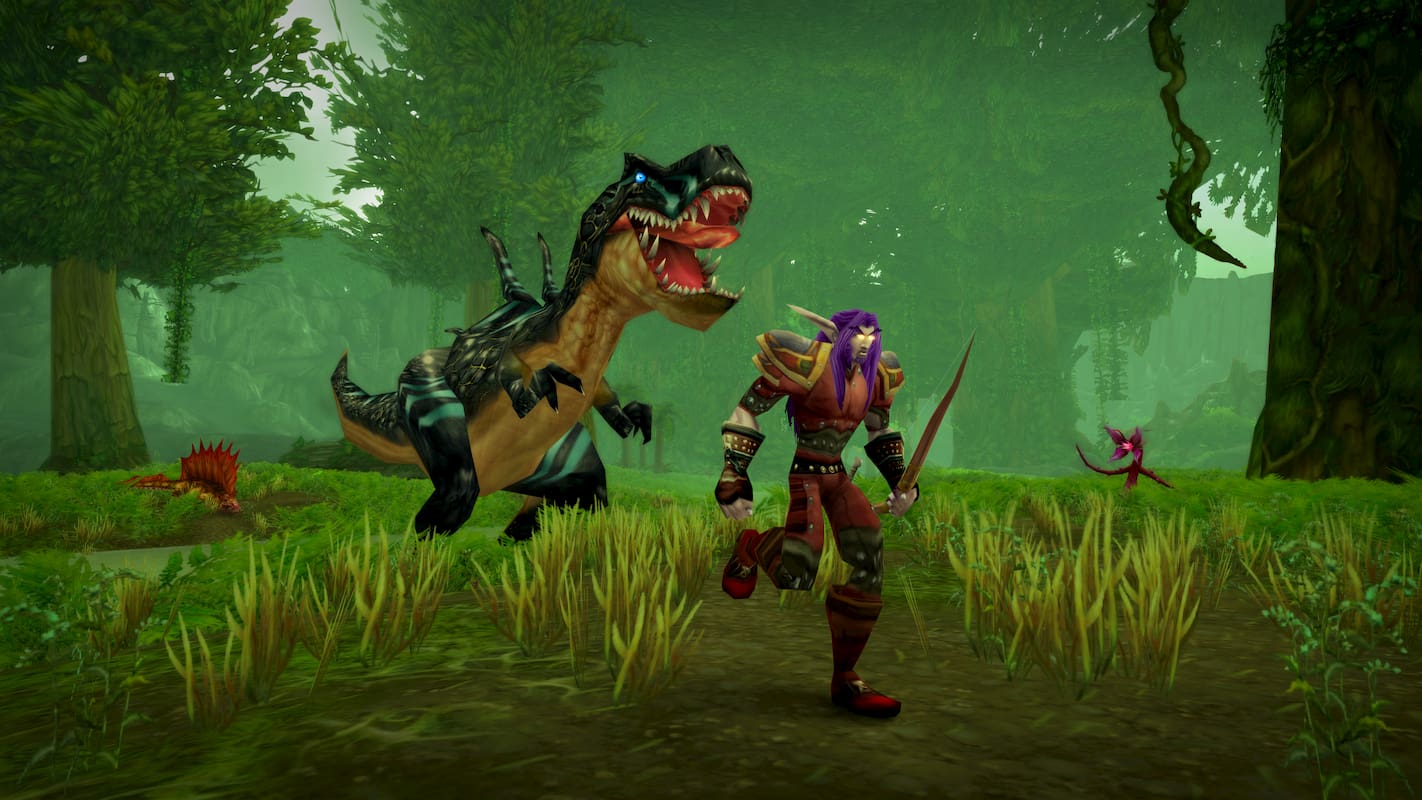 It’s moments like this, where users come up with their own solutions to ongoing conflict and adversity, that make WoW Classic worth playing. No game I’ve played in recent memory has matched this kind of community-driven gameplay experience. So far, there’s been very little toxicity in WoW Classic, and while that might change when more people hit the level cap and begin running end-game content that’s much more difficult, for now it just seems like everyone is happy to be here.

WoW Classic is a very satisfying game to play for a number of reasons outside of its community, too. Even something as simple as upgrading from common (white) to uncommon (green) gear or leveling up feels significant again. It’s definitely a slow-burn type of game, and because of that, WoW Classic won’t be for everyone, but for those who like this kind of gameplay, WoW Classic can be a very rewarding experience. 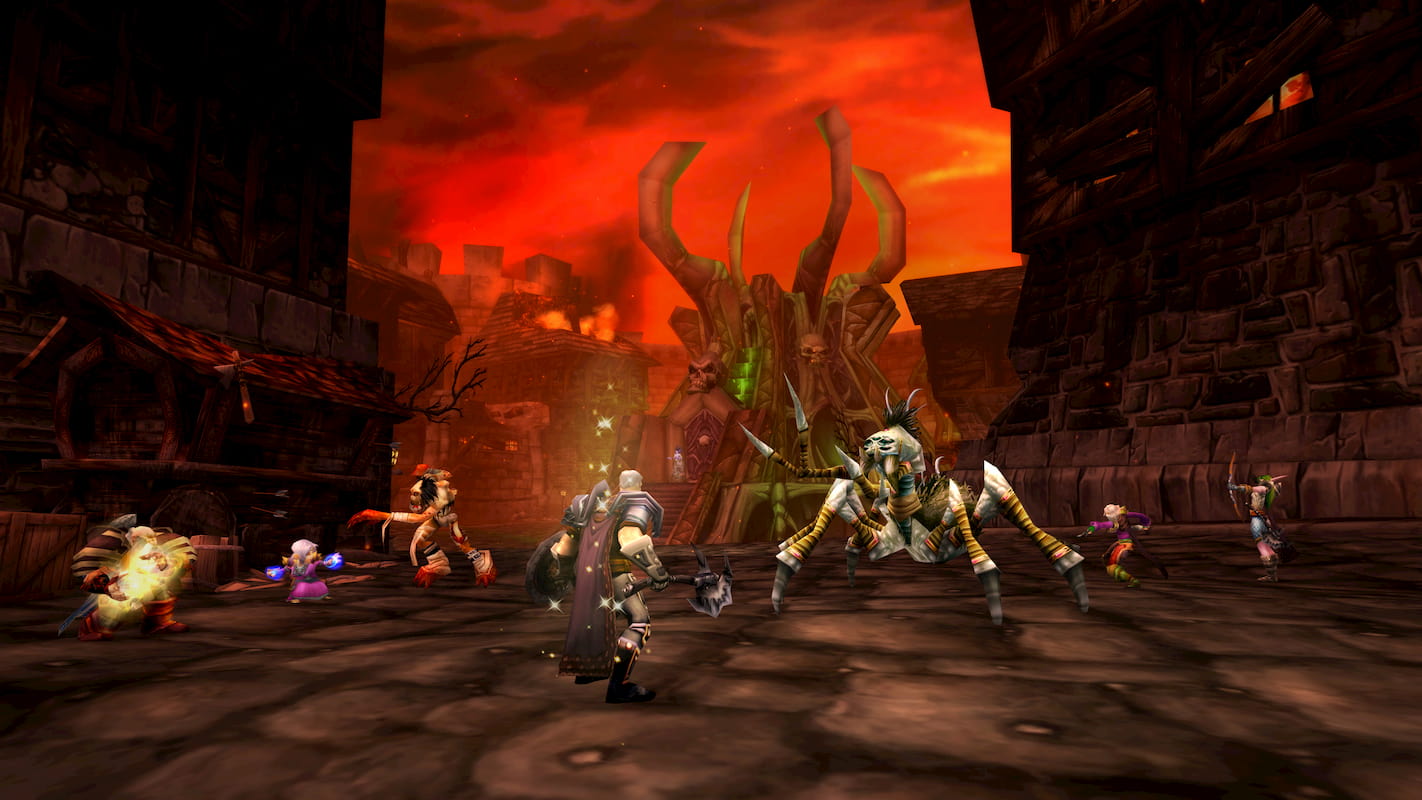 Obviously, since this is a game from 2004, there are some blemishes. The graphics aren’t that great, and getting from one place to another before you collect enough gold to buy a mount can take a very long time. There’s a lot of waiting in WoW Classic, whether we’re talking about travel times or waiting for unique enemies to respawn, but for me, that’s part of the charm.

For whatever problems a 15-year-old game may have, WoW Classic is still a wonderful experience. There’s nothing quite like exploring huge cities packed with other players like Orgrimmar or Stormwind, questing through all the different zones in Azeroth, or even just grouping up with some friends to go gank some unsuspecting Alliance players. Even with all of the additional content released over the years taken away, there’s still a ton to do in WoW Classic. I plan to stick with the game for a while yet, because even after a couple of weeks, this trip down memory lane is far from stale.