World of Warcraft Classic has been widely available for a little under a day now, and for many people, a lot of that time has been spent contending with mind-numbingly long queue times. Right off the bat, the WoW Classic experience emulates that of 2004 WoW pretty well. Obviously, long queue times can be nostalgic, but once you actually get into the game, you’ll find something that’s missing from a lot of games these days: A real feeling of community.

My time actually playing WoW Classic has been a surprisingly wholesome one so far. With packed servers, there are players roaming around everywhere, and nearly all of the ones I’ve encountered have been very friendly. Questing in WoW Classic is something that takes a lot of time and can be very difficult if you attempt to do it solo, but luckily, there’s no lack of people willing to group up and tackle these quests together.

As you might imagine, starting zones in particular are crowded beyond belief, which means that when you’re trying to complete any quest that involves killing mobs or collecting things from the world (which is pretty much every quest in the Valley of Trials at least), it’s nearly impossible to do on your own. This is where the willingness to group really comes in handy, and it seems like everyone in the starting zone is working toward getting the entire group out of there.

In one instance, I was tasked with retrieving a pickaxe belonging to an orcish foreman named Thazz’ril. Anyone who ever created an orc or a troll in vanilla WoW knows the quest I’m talking about, as you have to go into a cave and retrieve the pickaxe from one of the caverns within. The pick itself is freely accessible within that cave, so anyone with the quest can pick it up. 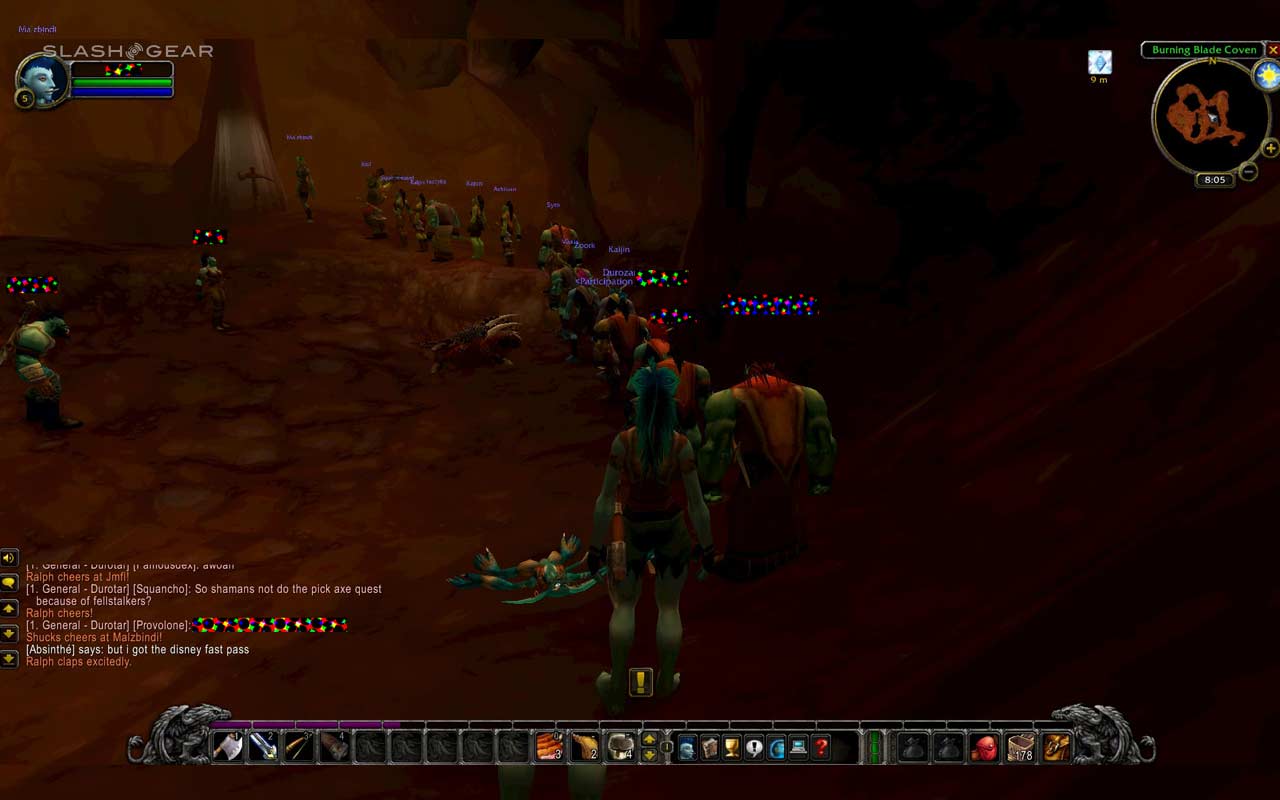 You might think that would result in a huge mob surrounding the pickaxe and trying to nab it the second it respawned, but when I made my way to that cave, I was greeted by the sight you see in the image above: an orderly line of people waiting their turn to loot the pickaxe. Most people who entered the cavern in search of the pick promptly fell in line with everyone else, and the few who tried to cut in at the front were promptly shouted down by everyone waiting.

That line says a lot about the WoW Classic community here at launch. Everyone knows that only one pickaxe at a time can be looted, so instead of forming a mob where the goal is to be the first to grab it, everyone got in line and decided to wait their turn. It was efficient, it was fair, and it was respectful of all the other players who just wanted to finish this quest and continue on with their adventure.

I’ve encountered plenty of other random acts of kindness in my short time with WoW Classic so far. From priests casting buffs on me as I pass by them on the road to other adventurers who bailed me out when I aggroed too many enemies and was about to die, there’s been no shortage of members of the community just being kind and helpful to one another here at the start of WoW Classic.

There was one point last night where I was grouped with a priest player to complete a quest in Durotar, and as we fought off Razormanes, he’d periodically pause to heal low-health players in other groups. There wasn’t really any reason for him to do that, since those people weren’t in his group and their success didn’t mean any additional quest progress for him. He was just doing it to help his fellow adventurers out, and it was a heartwarming thing to see.

SEE TOO: Here’s how to start playing WoW Classic

So many games these days fall victim to toxicity within their communities, so it’s very refreshing to see people being kind to one another in WoW Classic. Naturally, there are always some trolls in general chat, but for the most part, I really got the feeling that many people were just happy to be there, and that in turn led them to be nicer to everyone else. When everyone is having a good time, World of Warcraft can definitely be a thing of beauty.

Of course, that’s assuming you can get into the game in the first place, and with queues that span many hours, that isn’t really an easy thing to do at the moment. Though I’d argue that these long queues are part of the charm of WoW Classic, I also recommend that you power through them and join the game whenever you can – if you can get in, you’ll be greeted by a community that’s happy to be there and happy to have you – for the most part, at least.