Winter, er, the end of the Windows 10 free update is coming. And so will all the nagware and nag windows. Or at least promises Microsoft. However, that isn’t stopping the company from trying one last time to force convince users to upgrade before time runs out (for Microsoft). Don’t worry, it’s not going to suddenly pop up a window in the middle of your weather forecast. Instead, it will fully block your entire screen with the reminder. Considering that same style is used for serious error messages, it has some shock effect to make users perhaps unwillingly click on that “Upgrade Now” button.

Perhaps it isn’t far-fetched to nickname it the Purple Screen of Nag, in the tradition of Windows’ iconic Blue Screen of Death. Both are stress-inducing and devoid of useful information. Formally, though, Microsoft calls it the “Windows 8.1 and Windows 7 SP1 end of free upgrade notification”. I think I’ll stick to my easier to remember “PSON”. A rose by any other name, it serves the same purpose as the popups that Microsoft has so kindly removed once and for all (hopefully).

If this latest news reeks of desperation, it’s because it most likely is. Officially, Microsoft wants to spread the joys of Windows 10 to everyone. After all, who wouldn’t want to be running the same platform running on a smartphone, Xbox, or even HoloLens? Unofficially, Microsoft is in a hurry because it knows that the moment the free gravy runs out, people are less likely to upgrade to Windows 10 anymore until the very last moment.

It’s not that Windows 10 is that horrible, at least compared to the catastrophes that were Vista and 8. It is, of course, not perfect, and many users have reasons to hold off the upgrade, valid or not. But whatever benefits and good things that Windows 10 might be offering is getting drowned out by the incessant upgrade reminders that Microsoft is shoving into people’s faces, leaving a very bad taste in their mouths even before they have tried Windows 10. 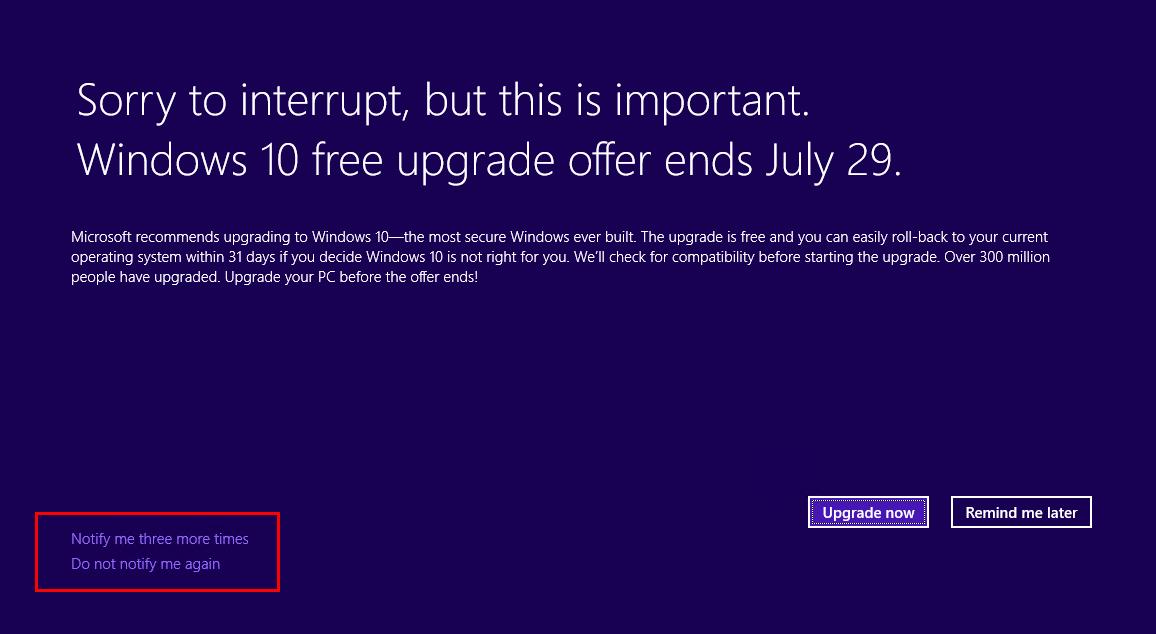 The one silver lining in Microsoft latest nagware is that the screen does offer a way out, both from upgrading as well as the nagging. Highlighted in the image above is the not so obvious options to never be notified again, ever, of upgrading to Windows 10 for free. If you do plan on upgrading but just not now, you can opt for “Nag me later” or “Nag me three more times”. Hopefully it won’t do so in the middle of your critical business presentation.