It seems that Microsoft is developing a pattern lately. After a flood of good news comes the fine print and some sad, if not worrying, follow ups. First it was the speculation that the lure of a free Windows 10 upgrade for pirated copies of Windows might not be so sweet after all. Now it seems that Microsoft will potentially ostracize another group of computer users: those who dual boot operating systems. Slides from its presentation in China seem to hint that Microsoft won’t block OEM’s from prohibiting users from disabling secure boot.

Secure Boot is the functionality that, in theory, would prevent the installation of uncertified and potentially malicious versions of an operating system behind the user’s back. While a logical and in fact desirable security measure, it has become a stumbling block for those who would want to install some other operating system that was not intended by the OEM, like Linux, BSD, or even something like Hackintosh. In Windows 8, Microsoft actually mandated that OEMs who want to put a “Designed for Windows 8” sticker on their product must allow users to turn of Secure Boot, which gave such users some relief.

A slide from Microsoft, however, would seem to imply that it will no longer coerce OEMs to do so. While it isn’t exactly saying that OEM should not allow users to turn off Secure Boot, it is making it optional, leaving the decision to the OEM. Mobile devices have it worse, though, with Microsoft actually requiring OEMs to disallow turning it off at all. While it’s optional for desktops, OEMs are likely to take the route of least resistance, which means they will exclude that switch to turn Secure Boot off. 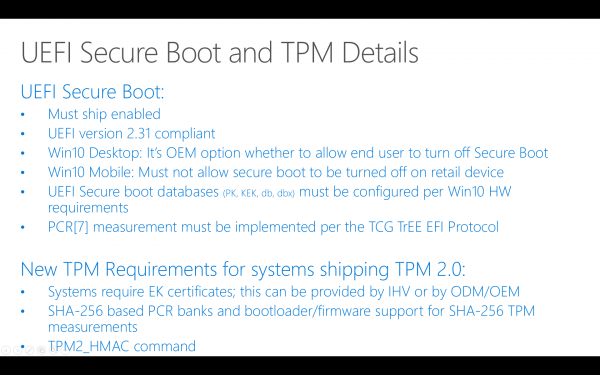 Of course, it’s not exactly surprising that Microsoft wouldn’t bend over backwards to support operating systems other than its own, and there has been already some worries back in Windows 8 that Microsoft would actually actively block the installation of Linux and such. The problem, however, is that the hardware “Designed for Windows 10” would also be hardware that owners would like to install Linux on. Now the burden and the blame of locking out such users will be on hardware vendors.

That said, it’s not completely gloom and doom for Linux users. Some Linux flavors, like Ubuntu and Fedora, already have ways to install and work on computers even with Secure Boot enabled. That, however, still leaves out the dozens of Linux distributions that don’t have access to such signatures.