Will Crysis 2 ever see DirectX 11

For those that don’t know much about Crysis 2, it is a futuristic first person shooter based in New York City. It is the highly popular sequel to the original Crysis that was released for PC only. For anyone that played it back when it was released the graphics were simply stunning. It brought my powerful quad core and my GTX 260 graphics card and computer to its knees real fast. Most gamers in the PC community were just as excited for Crysis 2 as I was, then we heard it would be launching across all 3 major platforms. This is where the DX11 discussion comes into play.

Obviously the Xbox 360 and PS3 are more than a few years old, and clearly do not support anything near DX11, or even DX10 for that matter. I’m not going to get into the dirty details regarding this, but clearly a game like Crysis 2 on consoles will present a challenge, and it did. There has been a lot of talk about DX11 for PC, why it was missing, and reports of it coming soon have been posted all the time since the game launched back on March 22nd. As things sit today we still do not have DX11 for Crysis 2. Other than the graphical changes to the CryEngine used in the game, it runs on the same DX9 that the original Crysis from 2008 did, and even Crysis had DX10 support unlike Crysis 2. So why the somewhat “downgrade” for the new big hit? Compatibility and development for consoles is the reason behind that.

According to stories like this one from Eurogamer, a DX11 patch was on its way and would be here soon, but that was very quickly put to rest by a few people from Crytek/EA. A spokesperson for publisher EA added “We have not made any official announcements about a patch yet.” That was back in March right after the game had launched and all the fanboys were still angry we didn’t have DX11 or any advanced graphic settings in game. Why does all this matter you might ask me? Below is two photos. The first is a screenshot of Crysis 2 on PC, the second on xbox. Clearly PC looks better, but for the superior hardware used on the PC (GTX 590) it should look a lot better. 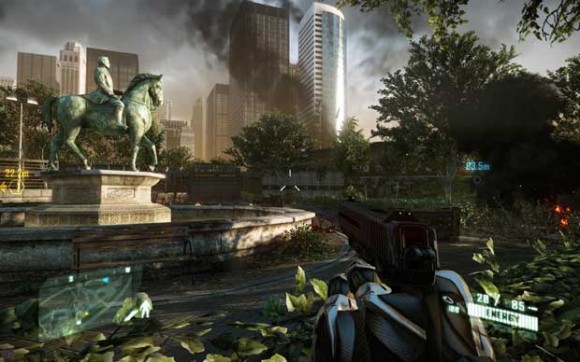 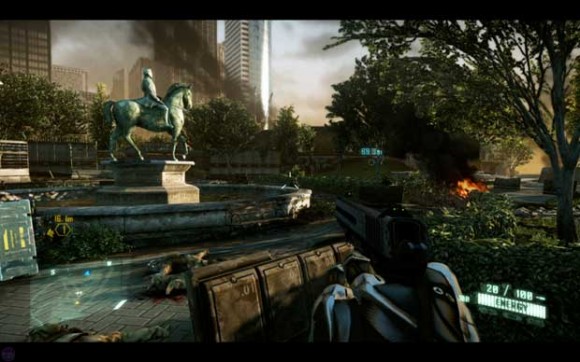 In writing this I don’t want to get into the console vs PC argument or anything. Maybe PC users need to just relax and enjoy the game. When they all loved the original and were super excited for Crysis 2 and DX11 on Windows 7 they all upgraded their graphics cards, pre-ordered the game, and then the demo came out and there was DX9 only. Upon waiting for the actual game to come out they were only let down to see we didn’t have any advanced graphic options in game. Such as AA, filtering, bloom, shadow details and more. All of those were available to be adjusted on the original game but missing in Crysis 2.

This is all old news, I just felt like writing up a little information about it with the pictures above and maybe stir the DX11 pot some more. I can only imagine what Crysis 2 will look like on DX11, probably amazing. I do know the single player campaign is much longer than Homefront, so that is a plus.

Just in case anyone is worried, or missed it a Crytek employee posted on the development forum that a DX11 patch is in the works and is coming. We first heard about this here so that is good news. If it takes 2-3 months to release will it be too late? Or will gamers play it again with DX11 enabled? I know I would. Will they even release this patch? For now you can do some graphic tweaks and changes with an application that is floating around, get more details on that here. So what do you gamers think about this, are people making to big of a deal out of nothing? Or should we all have DX11 and graphic enhancements on a game released 3 years later than the original? Just thinking out loud.