It’s time for the iFixit teardown of the Wii U, bringing on more details about this device than you could ever possibly want to know about. Starting with the basics, it’s found that along with NFC and either 8GB or 32GB iterations for internal storage, this unit has USB hard drive support, AMD Radeon-based High Definition GPU action, and a fabulous IBM Power-based multi-core processor. All that we know about – that and the 6.2-inch 854 x 480 pixels LCD panel on the touchscreen controller as well as a disk slot, sync button, SD card slot, USB 2.0 x 4, HDMI, AV multi-out, and sensor bar connector on the main unit.

The back of the device has a tiny CMOS battery you’ll likely never need to remove, while the main casing for the unit is shown to be extremely easy to access and open. It’s found that about 1/3 of the weight of the whole console is accounted for in the optical drive alone – iFixit suggests that this giant unit could be in place because it’s likely less expensive than its slimmer companions. This savings would therefor be passed on to you, the consumer, allowing the Wii U to be as inexpensive as it is on the market today – another possibility is that it allows for more breathability and quieter operation than a slimmer drive. 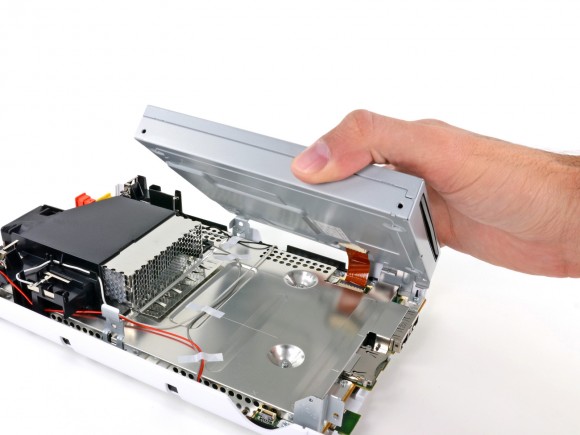 On the motherboard its found that this unit uses several pieces of Broadcom hardware, including the same Wireless Module used in the Roku 2 XS. This unit also uses a Broadcom Bluetooth 3.0 module. The AMD Radeon-based GPU and the IBM Power-based processor are placed rather close to one another physically so that – as iFixit suggests – they might reduce latency and power consumption as much as possible. Also inside is a Panasonic HDMI controller, Samsung eMMC 8 GB NAND Flash/Memory Controller, and Samsung 4 Gb (512 MB) NAND Flash.

The wireless touchpad controller is also torn down and found to contain a lovely 3.7 V, 1500 mAh rechargeable battery. The battery compartment is also shown to have extra room for an extended battery that will likely be appearing in the accessories aisle before the holiday season rolls around. The inside of the wireless controller is filled with mostly empty space, believe it or not, with the motherboard having lots of room to breath. This board works with a Broadcom NFC controller, is powered by a Broadcom BCM4319XKUBG, and uses a fabulous Texas Instruments Low Voltage I/O Touch Screen Controller. 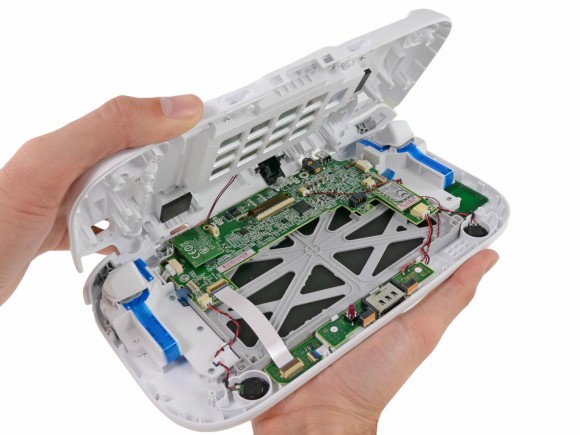 This entire unit was rated a rather pleasing 8 out of 10 for repairability by iFixit, this meaning you’ll be able to fix everything yourself with only a few exceptions. Have a peek at the timeline below to see other rather recent stories surrounding the Wii U and see how big this machine gets in the weeks to come. It’s already sold out across the USA unless you’re really lucky and happen across a retailer with a few sets left!