It’s not often we have to wear protective goggles when testing out a new gadget, but then this isn’t your average laser. Wicked Lasers specialize not in the basic presentation pointer you might have hanging from your keychain, but in incredibly high-power lasers with astronomy, entertainment and, yes, military use. The Spyder II GX we have here is, at 200-300mW, “the world’s most powerful handheld laser,” and carries a pricetag of just under $1,700.

Putting aside for a moment the obvious question most people have asked – “why?” – you certainly get a well-machined device for your money. The Spyder II GX casing is made from aircraft-grade aluminum, hard-anodized in black to military-specs. It measures 210mm x 26mm and weighs in at 240g with one of the two included rechargeable 1150mA Li-Ion batteries. Operation is simple: press the latching on/off button at one end and, at the other, you get a bright green laser.

Now when we say bright, we mean it. The goggles aren’t a fashion statement here, they’re an important safety consideration; look into the dangerous end of the Spyder II GX and you can lose your sight. It’s something to take into account whenever you have the laser out, not only your own eyes but, since reflected beams from the Spyder will happily bounce around for miles, the eyes of anybody nearby.

In use, you can instantly see that this is a commercial-strength laser. Point it at a wall indoors and you get a simmering bubble of green light that’s enough to dazzle anyone without eye-protection (this would be bad for a PowerPoint presentation). Point it out the window and, during the daytime, you can project a bright green spot onto buildings hundreds of feet away. At night it gets even more impressive: not only can you see the end-dot, but the laser beam itself is visible. 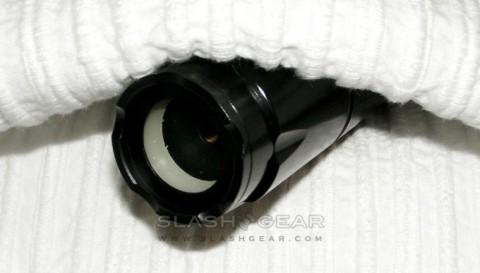 That probably leads us back to the “why?” question. Part of Wicked Lasers’ FAQ deals with practical uses for their products, and while they acknowledge that the average user is an enthusiast looking for an entertainment device, there are also a fair few other applications. The night-time performance of the Spyder II GX singles it out as ideal for astronomy, with the laser being used to trace out constellations or, mounted on a telescope, for improving aim. Fiber optic technicians apparently also use the Wicked Lasers range for testing lengths of network cabling, while outdoor work sites appreciate the fact that they’re daylight-viewable for aligning pipes and walls.

In less than careful hands, there’s a bag of other uses. The Spyder II GX is powerful enough to burst a balloon (and we mean with the laser, not using it as a cosh), singe dry leaves or burn through plastic bags and electrical tape. We were unable to actively light a fire with it, but to be fair Wicked Lasers never claimed that it would; there are aftermarket lenses available which will focus the beam and make fire starting possible.

On the couple of occasions we pointed the laser at skin, the effects were noticeable. There’s no light-saber-style cutting or cauterizing, in fact there’s not so much a sense of heat as an uncomfortable stinging sensation.

It’s rare for us to review a product that, while it does exactly what it claims to, we’re cautious about recommending to SlashGear readers. The caution here comes not from the Spyder II GX itself, which as a pro-strength laser does everything you could want it to, but from the potential hazard if not used, or stored, safely. Saying that, those factors are not really Wicked Lasers’ fault, and the $1699.99 price tag is likely enough to dissuade most of the casually careless. If you need extreme laser performance, particularly for astronomy, we feel confident in saying that the Spyder II GX will fit the bill.