Why does Princess Leia have a British accent in Star Wars? Retconned at last!

At long last, an original Star Wars (A New Hope) faux pas has been foiled, and it’s thanks to fiction writer Claudia Grey. She’s the author of the newest Star Wars book: Bloodlines, and she’s taken aim with its main character Leia Organa. The problem? Leia speaks with a British accent in A New Hope while being interrogated by Grand Moff Tarkin. She never does that again. The solution? Grey says she meant to do that.

That may not be true – but so what? As an author of modern Star Wars books, official books at that, Grey has the ability to go back and write in details for characters that were in previously released films. She needs to have her book – and the ideas within – approved by the heads of Star Wars lore, of course, but she’s in the clear. She’s done it. This is what’s really, truly, entirely true in the Star Wars universe now.

In an interview with EW this week Claudia Gray spoke about her upcoming novel Bloodline. Otherwise known as Star Wars: Bloodline, this book takes place after Return of the Jedi and before Star Wars: The Force Awakens. 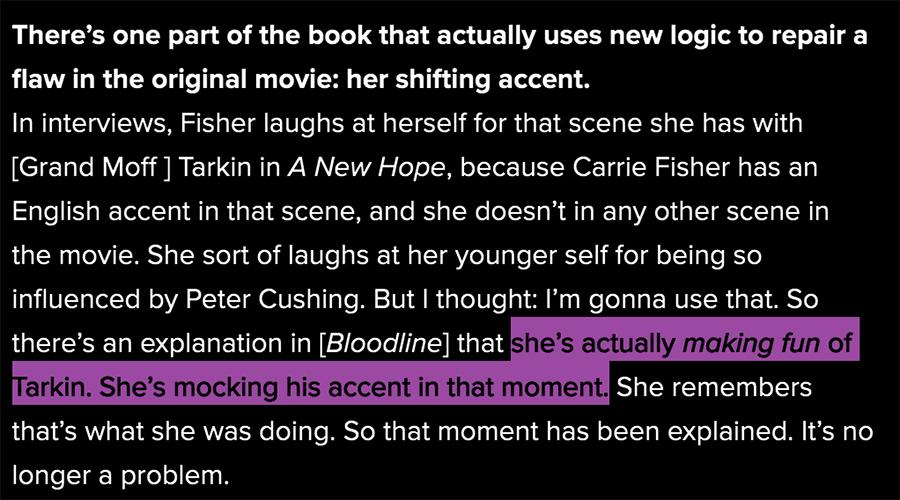 In this book, a single moment’s recollection has Leia’s original British accent explained.

Apparently it was because of Peter Cushing’s influence that had Fisher saying “slip through yor fingehs.”

Have a peek at the video below to remind yourself of what this scene was – and what it means to you now. Feel any different?

We feel a bit more satisfied, to be sure.

Stick around SlashGear’s Star Wars tag portal for more, and be sure to have a glance at our ever-expanding Star Wars Twitter – the Tosche Station of Star Wars news and oddities.