The TSA will be wasting time and money re-testing hundreds of the millimeter wave body scanners after workers apparently forgot to divide by ten on their paperwork. These erroneous results came up in the last round of tests. They are meant to measure the radiation the agency zaps members of the public with daily. No worries, it’s all in the interest of security. The reported radiation levels were ten times higher than expected. “We understand it as a calculation error,” said TSA spokesman Sarah Horowitz. The TSA reports that the units will not be taken offline for the testing, as they are still perfectly safe.

That sounds pretty bad at first glance. Ten times the expected dose of radiation seems like a lot. Rapiscan, the company that contracted with TSA to provide the machines, explained the matter in more detail.

“Oftentimes, the FSE (Field Service Engineer) will bypass the step of dividing by 10. While the resulting entry, at a pragmatic level, is understandable on its face and usable for monitoring purposes, the value, if read literally by persons unfamiliar with our system and the survey process, would imply energy outputs that are unachievable by the Secure 1000 Single Pose,”

That’s straightforward. Rapiscan has also promised to rewrite the sheet that the field technicians use to collect the data. They hope to make it clearer so that future FSE’s will not run into the same problem. 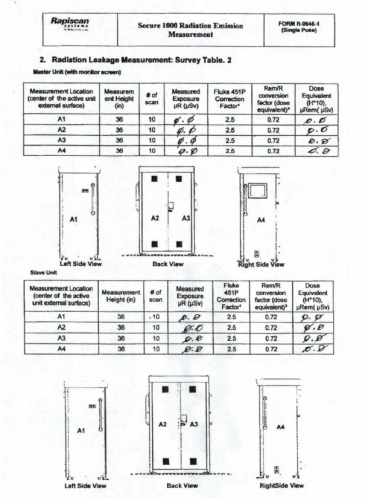 For other news regarding the full body scanners check out our other recent stories here or here.