Who will win, Trump or Clinton? Digital Election Results Live

Welcome to the year 2016 and November 8th, the day where the United States votes for their next President. In this futuristic time, we’re able to watch some results of the election as they happen. Aside from the inevitable recounts in some close-race regions, today we’re running down the best ways in which you can watch the election unfold over the next day-or-so.

To be clear right up front, there’s not a lot of accurate information that can be gleaned in the next 12 hours (from when this article is released). Starting this evening, there will be a mad frenzy of activity in all major news portals. Results will be reported by State Election Offices soon after polls close.

Live Results straight from the source

Through these websites, everyday citizens will be able to access voting results as fast as they’re tabulated. Each district differs in the way they report, but this method will allow anyone to see results quickly. Of course doing this sort of checking will require lots of work for one individual – so there are other options.

The next best thing (and quite a bit easier)

Every person with a smartphone or tablet will be able to see Google’s own election tabulations in real time through the Google app. For Android users, this requires a search with Google for “Election Results” or an “OK Google, who is winning the election?” As you’ll see in the image below, Google’s display of results should be rather easy to navigate.

One of the most accurate predictors of Presidential Elections here in the United States over the past couple of elections. Founded in 2008, this aggregation of polls and past election predictors correctly predicted the 2012 presidential election in all 50 states. Their FiveThirtyEight live blog is packed full of interesting information about the election as it unfolds.

How do I report voter fraud or voter intimidation?

Voter intimidation and to a much lesser extent voter fraud may become an issue this year. The first thing any individual should do if they see or record voter fraud is to contact their state’s main election office (list link found above.) Witnesses can also contact the Voting Section of the Civil Rights Section of the United States Department of Justice. 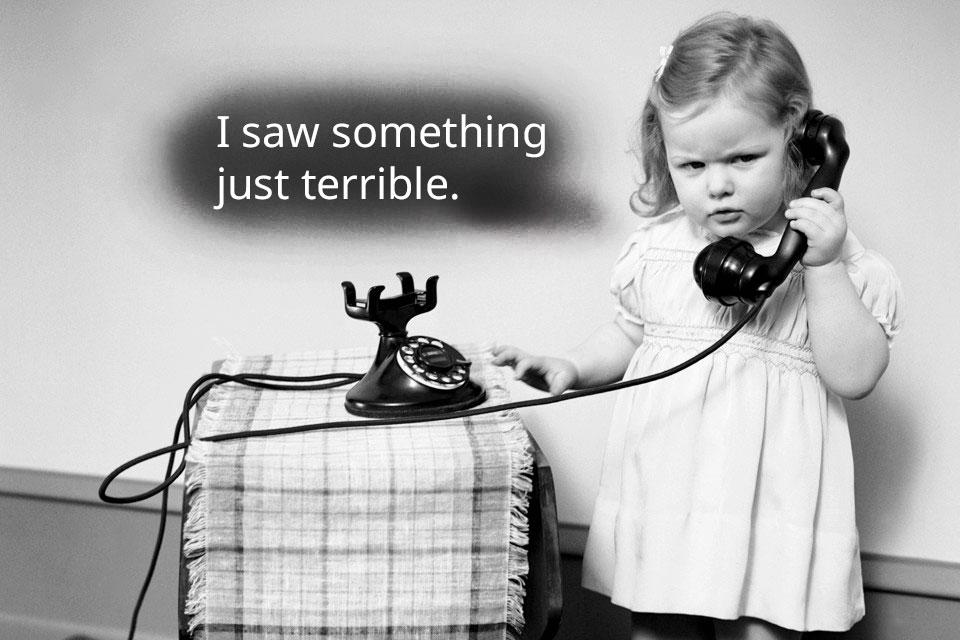 If any individual witnesses voter intimidation, they should file a complaint with the Voting Section of the Civil Rights Section of the United States Department of Justice (as linked immediately above). Voter intimidation can also be reported to this department by calling 1-800-253-3931 or by emailing voting.section@usdoj.gov as quick as possible.

How late are the polls open?

Below you’ll find an interactive map prepared by the United States Election Assistance Commission. This map shows all 50 states, each click or tap-friendly. Each tap shows links for Election Day Workers and 2016 Voting Information for each state.

Below you’ll also find a map which shows what time polls close in each state. Note that the times shown here are all Eastern. This map is primarily made for people watching closing times across the United States, but can be used by anyone – so long as they convert the time. Another rather important list of closing times is in Electoral Votes. 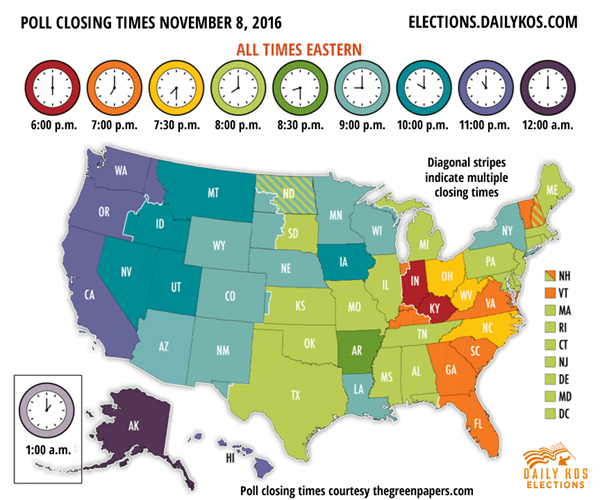 For a full list of times when Electoral College votes are required to be submitted, head to TheGreenPapers. BE CAREFUL though, as this webpage’s helpfulness is inversely proportional to the amount of eye-searing green color on the page. Don’t be mislead by the green, it’s really an extremely helpful and legit website with accurate information abound.

For those of you not sure what’s on your ballot, head to the State Election Offices list linked above. Each page will have its own full ballot available for your perusal before you head in and vote. Every single state has a different set of measures and state-level politicians to vote for.

For everyone: don’t be mislead by early results and “calling it now” news sources. Don’t take out any bets or trade any stock based on exit polling, that is to say. This election will only officially be over when it’s declared by the Federal Election Commission, and even then we’re going to expect a little bit of grumbling, at the very least.