WhatsApp is adding an easier way to fact-check forwarded messages, a shortcut to potentially better debunking viral information and fake news. The new tool adds to the messaging service’s limits around forwarding that were added back in April, and which were billed at the time as a way to stem the spread of conspiracy theories and false claims which had proved to be rampant.

The answer at the time was a special “forwarded” label, which WhatsApp users would see appended to messages in chats that had been forwarded many times. Resembling two overlapping arrows, they’re meant to indicate that the message hasn’t, in fact, come from a close contact, but instead merely been pushed into a chat from another source.

WhatsApp also has limits on how many times such forwards can be sent at once.

Even with those constraints, however, there’s no denying that it can be easy to sway WhatsApp contacts with forwards that have more hype than truth to them. A new tool being rolled out today adds search to such messages. Tap the magnifying glass icon, and it pulls up a browser window which runs a Google check online for more background information. 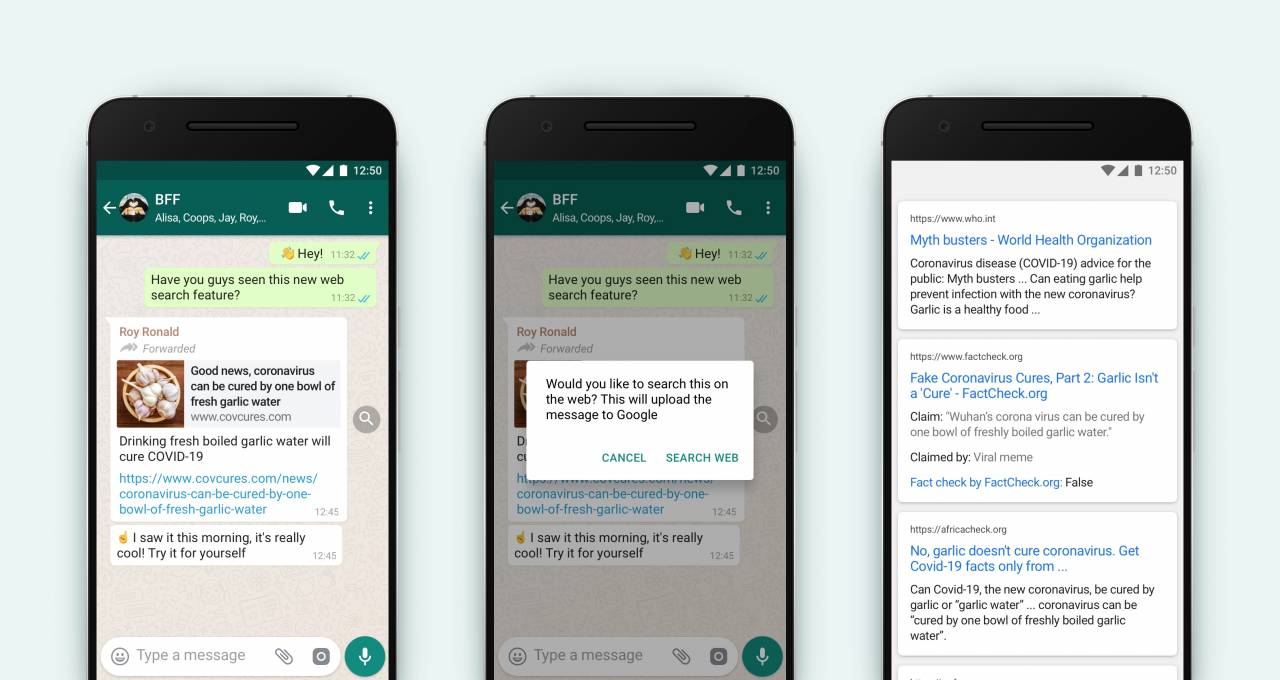 “Providing a simple way to search messages that have been forwarded many times may help people find news results or other sources of information about content they have received,” WhatsApp says. “This feature works by allowing users to upload the message via their browser without WhatsApp ever seeing the message itself.”

In WhatsApp’s example, a fake COVID-19 claim that drinking boiled garlic water can cure the virus is fact-checked with a Google search. That brings up several results countering the viral meme.

Of course, the reality is that any such research is only as useful as the data being queried and the audience consuming it: that is to say, it’ll depend on what results Google has to offer up, and how willing the reader is to accept the validity of those results. Given the politicization of news and media sources, it’s not hard to imagine someone using this new WhatsApp tool to run a search but then discount what they’re reading because they don’t necessarily trust the origin of the debunking.

WhatsApp says this new “search the web” feature will roll out today, in the US, Brazil, Italy, Ireland, Mexico, Spain, and the UK. You’ll need the latest version of WhatsApp – either on iOS, Android, or WhatsApp Web – in order to see it.