The new Apple iPod Shuffle announced just yesterday, many, including us, are still curious about the feature of the third-gen shuffle, but the iFixit crew managed to locate one and has it dismantled right away.

The disassemble was well documented with photos, details and steps to show its content and inner electronics. Under the knife, there’s a IC chip containing CPU, RAM and 4GB of flash memory; a 3.7 volt lithium-polymer battery soldered to the logic board; and another unit of component that held the headphone jack and shuffle switch together. That’s all to it.

Back to regular channel, the content of the box includes the iPod Shuffle, an Apple Earphones with an in-line remote, a short ran of USB cable and a quick start guide. 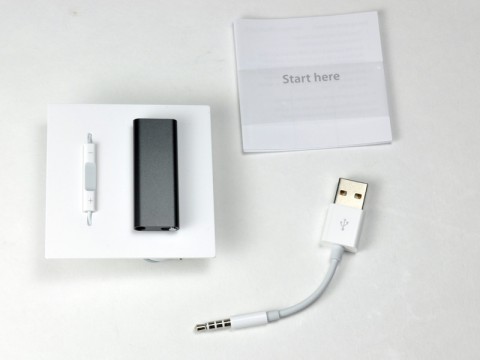 The voice-over feature, according to iFixIt, must first be downloaded via iTunes and the included headphone offers “two buttons for volume control and a center button for playback control. The center button can be clicked once to play, twice for the next track, and three times for the previous track”