What is Li-Fi, and how practical is it in the real world?

Li-Fi stands for Light Fidelity, and it’s being presented at this time as an eventual replacement for Wi-Fi-transmitted internet. While the term Li-Fi actually does stem from the term Light Fidelity, the word Wi-Fi stems from Hi-Fi, or High Fidelity, from the audio term for home audio, high-quality sound production. The people presenting Li-Fi have taken the concept of the Signal Lamp (aka the Aldis Lamp), sending morse code between ships at sea, instead sending data to your phone. Li-Fi is also known as visible light communications (VLC) technology.

A company by the name of Velmenni has produced a lightbulb that works with Li-Fi technology on a small scale. They are not the first to prove the technology works, but they are the first to carry out a “real-world test.” Their demonstrations have shown data transfer speeds of around 1 Gbps, or just around 100-times faster than the average Wi-Fi data speed in the USA today.

Below you’ll see Velmenni using this technology with a smartphone.

Harald Haas is a physicist and professor of mobile communications at the University of Edinburgh. He was the first to coin the term Li-Fi, doing so at a TED Talk during TEDGlobal 2011. Haas also coined the term visible light communications (VLC).

Below you’ll see Harald Haas’ Li-Fi TED Talk – where Li-Fi was essentially made public – recorded back in 2011 in the month of July.

This man also created the group pureLiFi, and announced near the end of November, 2015 that this company would partner with the company Lucibel to “co-develop and market Europe’s first, fully industrialized LiFi luminaire.”

That means they’re making a lightbulb with Li-Fi technology inside.

Li-Fi depends on your device being within range of the light being transmitted by your Li-Fi bulb. You literally need to be able to see the light to get the data. 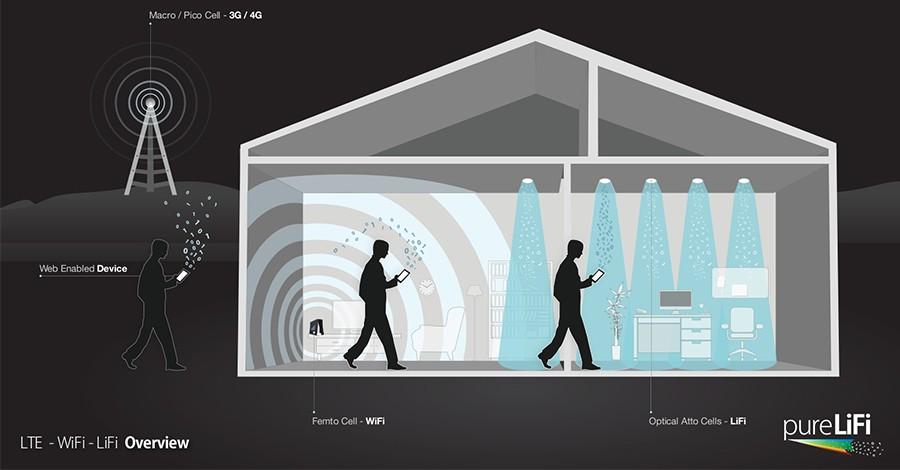 In the image of the house you’ll see above, you’ll see how cellular towers and “mobile internet” connects you outdoors (and indoors, of course), while Wi-Fi remains largely indoors. Wi-Fi connects you just so long as you’re within range of a Wi-Fi router, around corners and through walls.

Again, Li-Fi requires that you be in the stream of light being emitted by the light source. This limitation does not seem to be deterring creators like Haas, who suggests that “these opportunities are on a similar scale as the photography industry’s move from analogue to digital technology.”

The roll-out of Li-Fi technology is not an absolute lock. This is still a relatively new technology, and not one that’s going to take over or negate all past technologies – mostly because of its present limitations.

Instead, you can imagine Li-Fi to be an addition to the internet transmissions technologies that are already in use today.

You can think of Li-Fi vs Wi-Fi or Mobile Data sort of like a gaming console (like a PS4 or Xbox One) compared to a gaming PC. While gaming PCs might be moving faster and providing a more hi-fi experience for gamers, there are still going to be masses of users sticking with a console for years to come – if only because it’s more convenient to play games on one’s own TV.

Will you be an early adopter, or will you wait for a large roll-out worldwide?