That Guardians of the Galaxy 2 shirt worn by Star Lord: what’s on it?

Guardians of the Galaxy Vol 2 features a new costume for Star-Lord, aka Peter Quill, aka Chris Pratt. This new costume features a t-shirt with a coded message on it – and you know we can’t resist investigating. As such, we’ve done some decoding, some tearing down of graphic design, and a bit of research figure out what’s going on with this cosplay-essential bit of Star-Lord / Guardians of the Galaxy costuming.

To figure out what the shirt says, the first thing we did was check out and see if anyone else already did the work. As it turns out – someone sort of did. Sort of. Over at ComicBook dot com we have Charlie Ridgely, who spoke with Chris Pratt at a press junket (likely) for Guardians of the Galaxy Vol 2. There, Chris Pratt gave just a bit of information on the shirt design.

“Somebody can, because it’s a real language apparently. They’ve created a real alphabet, but it’s from – I think, I might be making this up – I think it’s from a candy wrapper from the first movie.” said Pratt. “This is like a space brand of some kind so it’s like on my shirt the way anyone would be wearing an ironic Reese’s Pieces shirt or something like that.”

While it’s possible the candy wrapper bit MIGHT be true, the part about a “real alphabet” is definitely true. The alphabet is a near-full replacement set of letters from the folks at Territory Studio. They specialize in motion graphics and interface design.

Per the Territory Studio project page for Guardians of the Galaxy, we’re going to need to look to one typeface in particular. The letters on Star-Lord’s shirt are from Territory Studios’ “Klyn” typeface – or Kyln, to be more proper, but it’s listed as Klyn. 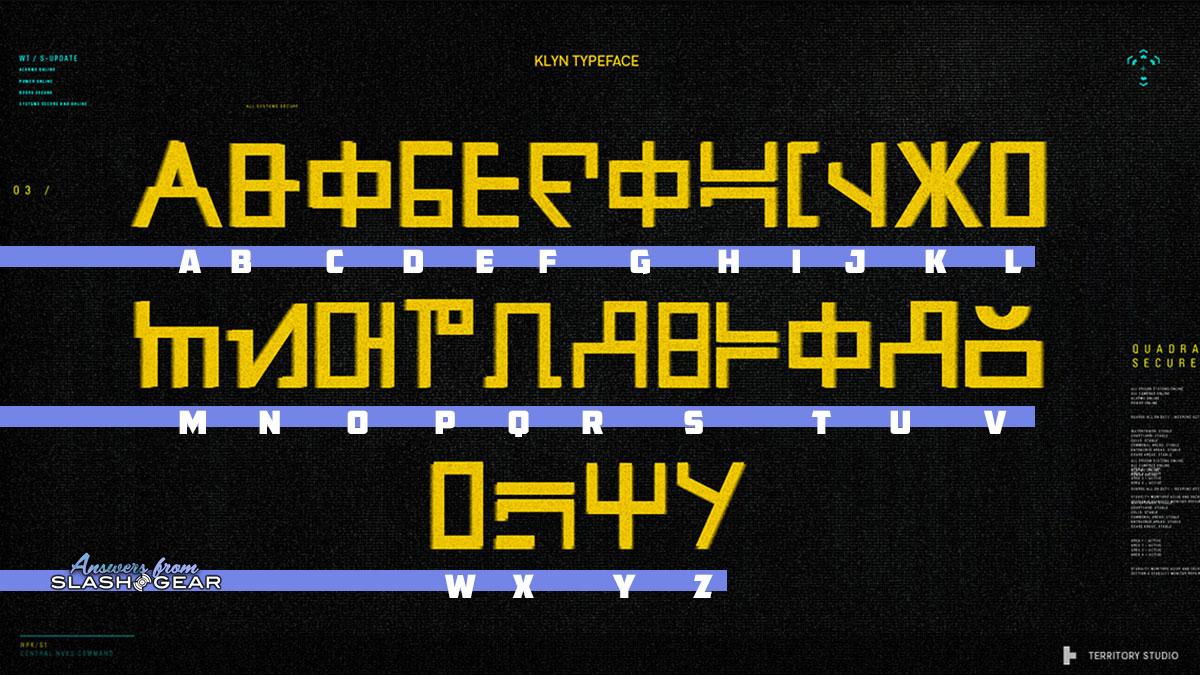 Each letter is given its own replacement symbol, but the first plate we see here does not appear in alphabetical order. In fact given the look of the symbols in the order they appear in here, it would seem that they’re almost in this order to confuse onlookers on purpose. That “A” is certainly not an A. 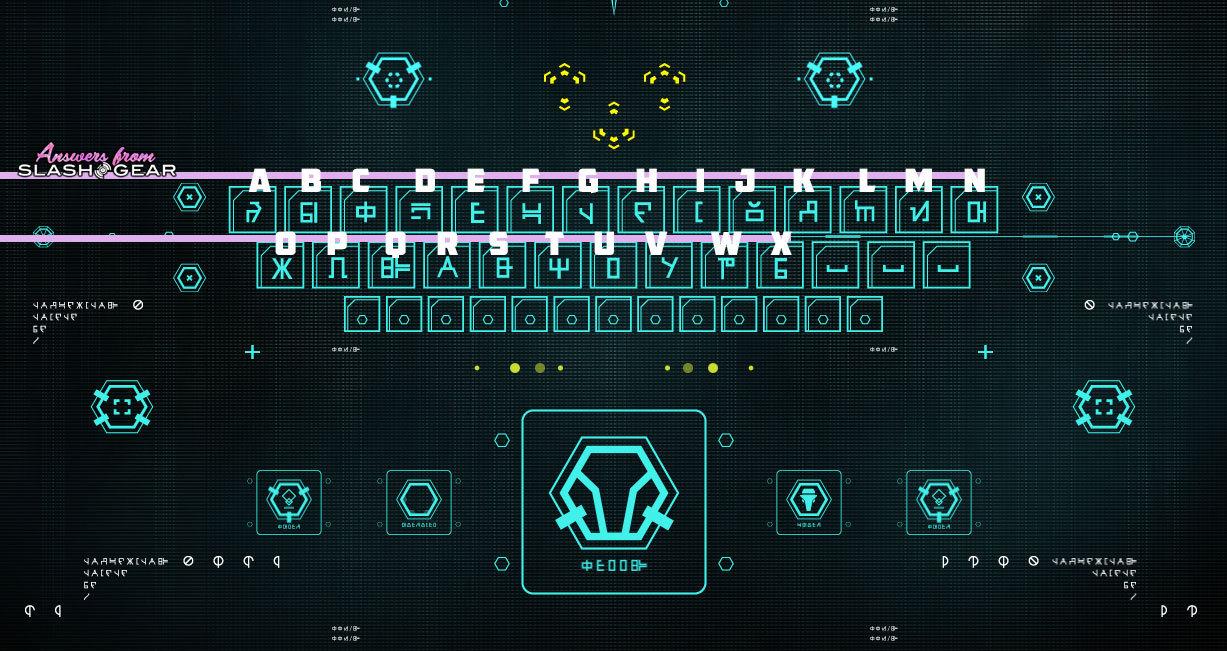 This keyboard is odd to decode because there aren’t enough letters here to fill the whole alphabet. We’re just a couple short. This is a bummer because one of the characters we’re trying to translate is not on the keyboard.

Four full months ago, a Reddit user by the name of OooChimpanzeeThat solved the first part of this puzzle. He or she found the Kiln keyboard and put it to the test with the first two (big) words on the Star-Lord shirt.

Several months later we’ve got a clear enough image of the rest of Peter Quill’s shirt that we can do our own continuation of the design translation. 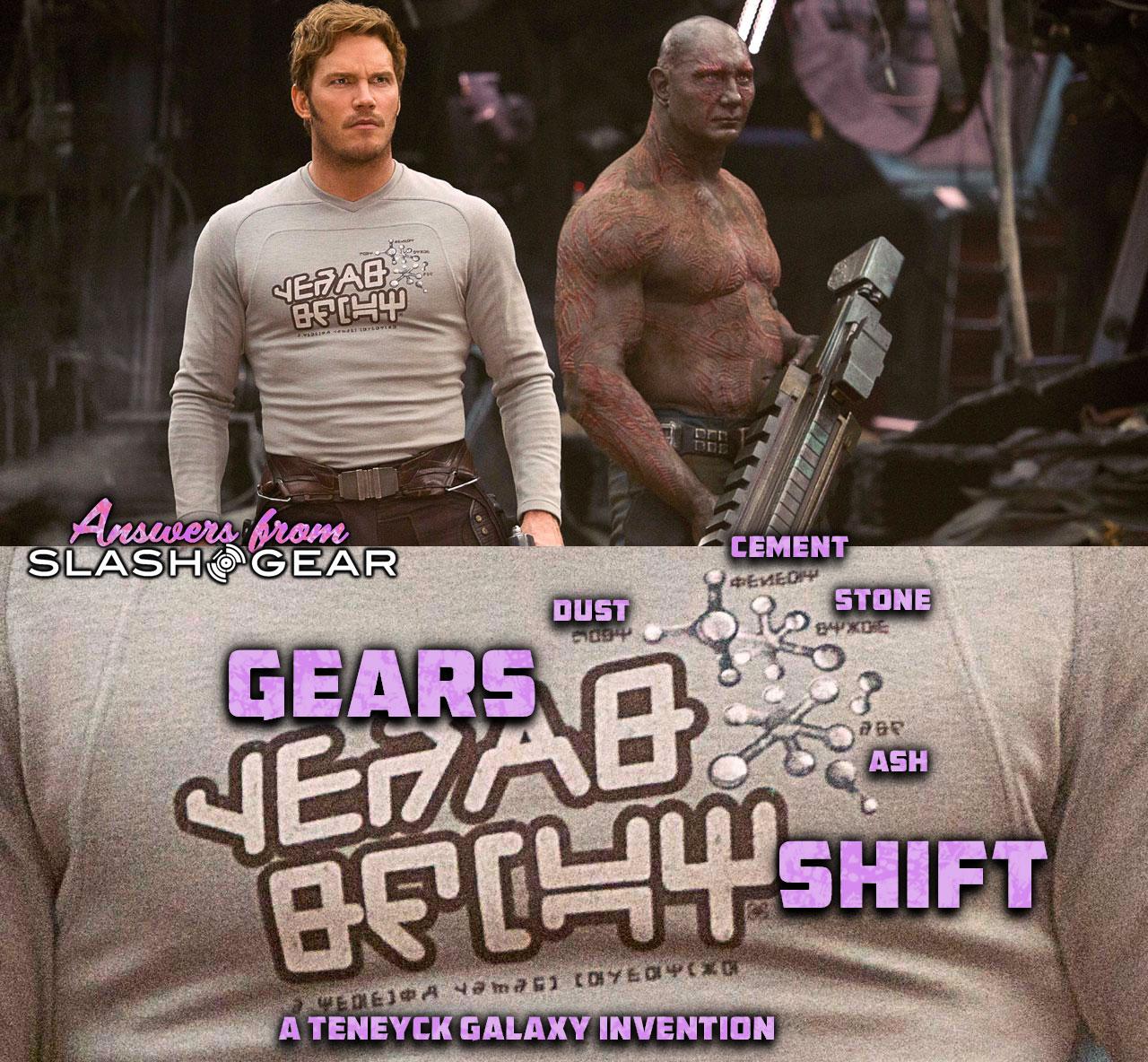 If the first words are GEARS and SHIFT, we can continue to assume that the keyboard above is in alphabetical order. Applying that code to the rest of this design, we find that the objects in the upper-right of the design show the following words:

Continuing that code making a now readable but still relatively nonsensical design, we can find out what the bottom of the shirt says. The words read as follows:

Looking in on the most unique word in this amalgamation of terms, we find that we’re meant to write it TenEyck. This is because graphic designer Karen TenEyck is a frequent collaborator with Marvel Studios projects. We found Karen TenEyck through the Art Directors Guild. 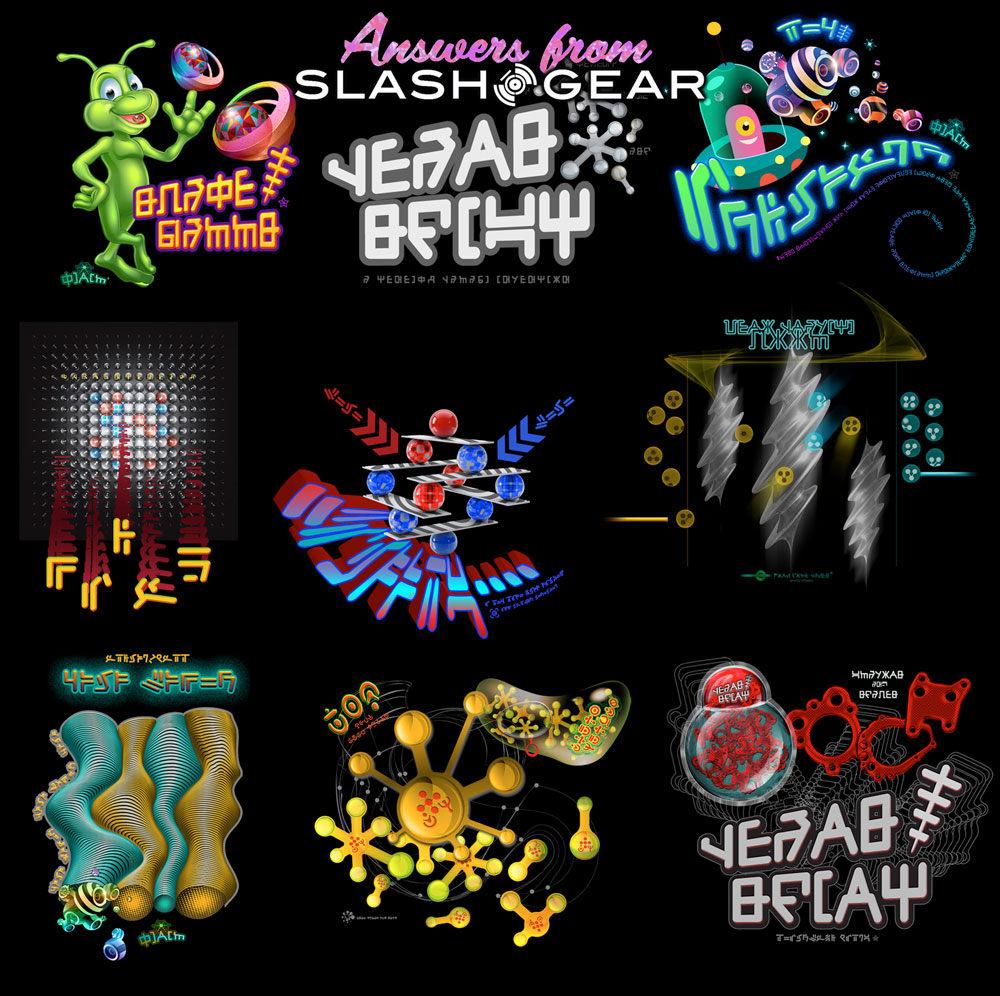 Karen TenEyck is a Graphic Designer for Guardians of the Galaxy Vol. 2 according to the Art Directors Guild. Her resume therein details her role as working in collaboration with Judianna Makovsky, costume designer.

We contacted TenEyck to ask her some questions about the design, but unfortunately she’s unable to comment on the movie until it’s already released. “I can’t discuss the film until it is released,” were her exact words. Until that time, we have a set of designs made by TenEyck for the movie.

Have a peek at a gem from 2012, while you’re in the movie investigation mood. Back then, we had a peek at the Barack Obama money in Total Recall. Just as it is here in Guardians of the Galaxy Vol 2, so too was that design placed there very much on purpose.

Guardians of the Galaxy Vol 2 is scheduled to be released inside the United States on May 5, 2017 at a theater near you.