Sometimes, only a button will do. The smart home and the rise of connected devices like lamps, speakers, locks, and more have brought complex automations within reach of a mainstream audience, but sometimes you don’t want to have to pull up an app – or talk to a smart speaker – just to switch on the lights. For those in the Apple HomeKit ecosystem, then, the Wemo Stage Scene Controller remote could be the answer.

About the size of a car key fob, the $49.99 Wemo Stage remote is a small, white plastic puck. On the front there are three buttons, distinguished by slightly raised dots. Each button supports a short press and a long press, which can be mapped differently, and there’s an LED hidden behind the frontplate to show when a signal has been sent. 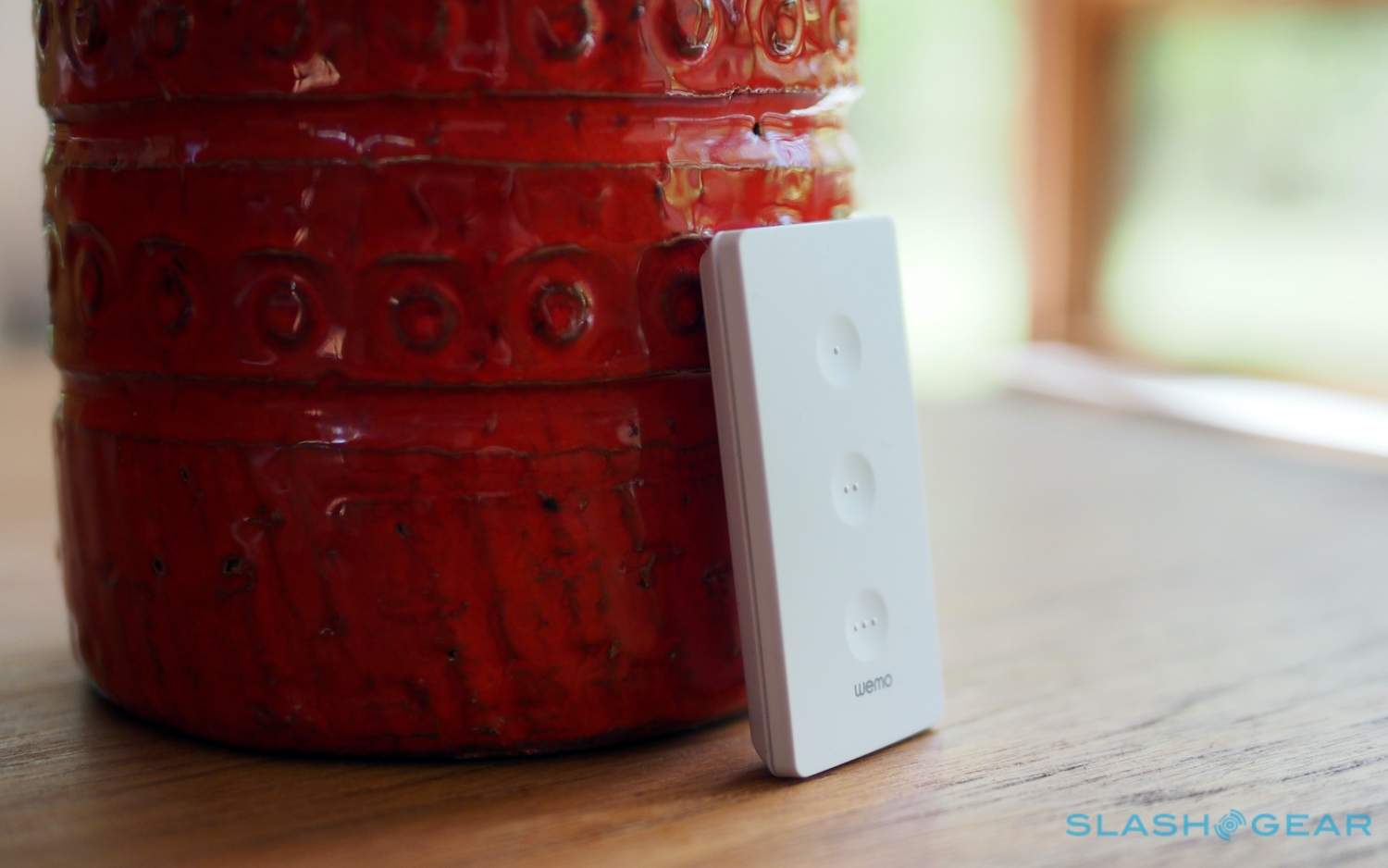 Pop the back cover off, and you’ll find a regular CR2032 battery. Wemo says that should last about two years, though I’ve noticed its percentage in the Apple Home app dropping more rapidly than would indicate that sort of longevity. At least the batteries themselves are readily available.

You can leave the remote on your coffee table or nightstand, but Wemo also includes a wall plate with 3M adhesive strips on the back. The remote clings to that magnetically. Or, you can pop out the magnetic dock section, and fit that into a junction box with a standard paddle-style switch trim plate.

I like the options, but I wish Wemo’s magnets were a little more tenacious. It’s all too easy to knock the Wemo Stage off the plate inadvertently if you stab at a button off-angle, or brush it off if you rub it with your sleeve as you walk past. 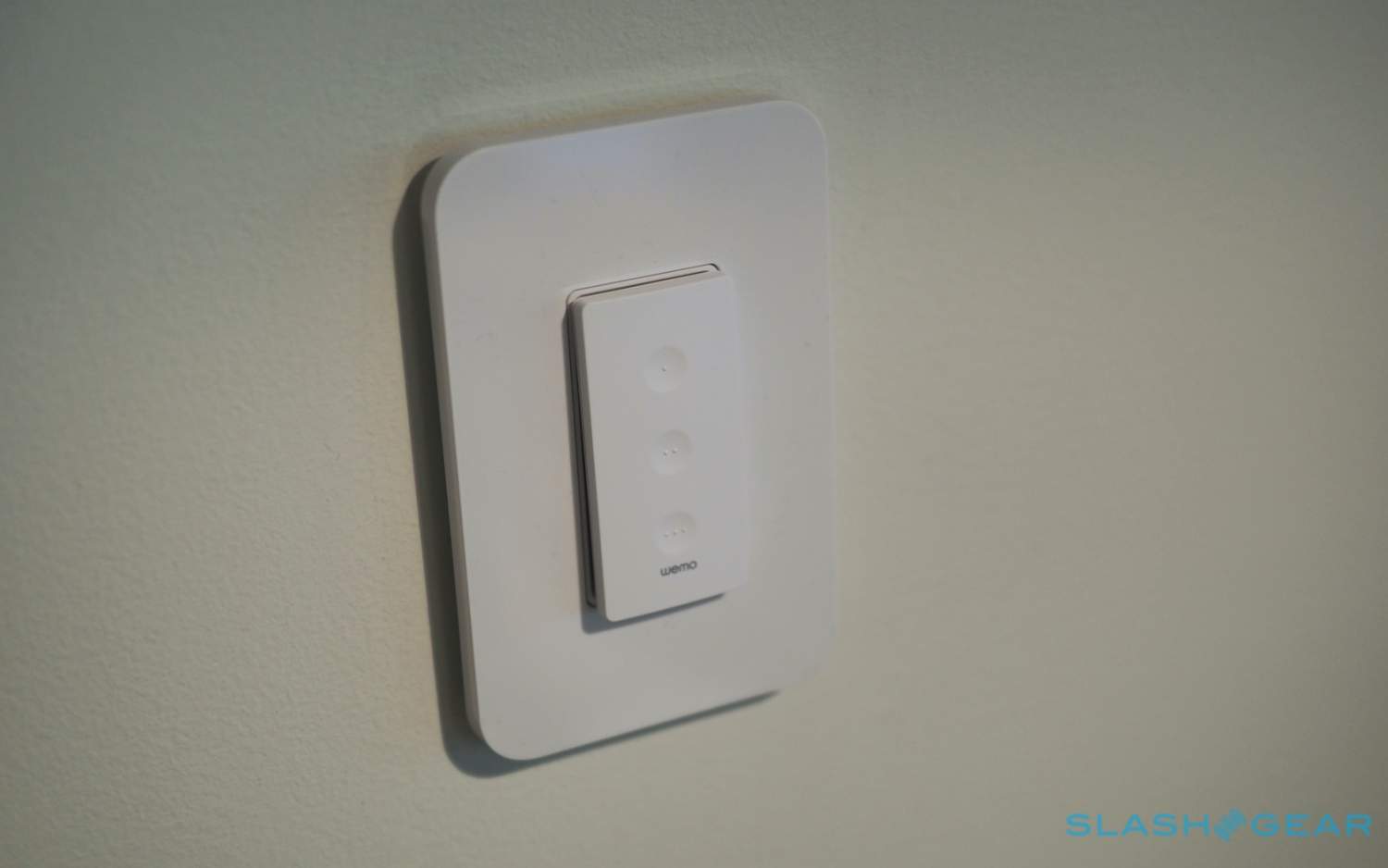 Setup is generally straightforward, mainly because Wemo hands the process over to Apple. The remote will only work with HomeKit devices, including more recent items from Wemo itself, and the broader ecosystem of HomeKit-compatible smart home products like locks and lights. Basically, if you can control it from within Apple’s Home app, the Wemo Stage should be able to control it too, but anything else is left out of the fun.

At its most simple, individual devices – like a lamp or lock – can be registered to one of the Wemo Stage’s buttons. It’s worth noting that, unlike with some remotes, there’s no toggle support here: if you set a short press of the first button to switch on your nightstand lamp, another short press won’t turn it off again. For that, you’ll need to program another button – or maybe a long-press of the same button – for the off command. 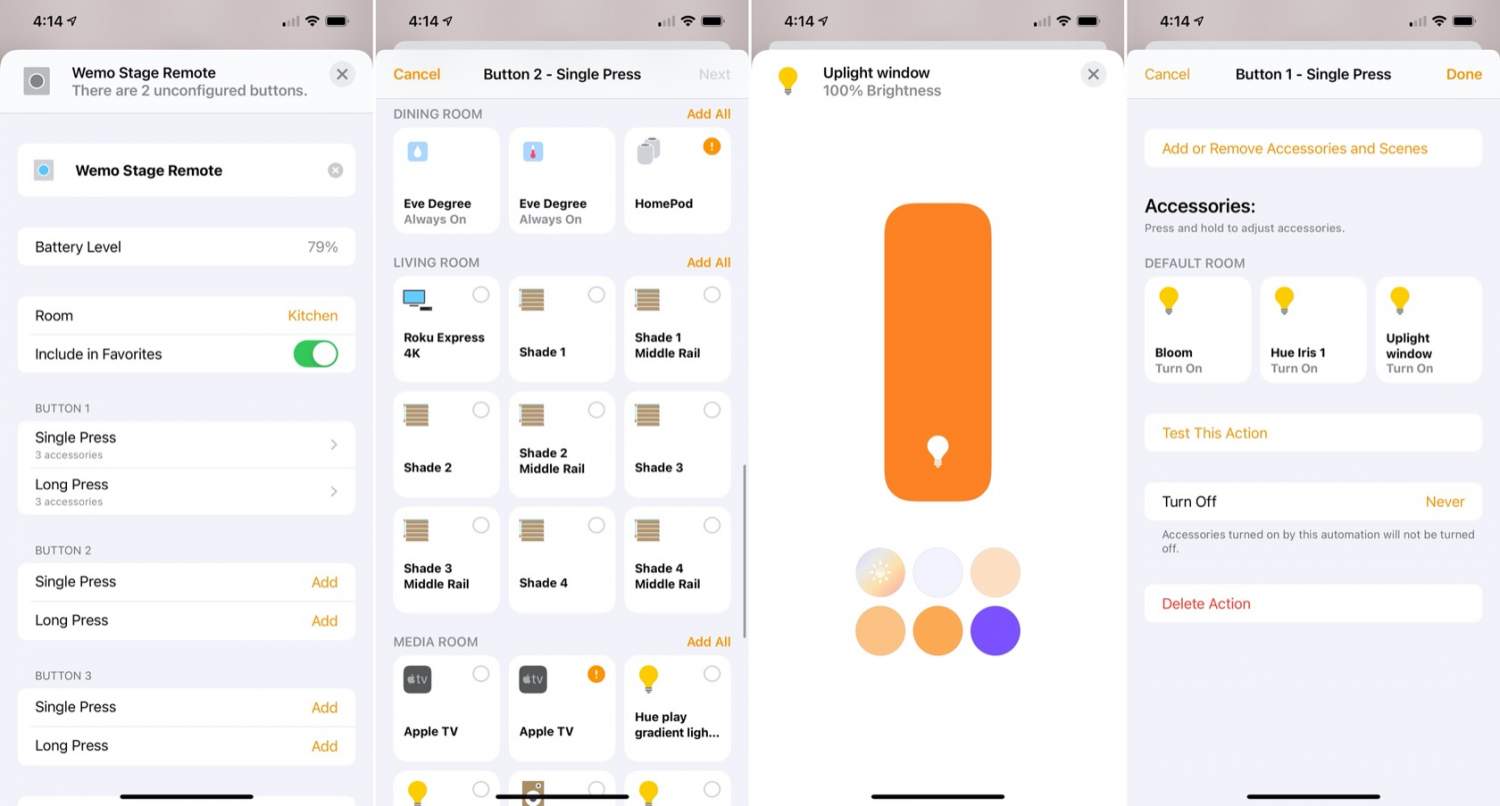 Where it gets more capable is when you start registering scenes to the remote’s keys. That could be a group of lamps in a room, or a mixture of bulbs, shades, and more. A single press could shut off the lights, lock the doors, and enable your HomeKit-compatible alarm system, for example, just before you go to bed. Or, it could dim the lights, close the shades, turn on your Apple TV and TV, and get you ready for movie night.

If you’ve already created scenes in the Home app you can assign those to the Wemo Stage straight away. Or, you can build a scene piecemeal as you program each button, first by selecting the appropriate devices and then by customizing the desired settings of each. For a light, for example, you could choose whether you want it to turn on or off, to what brightness level, and to a specific color if the bulb supports it.

It’s flexible, but it does mean that some of HomeKit’s frustrations are shared with the Wemo Stage remote. After picking a selection of lights, for instance, to map to a short-press on one button, it would’ve been convenient to copy that group but have them all switch off again for a long-press of the button. In the Home app, though, you have to select them all individually again. 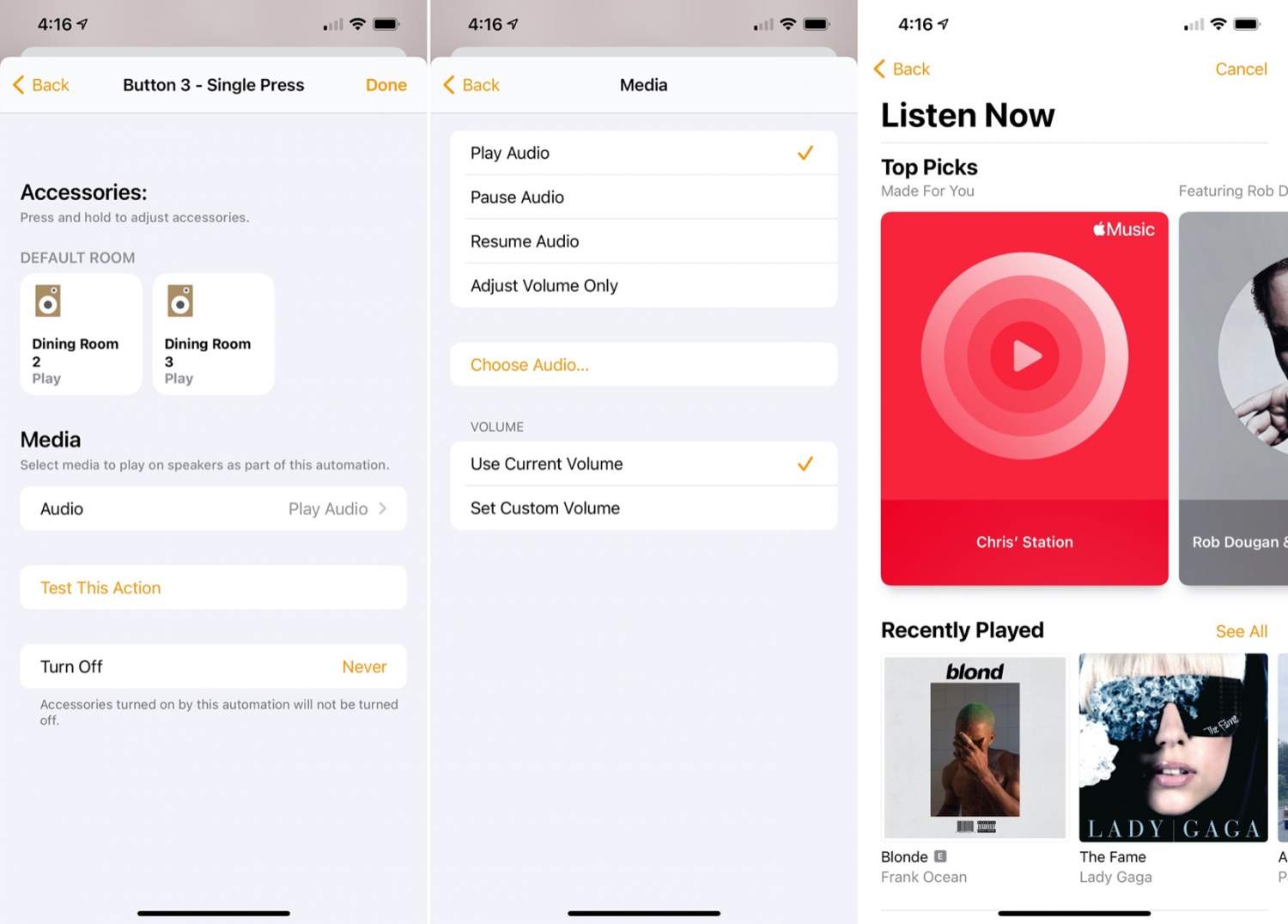 Different devices can also be finicky. Setting my HomeKit-compatible motorized shades to open or close fully from the remote was easy, but getting them to consistently open partway, or adjust the top rail on a top-down/bottom-up shade, was far less straightforward.

As for media integrations, there you bump up against Apple’s current limitations. While you may be able to set Spotify or other third-party music streaming services as the default with Siri on your iPhone now, for the moment HomeKit only supports Apple Music. That means, if you want the Wemo Stage to start up playback of a certain album or playlist, right now you’ll need to be streaming that through an Apple Music account.

My other big frustration was connectivity. Currently, Wemo Stage links to a HomeKit hub – like a HomePod mini or an Apple TV – via Bluetooth LE. There’s a Thread radio inside the remote, but it’s not enabled yet, and Wemo isn’t saying when that might actually happen. 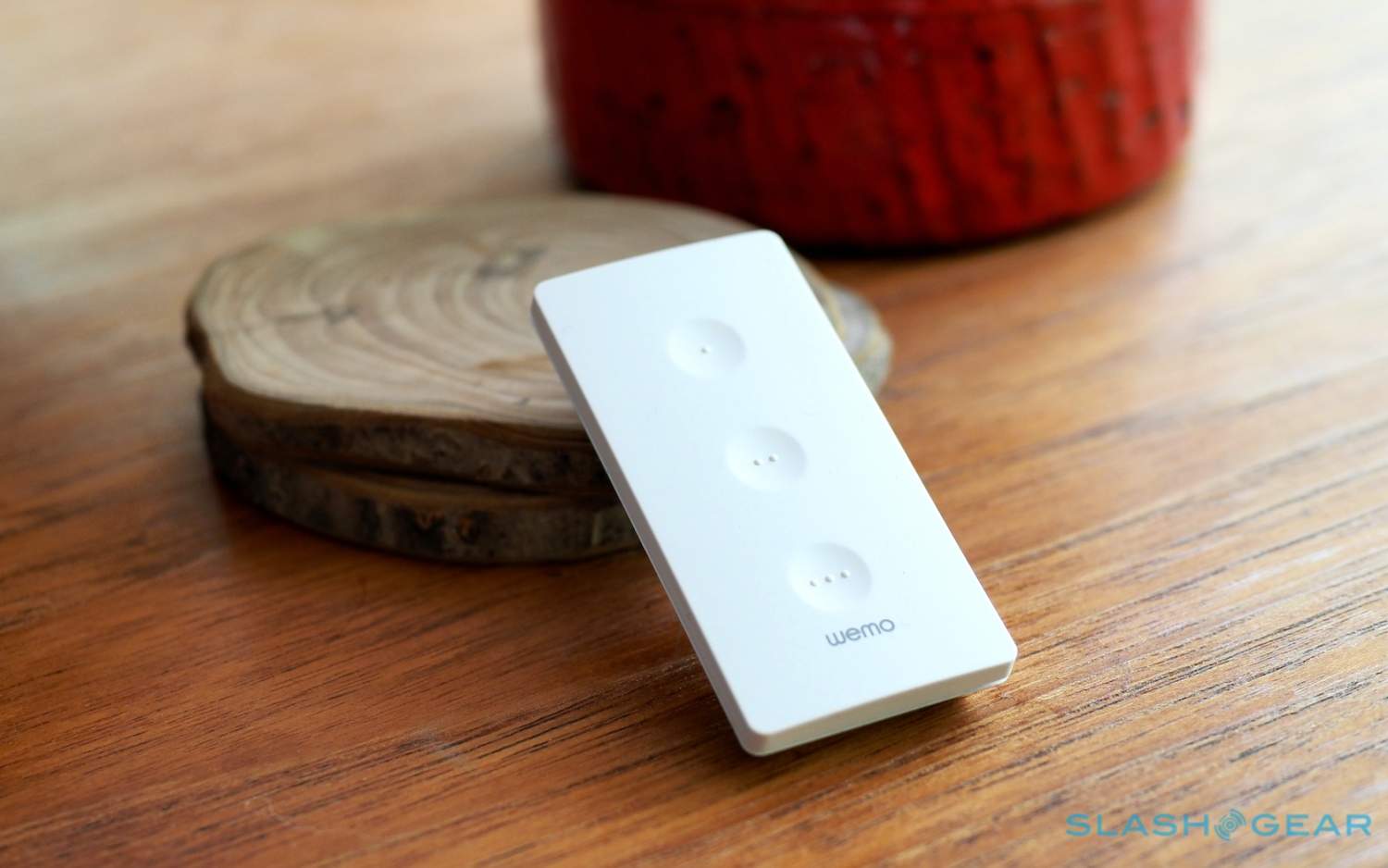 Come the arrival of Thread, I’d expect range to improve, but for the moment it can be on the short side. Get more than a few walls between your remote and the nearest hub, and the connection can become flaky.

Indeed, there have been more than a few times where pressing a button on the Wemo Stage either didn’t trigger the programmed scene, or only partially triggered it (with some lights remaining off, for instance, while others switched on). There’s also a brief moment after you press a button where a second press isn’t recognized. Adding to the confusion, the remote’s LED glows when you press the button but that doesn’t necessarily mean your scene has actually been triggered.

My gut feeling is that Thread will help address all that. Still, with no public roadmap for its activation, it’s hard to take too much reassurance from that potential.

I like the core idea of a smart home remote. Pressing a button is undeniably easier than pulling out your phone, unlocking it, opening an app, and changing a setting, when all you want to do is turn on a light. That’s before you get to less tech-savvy spouses, or visitors who don’t want to have to sit through your IoT lecture just to figure out how to close the shades. 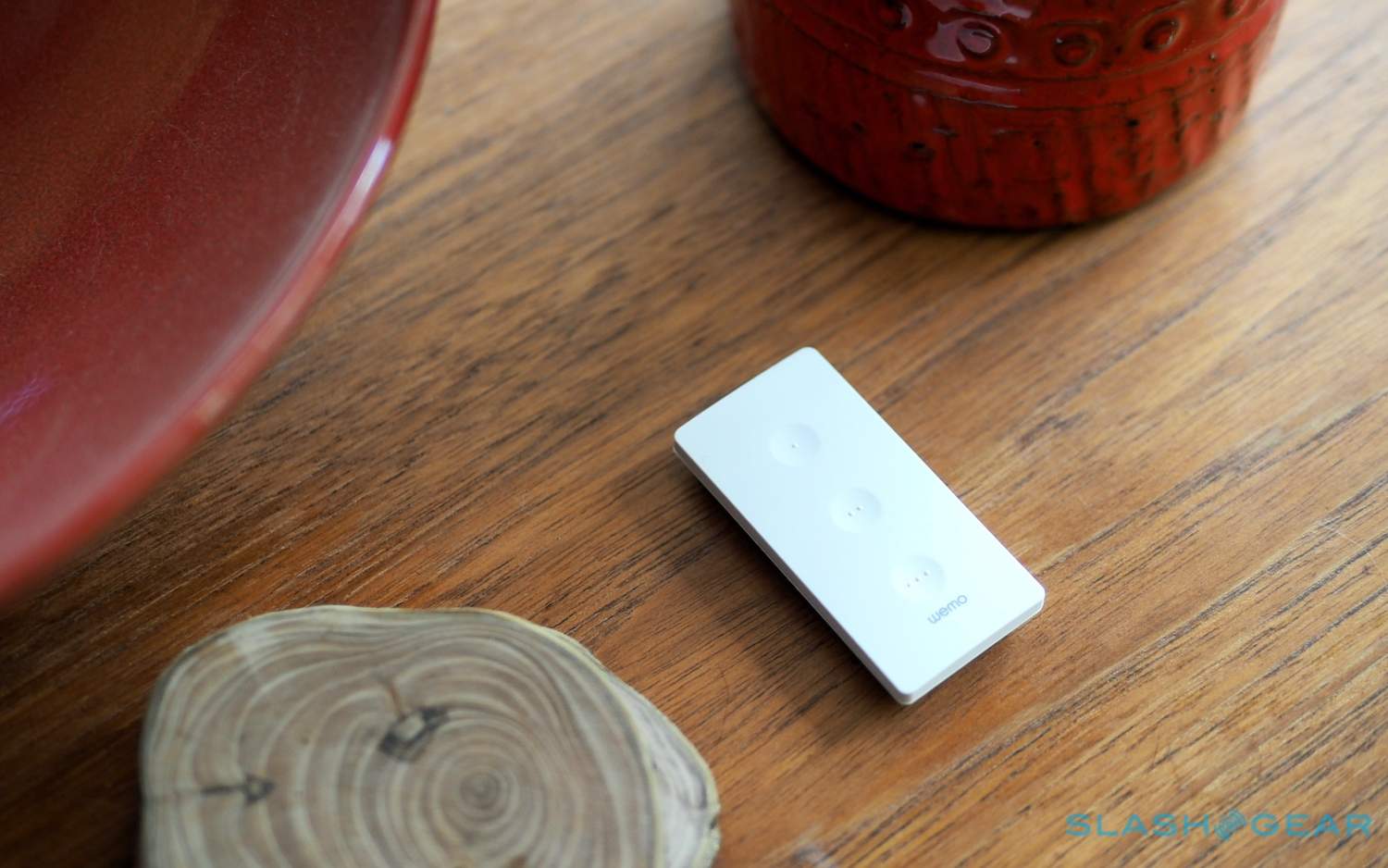 In many ways, then, the Wemo Stage Scene Controller fits the bill. Flexible enough to handle up to six scenes, yet hardly intimidating, its user-friendliness is a factor of HomeKit’s user-friendliness. That also works as a limit, of course, since HomeKit-compatible devices are still in the minority, but Apple’s focus on privacy and security is a welcome one in the category and we’re finally seeing the platform gain more traction.

Nonetheless, at $49.99, the Wemo Stage isn’t exactly cheap if you want to equip a few rooms with remotes. Bluetooth range and consistency issues are also worth bearing in mind, and though Thread support may address them both, for now that’s a wait-and-see thing. In short, there’s plenty of potential here, but teething pains cast a shadow over Wemo’s first attempt at filling one of HomeKit’s most notable absences.