For several years now, I’ve been a fan of incremental and idle games. My fondness for this genre has a very clear starting point, and it’s one I’m sure I share with many people: Cookie Clicker. I played Cookie Clicker a lot shortly after it was first released as a browser game in 2013, and though I played it for quite some time, I eventually fell out of it. Earlier this week, Cookie Clicker launched on Steam, and like a moth to a flame, I’ve returned for this new release.

Anyone who has played Cookie Clicker before will likely not be surprised by the fact that I’m addicted to it again. It’s hard to avoid getting hooked on Cookie Clicker, as the game grabs you from the opening seconds and doesn’t really let go. The only difference between now and when I played it the first time around is that, second time around, I at least know what I’m getting myself into.

For the uninitiated, Cookie Clicker is an idle game where the goal is to make cookies – initially by clicking on the giant cookie on the left side of the screen – and then spending those on ways to make more cookies. At its core, it’s a game about seeing how big you can get certain numbers, and as it turns out, that’s a lot of fun. I guess we have our monkey brains to thank for the fact that we’re so easily entertained.

Still, it’s hard to deny the appeal of Cookie Clicker. What starts as just wanting to see the number of cookies you’re producing each second grow larger and larger eventually becomes a strange, surreal cookie-making journey. I won’t spoil the twists and turns Cookie Clicker takes for those who haven’t played it before, but let’s just say that it’s not as simplistic as it might seem on the surface. There’s more to this game than just constructing new buildings and seeing how high you can pump up your cookies-per-second. 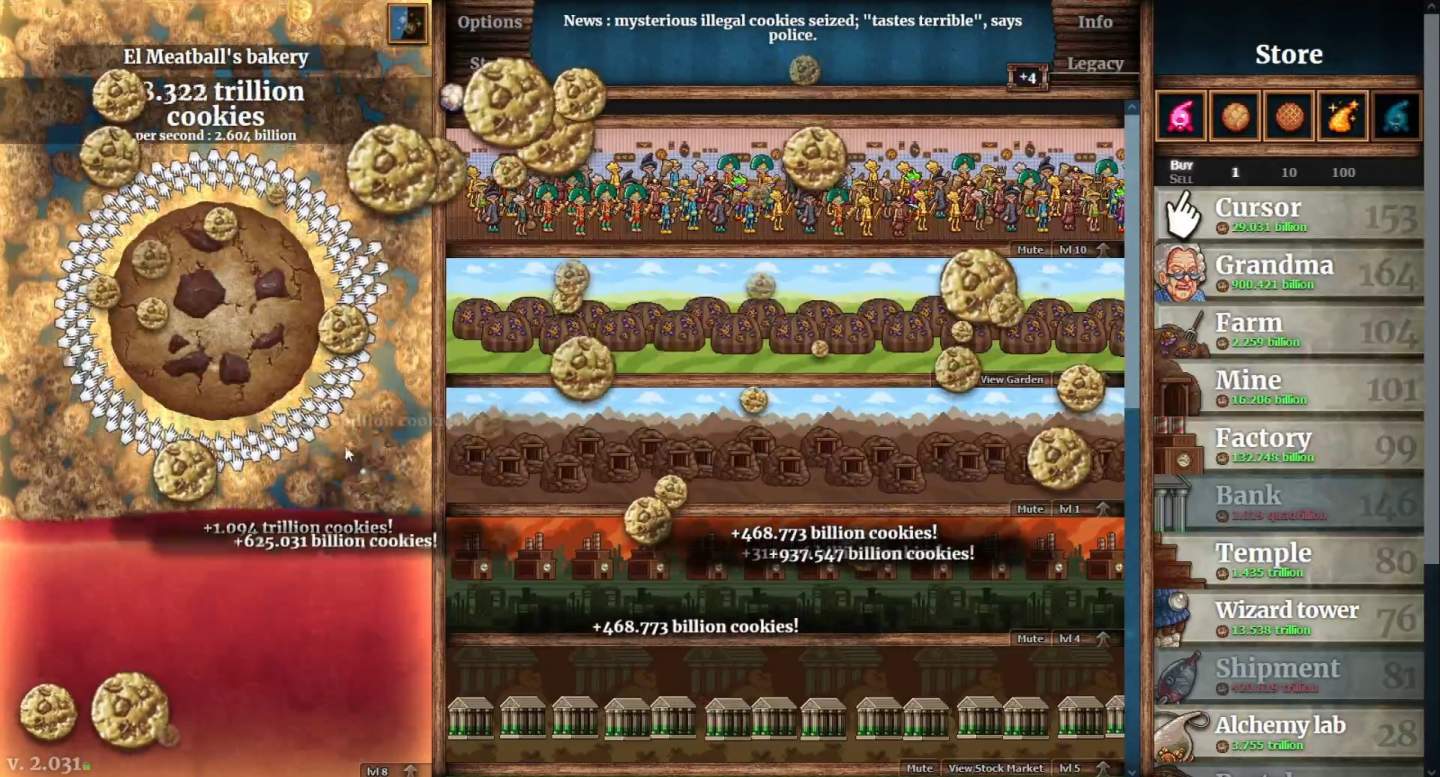 Between recruiting grandmas for your cookie baking army, working the cookie mines, or building wizard towers where cookies are summoned using magic, Cookie Clicker definitely has its charm. However, as the name of Cookie Clicker’s genre suggests, this is supposed to be a slow-burn game that you progress through incrementally. That means you’re not going to unlock everything the game has to offer in a matter of hours, days, or even weeks – Cookie Clicker was made to be played off and on for extended periods of time.

I don’t remember when I last played the browser version of the game, but I know that it was more than five years ago. In the time since then, Cookie Clicker has received a large number of updates that seem to have vastly expanded the amount of content on offer. While I don’t really know what I’m in for in regards to that new content since I made an effort to avoid reading the patch notes from the past several years, I know enough about Cookie Clicker to know that it’s going to be worth seeing. That fact alone has me excited to really dig into the game again now that it’s on Steam.

The Steam version also comes with a great soundtrack composed by C418, perhaps best known for his work on Minecraft’s soundtrack. The music C418 has created for Cookie Clicker is fantastic and, at the start at least, is very chill and optimistic. I look forward to seeing how the soundtrack changes as I get deeper into the game and Cookie Clicker gets ever-weirder. 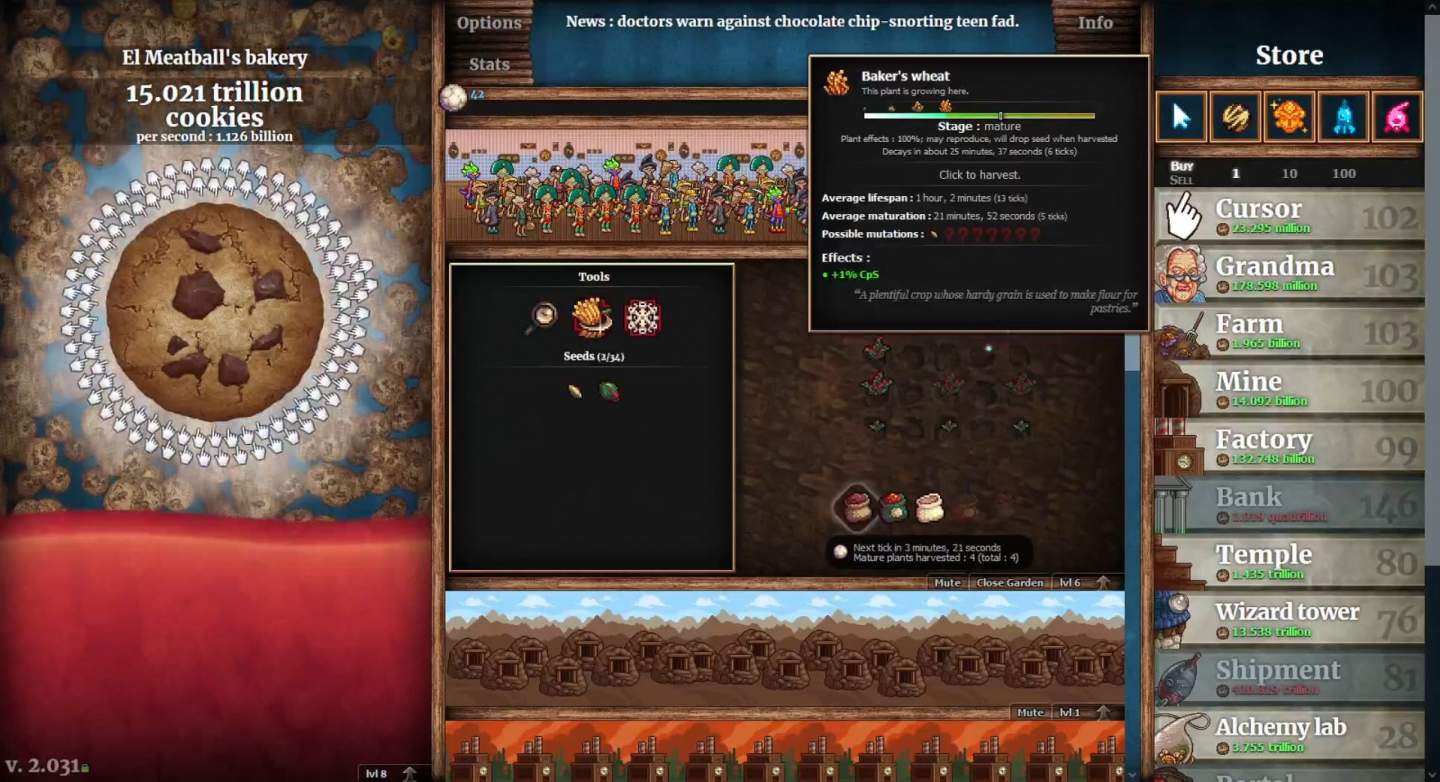 Beyond the new soundtrack, this is more or less the Cookie Clicker that’s available for free online. To some, it might be weird that Cookie Clicker on Steam runs $5, but considering how much content was in the game years ago and extrapolating to the present day, that certainly feels worth the $5 outlay to me. Of course, there’s a more masochistic part of me that wants my total playtime logged in Steam just so I can see how long I’ve spent building my cookie empire, though I can see why someone would not want that as well.

The Steam version does have its benefits, too. For instance, Cookie Clicker leverages Steam cloud saves, so you no longer have to worry about nuking your save because you cleared your browser’s cache or (somewhat ironically) cookies. Eventually, the Steam version will have Steam Workshop support as well, which means that players will be able to install mods with some degree of ease. I can remember installing mods for the browser version, so having Workshop support baked in will probably prove useful at some point down the road.

But even without a ton of new features for the Steam launch, this is Cookie Clicker. It’s a known quantity at this point, and it’s either a nostalgic trip down memory lane for those who have played Cookie Clicker before, or it’s a prime example of the incremental genre for those who haven’t. I’m looking forward to exploring the new content I’ve yet to experience over the coming weeks, but more importantly, my primitive brain is just excited to see some really, really big numbers.