It’s not easy to give birth to a brand new global racing series. It’s even harder when you’re bucking the trend of nearly 100 years of motorsports by leaving the roar of internal combustion behind in favor of embracing the future of electric mobility. Formula E, now in its second season, juxtaposes the familiar open-wheel format with avant-guard battery-powered drivetrains, and in the process flips much of the established racing order on its ear.

I’d never been to a Formula E event before the Long Beach ePrix, which for 2016 stands as the only American date on the series’ 10-race calendar. In fact, the closest I’d ever come to electric racing was an ill-advised foray down the fairway of my local golf course as a teenager behind the wheel of a golf cart that may or may not have belonged to me. Still, I’ve spent much of my life on or around race tracks, and have had the chance to stand circuit-side for every major championship touching down on the continent. 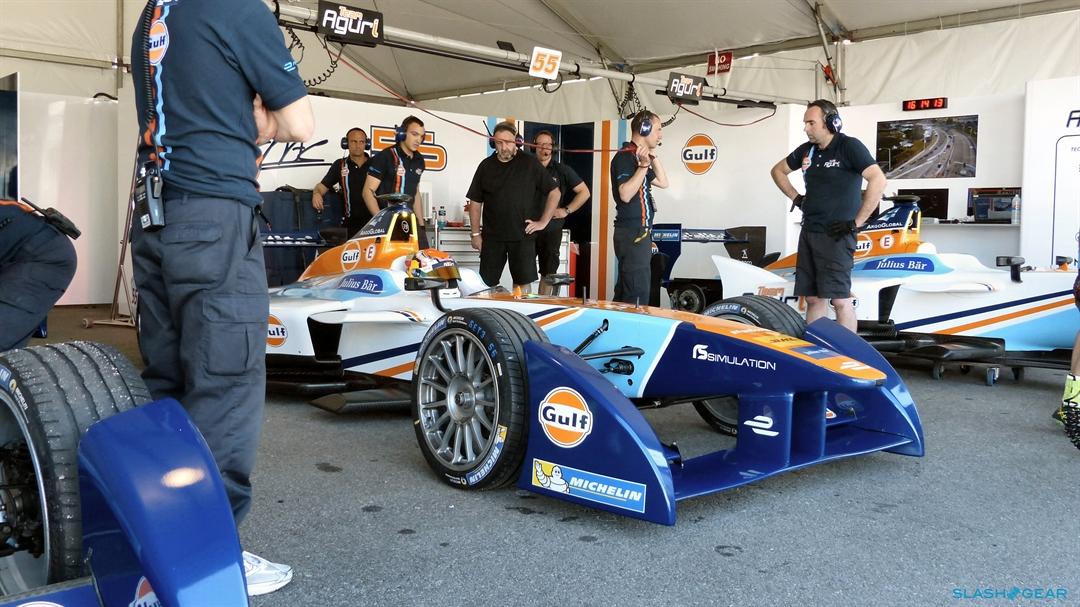 In some ways, this places me outside the standard profile of a Formula E fan. Geale Whyte, head of brand engagement for the Amlin Andretti team, had told me just before the event that most of the people interested in the series were brand new to the world of wheeled competition, rather than lured away from other forms of racing. Looking around the Long Beach concourse, it was easy to confirm Whyte’s analysis: this was not the NASCAR / F1 / IndyCar faithful milling about, but rather a surprising number of families with young children and individuals wearing polo shirts just as likely to advertise an engineering firm as an auto brand.

In fact, whereas some might see the lack of sturm und audio drang on the track as a deficit, for the new breed of race fans flocking to Formula E it’s a big part of why they come. As a parent, not having to worry that your brood will suffer from permanent hearing damage because they got a bit too close to the catch-fence is a revelation – and so is being able to have a conversation at normal volume while walking around the paddock, or watching lap after lap of on-track action. 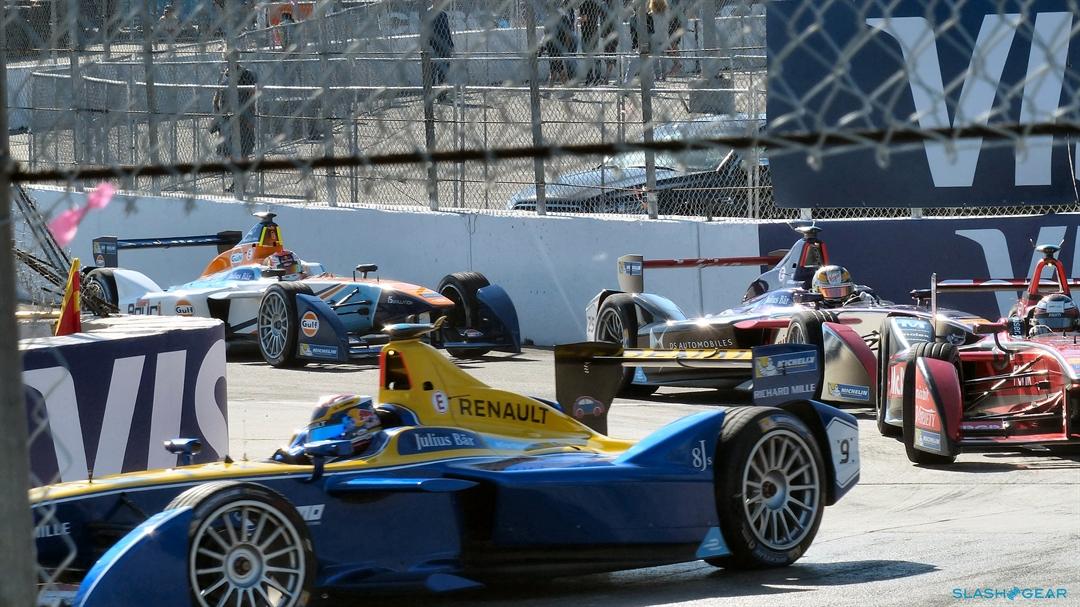 In fact, the silence of the paddock – broken only by the occasional high-pitched whirring of air tools and the clank of jacks – was a revelation. Wandering from one garage canopy to another on Friday I could hear the crew members talking to each other, drivers going over strategy, and other fans discussing the race scheduled to be held the following afternoon. 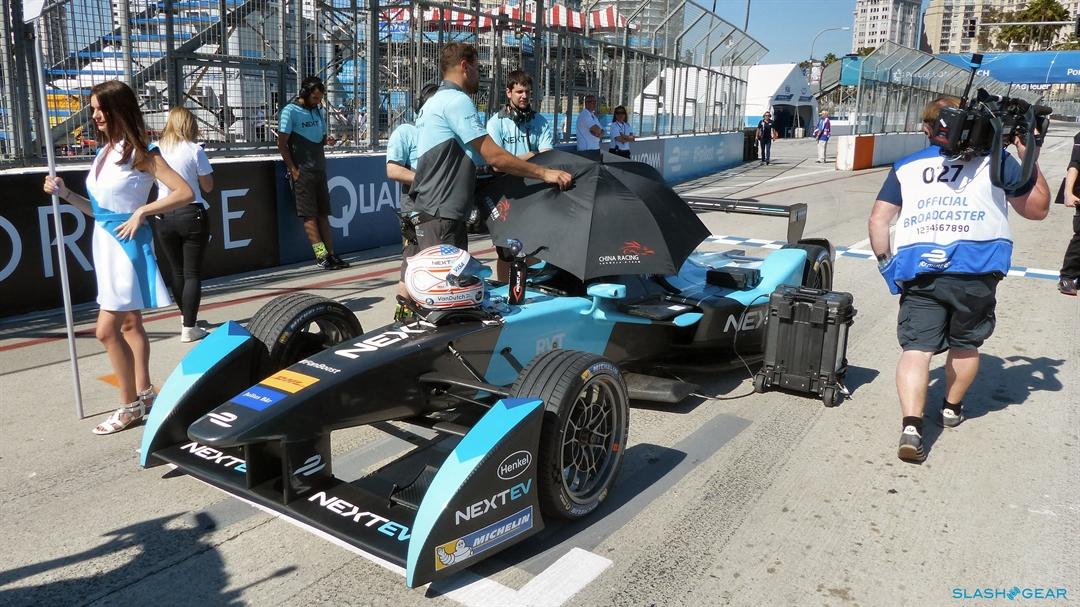 Don’t think that the lack of sonic turbulence is any indication that the cars driven in Formula E aren’t serious performance machines. The electric power plants used by FE produce 270 horsepower, which when combined with a curb weight of just under 2,000 lbs and the series’ aero package allows for a terminal velocity of 140-mph. While top-end speed for Formula E cars might be somewhat lower than several of their gas-burning compatriots, the decision to stick almost exclusively with tight street circuits such as the one in Long Beach largely bridges the excitement gap, as acceleration and handling become more valuable than pure brawn (60-mph arrives in a scant three seconds for these vehicles). 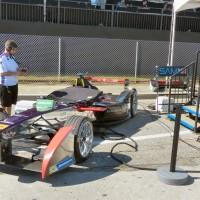 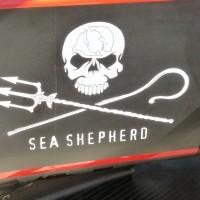 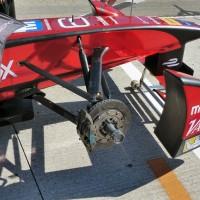 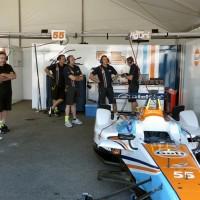 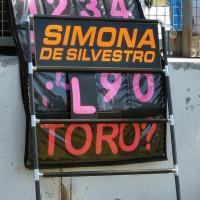 Although in the first season all teams had to use exactly the same hardware and software for managing the output of the electric drivetrains provided by Spark Racing Technology (which also built each vehicle chassis), this year there’s more leeway for each outfit’s engineer to play around with the overall setup. In partnership with tech sponsors like TE Connectivity, Schaeffler and Qualcomm (which in addition to helping underwrite the series also has a hand in the wireless charging systems used by the BMW-provided safety cars), teams can chose to use multiple motors, any number of transmission gears from one to five, and custom power delivery software. The cars are also much more audible than they once were, with a distinctive electric whine unique to each team. 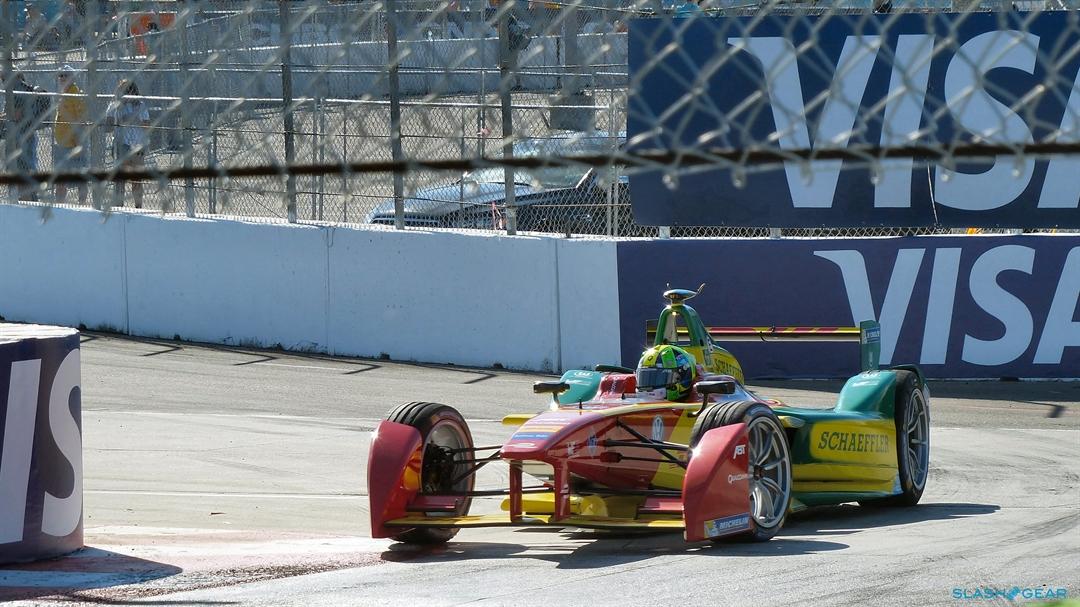 There are some aspects of Formula E’s weekend format that do take some getting used to for those accustomed to more traditional forms of racing. First, there’s an elaborate qualifying process that leads up to the Super Pole, where the top five fastest drivers battle it out to start in the front position, followed by a simulator race where everyone takes to a virtual version of the Long Beach circuit. Then there’s the on-grid burn-out to start the event – a crowd pleaser, for sure – followed by the fact that each team must pit once to swap cars. 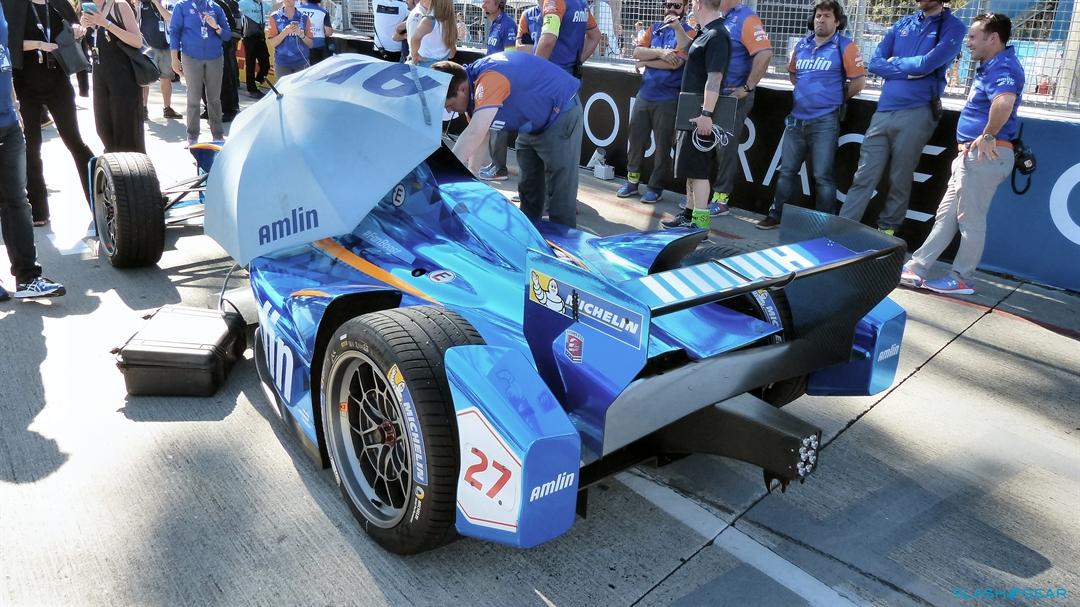 Yes, that’s right: FE teams hit the reset button halfway through the race because the 200 kW battery in each car isn’t capacious enough to last the entire event. The battery in question is designed by Williams Advanced Engineering, and it has a ceiling of 28kWh of energy. Teams with enough fan support can leapfrog to the front of the power pack by way of ‘Fanboost,’ which is another novel aspect of Formula E. Fanboost makes it possible to vote for your favorite driver to gain up to 20kW of additional energy in their battery (awarded to the top three vote-getters) via Twitter or the series’ own web page. 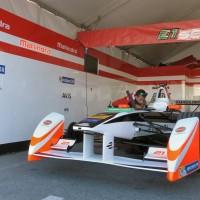 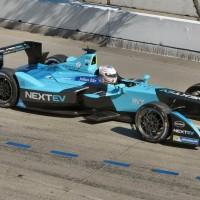 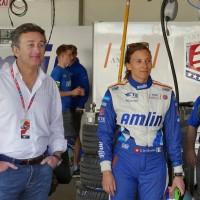 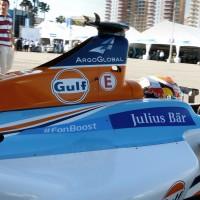 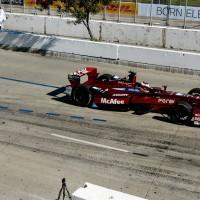 On-track action is predictably tight. After watching practice and qualifying from the series of corners at the end of the fastest straight, I shifted to the hairpin just in front of pit-in to enjoy the race itself. Jockeying for position is fierce around this tightest turn on the course, and many a battle was fought and lost right in front of my eyes. It was a fun afternoon – this is real racing, despite the lack of out-and-out speed – but it’s clear that Formula E is also a series that’s still working out all the kinks. 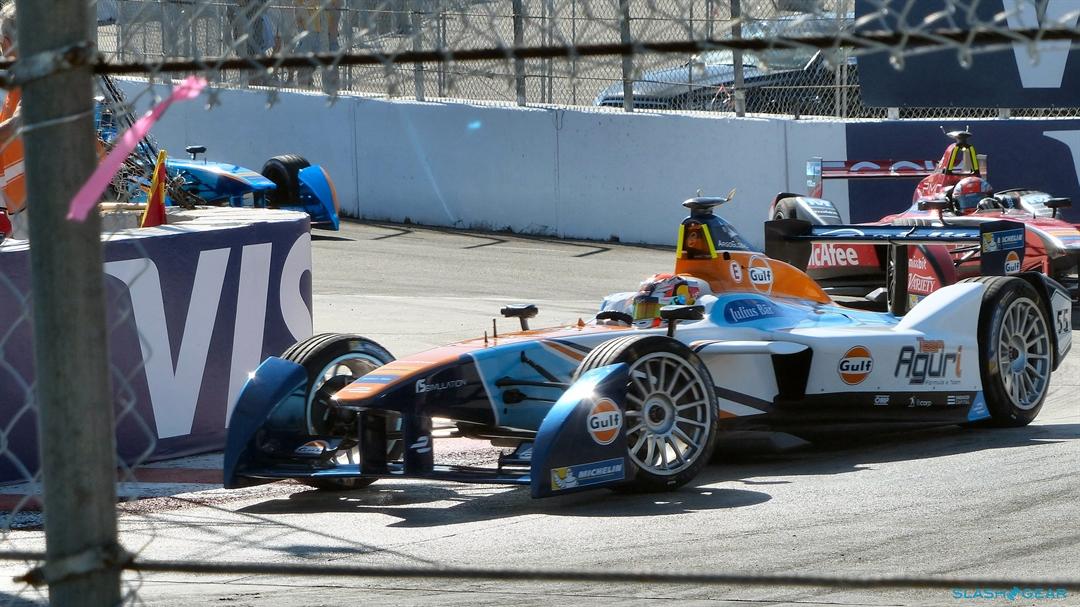 Small numbers on each car made it difficult for a newbie like me to keep track of individual drivers, while a scoreboard and PA failure with 8 laps to go had everyone in the grandstands guessing as to who won the race – especially since a caution bunched everyone up for the final few go-rounds. The short nature of the event was also unusual for racing, as the Long Beach ePrix was over after a mere 41 laps. After waiting an entire day for the big show (the race started at four in the afternoon), I was left wanting more.

Ultimately, I suppose that hankering is a good thing. The technology used by the ePrix racers is only going to keep improving as time goes on, and this FIA-sanctioned series is in it for the long haul. As batteries get better, cars get lighter, and range improves, longer events would seem to be a natural evolution.

For now, however, the format seems to be working. Formula E spokespeople have stated that the fresh crop of fans it has been drawing are more intrigued by the innovative technology that underpins the entire series than they are by the promise of speed at any cost. Judging by the engagement of the crowd at Long Beach, it certainly feels like Formula E is building a firm foundation for the future. 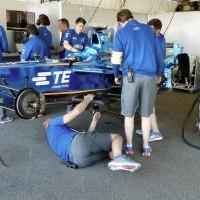 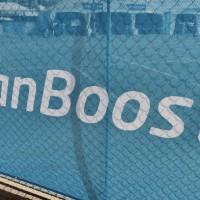 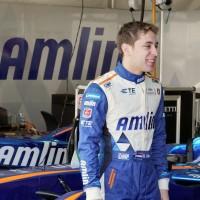 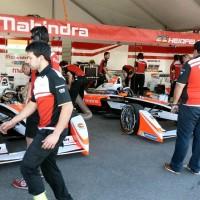 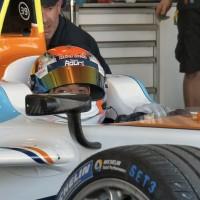 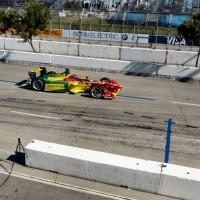 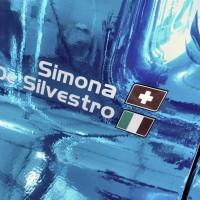 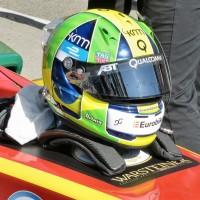 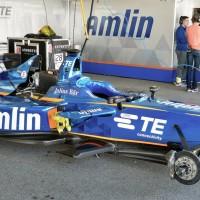 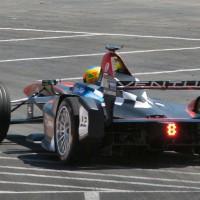 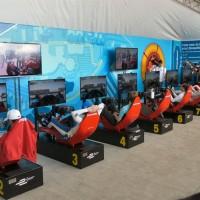 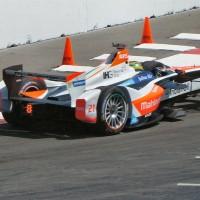 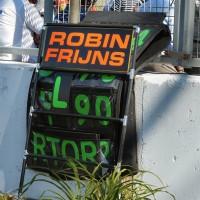 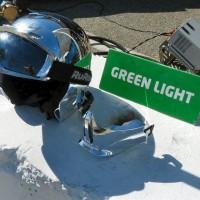