We can now watch Pluto rotate in space

As New Horizons begins its final approach toward Pluto, NASA presents a Google Earth-mapped surface of the spinning space body. The final approach toward the planet has begun – this NASA-led mission will get within a few thousand miles of Pluto on the 14th of this month. Today we get our first spherical map of the planet as placed with Google Earth onto our own planet. Strange as that may sound, it provides as accurate a visual for the planet as we’ve ever seen. You’ve seen the flat images before – now watch Pluto spin in space.

Straight from the Johns Hopkins Applied Physics Laboratory we have this Google Earth overlay of New Horizon’s latest map images of Pluto. This map is accurate to July 7th. For those of you that wish to map this planet on your own computer, head to the Johns Hopkins link above and make sure you’ve got the latest version of Google Earth up and running.

As this image is mapped to the Google Earth spherical version of the Earth, it is most certainly not to be taken as a completely “correct” Pluto. Pluto is much smaller than the scale you’re seeing here and it is not entirely spherical. This map is not suitable for quantitative analysis, that is to say.

It’s not perfect, but it’s the best we’ve got so far. 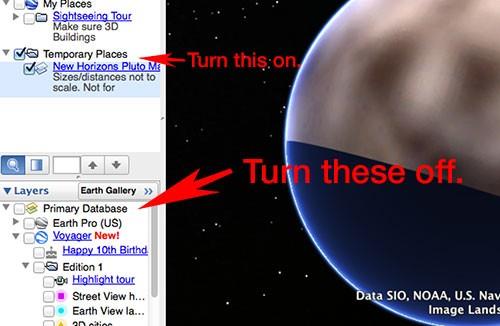 If you do plan on loading this map to Google Earth yourself, you’ll want to switch off all mapping overlays except for this newest Pluto option.

Stay tuned to our NASA tag portal for ever-closer images as we approach over the next week!