Western Digital has outed its latest drive, the WD Black2, pairing a sizable chunk of solid-state storage with a more capacious traditional HDD for the best of both worlds. The 2.5-inch drive has 120GB of SSD capacity and 1TB of HDD space, and gives the option of greater control over which data is stored where, unlike existing caching drives or, indeed, Apple’s proprietary Fusion Drive system.

The company calls that Shift_Technology, and it means users can choose whether their data is saved to HDD, or SSD, or even both. One possible setup is that the system OS and some of the key program files could be saved to SSD, for faster boot and load times, while less frequently accessed software and content is left on the slower, but larger, HDD.

Alternatively, the SSD could be reserved for just the very latest content the user is working on, making for faster video editing or 3D design work. WD’s software also promises to prolong the lifespan of the SSD’s NAND flash, by migrating bigger data files to the HDD. 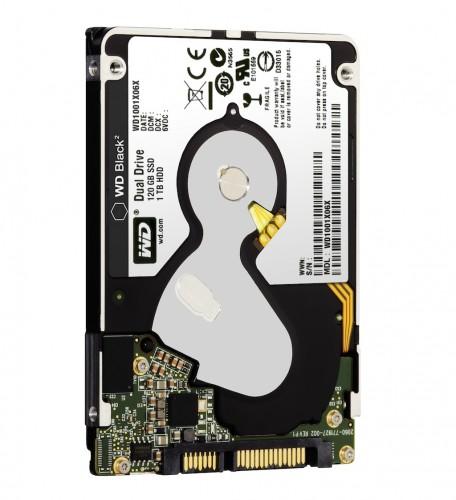 It’s obviously not the first hybridization system for affordable speed and capacity that we’ve seen. The earlier hybrid HDDs used a relatively small chunk of flash storage – usually 32GB or less – paired with a regular drive, and effectively cached the most commonly used data on that small subsection.

Apple’s Fusion Drive, meanwhile, offered on the past two generations of iMac, uses a full-sized HDD and a relatively large SSD with OS X acting as manager and choosing dynamically where data is kept for best everyday performance.

Western Digital isn’t making performance claims for the SATA 6 Gb/s drive at this stage, so we’ll have to see how it holds up in reviews. There shouldn’t be long to wait, though, with the WD Black2 on sale priced at $299.