It is with great personal pleasure that I introduce you to the salmon cannon. Before you fly off the handle, know this: this fish-firing masterpiece does not exist to destroy salmon, but to help them survive. These fish are actually getting fired from a cannon in order to help their species live longer.

The disruption of natural water flow is a problem. Not for everyone, necessarily, but for salmon for certain. That’s why the folks at Wooshh Innovations have created a cannon to help these creatures get where they need to go with relative ease – safely, too. 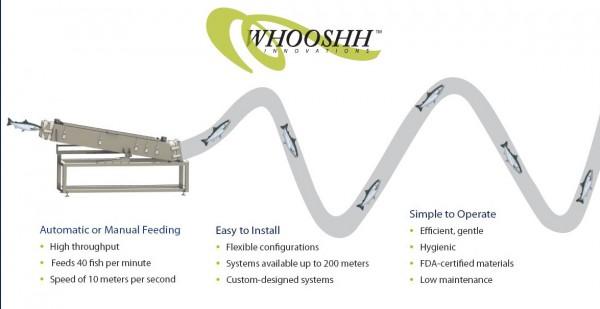 The cannon you’re seeing here was originally created to transport fruit from one place to another through tubes, these tubes have been converted for salmon specifically.

1. Fish goes in one end.
2. Soft fabric tube “seals” around fish.
3. Vacuum created, propelling fish.
4. Fish moves at speed between 5-10 meters per second (11-22mph)
5. Out of the water for mere moments, the fish is fired from the cannon to land safely in the water beyond.

This system has been tested in Washington state at Kalama Falls, Columbia River Gorge and Roza Dam.

First you’re going to see this magnificent invention working at the Columbia River Gorge. This is a 100-foot demonstration. The actual demo doesn’t begin until 3-minutes in. Watch that fellow down on the trailer closely – he’ll load in the fish.

Next you’ll see a demonstration video meant to be shown at conventions. Watch for frozen fishes being sent out and woken up along the way.

Another handling video coming your way next. This one doesn’t necessarily have to do with migration so much as interior transport.