Dramatic footage of the collapse of the Arecibo Observatory telescope has been released, showing the final moments of the historic scientific instrument. The telescope – a vast, 1,000 foot wide dish with a suspended receiver and radar transmitters slung above it – collapsed in the early hours of December 1, 2020, having experienced damage back in August 2020.

It was a disappointing end to what had become as much a media star as a tool for astronomic research. The telescope, built into a natural sinkhole in Arecibo, Puerto Rico, featured in movies like 1995’s James Bond film “Goldeneye” where it was used for a fiery finale.

The actual demise, however, involved no flames but plenty of dust. Concerns mounted after an August 2020 incident, where an auxiliary cable supporting the telescope’s metal frame snapped. In the process it landed on the dish underneath, leaving a sizable hole. 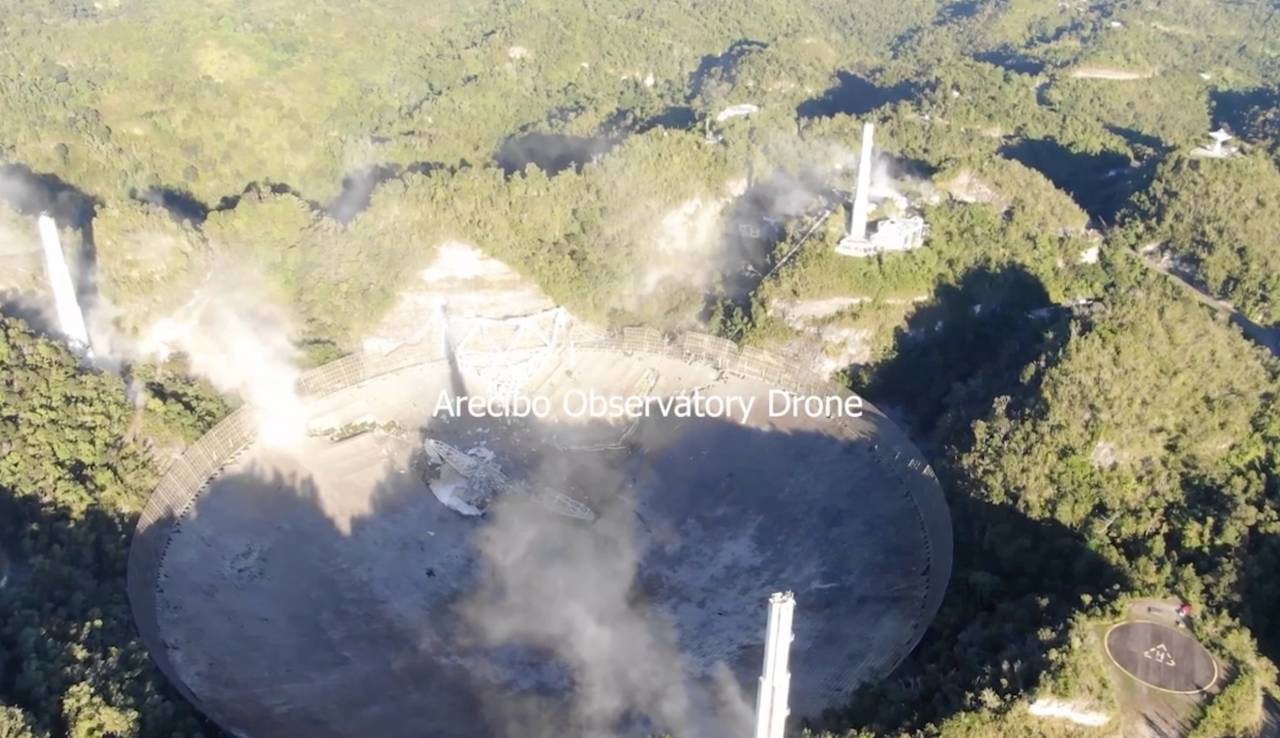 Engineers working with the National Science Foundation were concerned that it could be a sign of further collapse, and with good reason. A further cable break in November put the telescope out of commission, with further damage the same month leading to a disappointing conclusion for the project. Engineering firm Thorton Tomasetti assessed Arecibo, and deemed it too unstable to repair.

Instead, it would be dismantled to avoid further damage or injury, it was announced. At the start of December, though, the telescope got a head-start on that process.

The top section of all three of the telescope’s support towers broke away, the US National Science Foundation confirmed. That caused the 900 ton instrument platform to fall, in the process dropping the support cables. No injuries were recorded, but the learning center at the observatory sustained significant damage along with the dish.

“When engineers advised NSF that the structure was unstable and presented a danger to work teams and Arecibo staff, we took their warnings seriously and continued to emphasize the importance of safety for everyone involved,” NSF Director Sethuraman Panchanathan said earlier this month. “Our focus is now on assessing the damage, finding ways to restore operations at other parts of the observatory, and working to continue supporting the scientific community, and the people of Puerto Rico.”

The team at the site had already been monitoring the telescope with surveillance drones, among other methods. In the process, they had discovered unknown exterior wire breaks, damaging several of the roughly 160 strands that make up each suspension cable.