The newest NERF blaster ejects spherical rounds in a way that sends them careening around corners. The shape of the high-impact rounds means they can spin. The shape of the muzzle on each NERF Rival Curve Shot blaster combined with velocity of the round blasted through said muzzle makes for a round that spins upon ejection.

All NERF Rival Curve Shot blasters work with a special muzzle that allows rounds to “curve” through the air. Per NERF, “Turn the rotating muzzle to choose whether you want the round to go straight, left, right, or down.”

Since these little balls are blasting through the air at a tremendous speed*, eyewear is recommended for every model, but not included with purchase.

*Velocity isn’t quoted for the smaller two models, but for the HELIX XXI-2000, rounds are ejected at a velocity of 90 feet per second. That’s roughly 60+ miles per hour, mind you.

In the first wave of NERF Rival Curve Shot blasters were three models. The Flex XXI-100 was the smallest and the least expensive. The Sideswipe XXI-1200 carried more ammo and had a slightly larger body with a bolt-action loader. The largest of the three models included a pump-action loader. 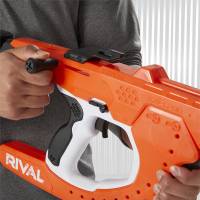 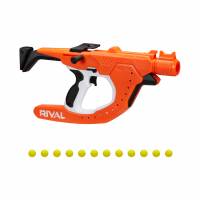 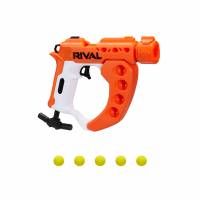 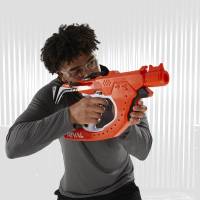 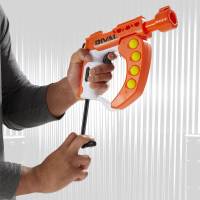 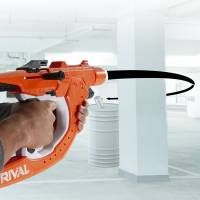 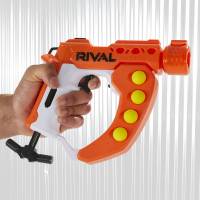 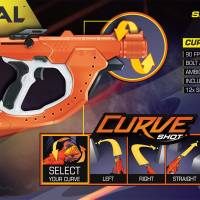 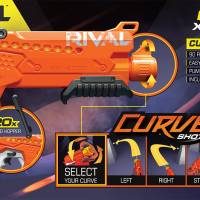 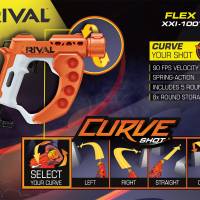 The Flex XXI-100 will be available for approximately $15. The price of the Sideswipe XXI-1200 will be approximately $25 USD. The price of the biggest beast will be closer to $30 USD. Take a peek at the demo images/video above to see what this business is all about, and stick around as we get a closer look at the lot. We’ll likely see these NERF blasters appear on must-have gift guides by the end of the year – assuming they continue to make them out there in the future!