As launch time approaches, the game developer teams at Ubisoft have revealed a full 6-minute gameplay video of the upcoming title Watch Dogs. This game works with a hero character that, at the time this game began development, was a futuristic smart city dweller. Fast forward 4.5 years later when the game is about to be released and the entire environment has become so real that technology security experts have been brought in to consult on the final product.

What this demonstration of the game presents is the world promised by early previews, one in which the gamer lives in a sea of information. As citizens of this connected Chicago walk by, the user has the option of hacking their electronic connection to everything. Name, occupation, cash, and all. 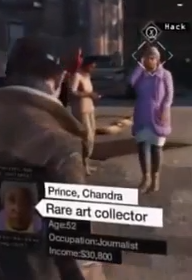 Watch as a woman named Chandra Prince walks by the hacker hero of this game and, with a tap of the display of his smartphone, he finds her age, occupation, income, hobbies – and has the option to steal from her bank account digitally. Every citizen of this city has a machine in their pocket or in their hand, and through that machine they’re open to attack.

It’s in this world that Watch Dogs is shown to be not just the silent killer’s playground of games like Tenchu: Stealth Assassins, but one where a villain can – at first – walk around in broad daylight. Of course once the user finds himself on the wrong end of the law, the police make cameras and sound detection tools an all-encompassing web for our hero.

As you’ll remember from SlashGear’s previous investigation into the world of Watch Dogs, this city has Batman-like sound detection capabilities. It’s not safe to speak without a muffler – not if you want to remain anonymous. Fire a gun and you’ll be triangulated – break a window and it’ll be heard by the cops.

Just as it is with any caped crusader-type situation, the player of this game will soon find themselves addicted to making full use of their ability to see and hear all. As “potential criminals” roam the streets with Crime Probability meters attached to them, following them like a Pre-Crime unit will be the gamer’s prerogative.

This video game will be able to be played in an open-world fashion if the user wishes, this the same sort of deal made popular by the Grand Theft Auto series on the original PlayStation. They’ll also be able to follow plotlines that lead them into heavy trouble with both digital crime syndicates and the police, both of which have access to the big brother cover that intertwines the city.

Watch Dogs will be coming to a gaming machine near you on November 19th. It’ll be released to your high-powered gaming PC, WiiU, Xbox 360, PlayStation 3, and more – those four bases being the first wave only. This game will eventually also have mobile components so the user can continue playing while on-the-go on smartphone and tablet machines, making the game as real as its story – watch yourself! And don’t forget your stealth skill!