Among the most important items bicyclists rely on to stay safe when riding at night are lights for their bike and reflective material either worn atop clothing or attached to the limbs. But Swedish car maker Volvo, which has a long track record of focusing on safety with their vehicles, has come up with something different as part of a collaboration with advertising agency Grey London and Albedoo100. It’s called LifePaint, and it can be sprayed on bikes, clothing, and helmets in order to make them glow white when in the path of a car’s headlights.

Interestingly, LifePaint isn’t really a spraypaint at all; while it’s reflective at night, it’s completely invisible during the daytime, meaning you wouldn’t see anything on your bike or clothes until it’s dark and lights are pointed at them. Also, the material is washable and a single application is said to last about 10 days. It doesn’t change the colors of anything it’s sprayed onto, and it can be washed off of clothes without leaving a stain. 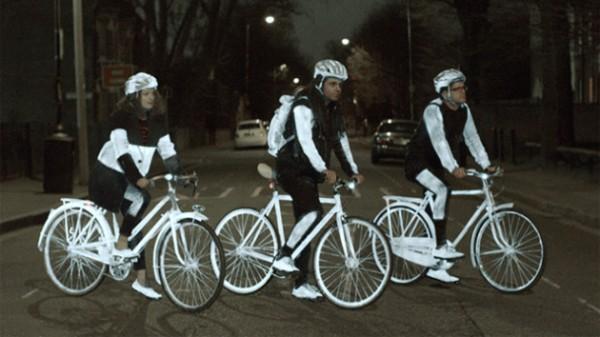 As of now, the spray is only being made available at six cycling shops in the London and Kent areas of Britain. Volvo Car UK says that more than 19,000 cyclists are injured each year when riding on the country’s roads, and as a way of trying to reduce the number of accidents, they’re introducing the spray with a motto of “the best way to survive a crash is not to crash.”

Unfortunately the product’s limit to six UK shops is part of its test for consumer popularity. If it does well, Volvo may consider an international release, which it seems they’d be crazy not to do. As LifePaint can applied to other things like backpacks, shoes, and dog leashes, it has the potential to improve the safety of a number of activities that are done outside and at night.