If you’re into the portable projectors, Vivitek might be a name you’re familiar with, and they just announced a new “pocket protector” called the Qumi Q7. We ended up getting our hands on the new device, and while the mini projector isn’t really worthy of fitting in a pocket, it’s still small enough that you can easily take anywhere without hassle.

The Qumi Q7 is a LED-based projector and weighs just 3.1 pounds. It provides 800 lumens of brightness and offers over 30,000 hours of operating time. It’s also 3D-ready, thanks to Texas Instruments’ DLP Link technology, and it integrates 2D-to-3D content conversion technology for standard and Blu-Ray 3D playback. 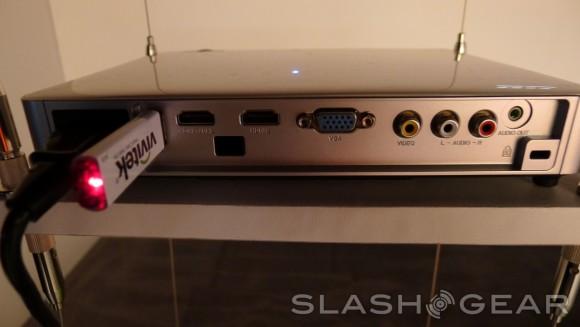 The Qumi Q7 also features the unique touch sensitive button controls and a sleek design that’s familiar across the Qumi family of projectors. It’s already ready to be used with a variety of devices, including digital cameras, laptops, smartphones, tablets, and more.

Specifically, the Qumi Q7 outputs at 1280×800 HD, and it includes two HDMI ports, VGA-In, Composite Video, Audio-In RCA, and a USB port. There’s also 4GB of on-board storage, and Microsoft Office as well as Adobe Reader are built-in. The Qumi Q7 will be available sometime this summer at a steep price of $999.