Virgin Orbit, Richard Branson’s small satellite launch service, has successfully dispatched its latest payload today, further demonstrating the potential of the Boeing 747-based system. While Virgin Galactic may be focused on taking passengers and cargo into space the old fashioned way – atop a huge rocket that blasts off from Earth – Virgin Orbit was spun out to take a different and potentially much more affordable approach.

It’s what’s known as an air launch, and it relies on a heavily modified Boeing 747 aircraft to effectively deploy rockets while already in mid-air. The custom LauncherOne rockets are transported on the 747 up to around 45,000 feet, and then they detach from the plane.

Once clear, the rocket engines fire and they accelerate – complete with the payload – into space. The first launch, shown at the top of the page, took place successfully back in January 2021.

Today’s mission – which Virgin Orbit called “Tubular Bells” – saw the Cosmic Girl jet take off from Mojave Air and Space Port in California. Once off the coast, the plane circled in what the company describes as a “racetrack” pattern while awaiting final permission to launch. Separation took place shortly after, and then LauncherOne’s first stage engine ignited to accelerate it up into space.

“Preliminary analysis of the data tells us we perfectly hit our target orbit and payloads are deploying,” Virgin Orbit confirmed at 12:24pm EDT. 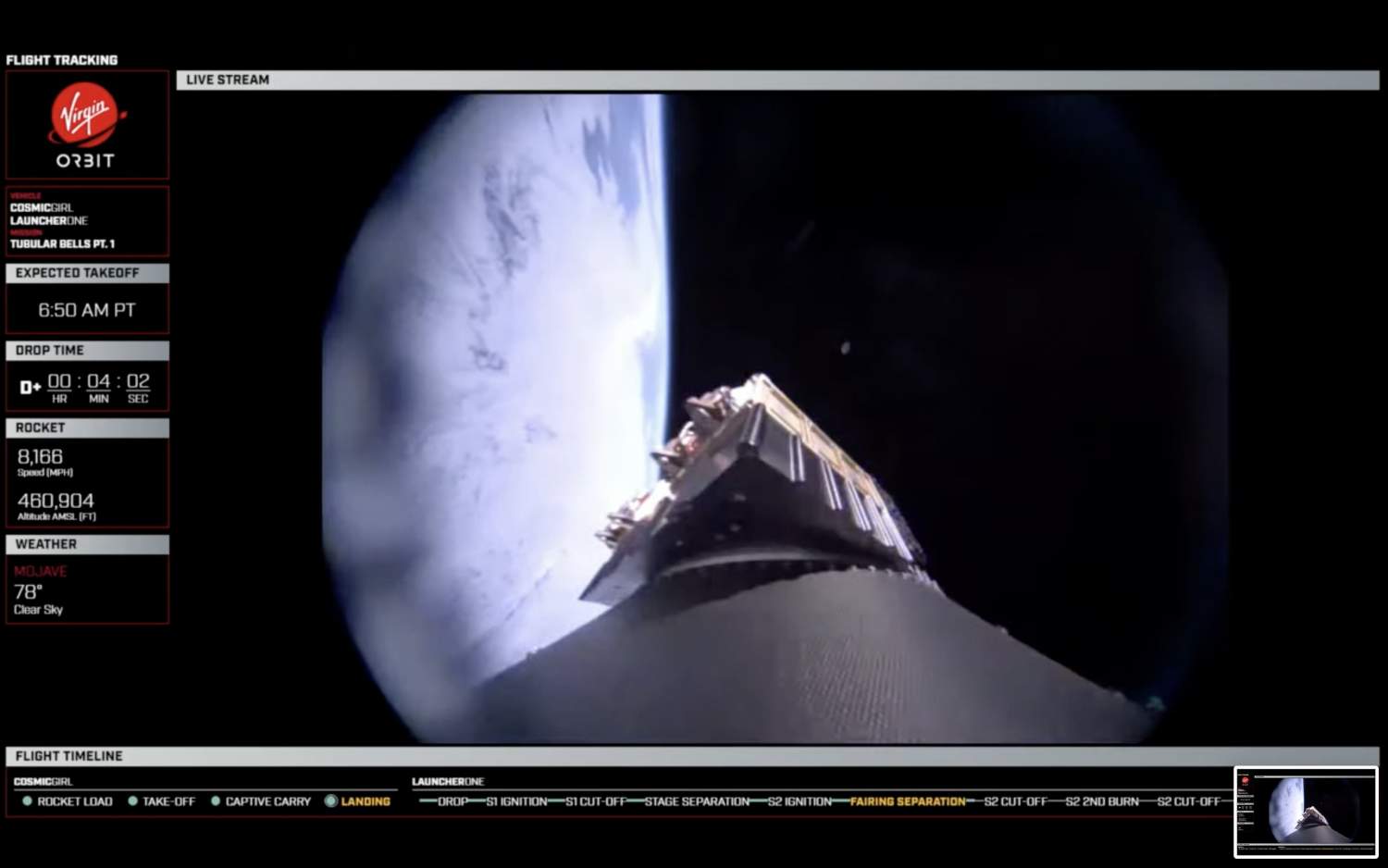 Onboard are four cube satellites, which Virgin Orbit is launching for the US Department of Defense’s Space Test Program. Two imaging satellites for SatRevolution were also onboard, plus a final satellite for the Royal Netherlands Air Force. The company has a maximum payload of up to 500 kg per satellite.

That may not be as large as some, but the company argues that its system can be a lot more cost-effective. Low, medium, and high orbits can be established once LauncherOne separates, and Virgin Orbit says it can be prepared for a last-minute launch in a matter of days.

Part of that flexibility is down to the ground-based support, which Virgin Orbit designed to fit into six mobile trailers. These could theoretically be moved to any spaceport around the world, the company points out, allowing regional access as well as cutting down on time-consuming transportation of delicate satellite equipment.

While today’s launch was no small achievement for Virgin Orbit, the company is hoping that soon it’ll be commonplace. One of the key strategies for the startup is to put regular launches on the schedule, tapping economies of scale to build out the commercial viability of the service.

Update: Virgin Orbit has released video of the moment the LauncherOne rockets separated from the 747’s wings:

Here's a glimpse of rocket drop today from the cameras onboard our flying launchpad, Cosmic Girl. ✈️#TubularBells pic.twitter.com/JiVTNmw71d