Think about it: have you ever seen an astronaut eat a donut in space? I can’t recall one ever doing so, which is dumb. Donuts are delicious. They’re also weird. So are the Swedes, two of whom are responsible for launching a donut into the atmosphere via a weather balloon. If you’re asking yourself “why”, don’t. There’s no rhyme or reason for this other than the absolute thrill of launching pastry into orbit. It’s believed to be the first donut in space, too, for what it’s worth.

Alexander and Benjamin Jönsson from Lysekil, Sweden launched a weather balloon carrying the donut into space via Norway. The brothers say they had permission to launch the balloon (and donut!), so don’t go strapping crullers on rockets in your back yard. 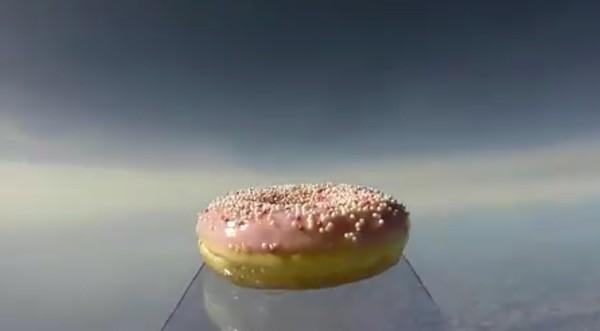 Speaking to Swedish outlet Local, Alexander said “I’m really into space and photography, and I used to play around with weather balloons back in school. Then we had the idea that we should send something really crazy up into space and thought ‘Hey, nobody has ever sent a doughnut up before.’”

After a successful launch, the balloon popped while in orbit, sending the donut careening to the Earth below. It landed in Lake Vättern, Sweden, where it was recovered by the Swedish Sea Rescue Society.

Cool? I dunno. I feel like a donut is best served in my stomach instead of space. But hey, when in Sweden…