VIA is well known for its ultra-compact mainboards and low power CPUs, though Intel’s Atom processors have generally cornered the market when it comes to nettops. The VIA ARTiGO A1100 is the company’s attempt to remedy that, a palm-sized barebones PC that’s smaller than a stack of DVD cases and yet, they claim, is capable of 1080p Full HD via an HDMI output. Is the ARTiGO A1100 the DIY HTPC we’ve been waiting for? Check out the full review after the cut.

It’s certainly compact enough to get lost under your HDTV, just 5.7 x 3.9 x 2.0 inches and made of sturdy metal and silver plastic. Although there are rubber feet for standalone use, you can also VESA mount it to the back of your display. Ports include audio in/out/microphone on the front, together with two USB 2.0 and a miniUSB, then VGA, HDMI, two further USB 2.0 and gigabit ethernet on the back. There’s also a DC power input – the external PSU is a reasonably small block – and a connector for the optional WiFi antenna. 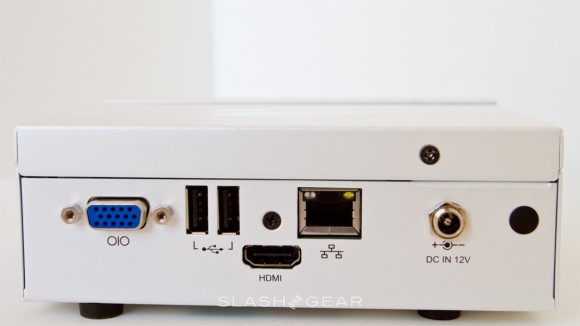 Although described as barebones, there’s not a huge amount that the ARTiGO A1100 is missing. It comes with VIA’s single-core 1.2GHz U2500 Nano processor and the company’s VX855 MSP, the latter combining the GPU, Northbridge and Southbridge into a single chip. All the buyer need fit is a 2.5-inch SATA hard-drive and a stick of DDR2 SODIMM memory (up to 2GB). VIA don’t add WiFi as standard, but do offer an optional board which is easily connected, and there’s an optional SD card reader too. 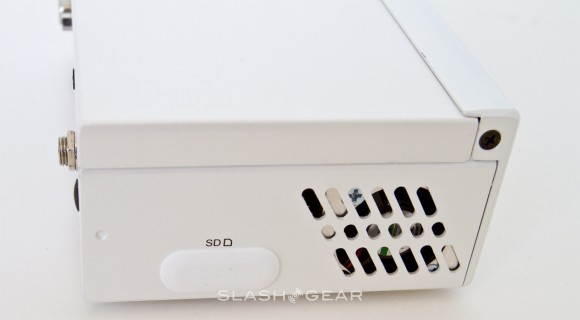 Setup, then, is pretty straightforward, though you obviously also have to add the OS of your choice. Though the U2500 is happy with 64-bit platforms, don’t expect to get the full Windows 7 Ultimate experience from the A1100: the VX855 falls short of Aero compliance, meaning much of the graphical niceties in Microsoft’s flagship OS are absent, and multitasking with anything but the most basic of tasks is wishful thinking.

Opt for Windows XP or a Linux OS, however, and things are a whole lot slicker, though you might fall foul of VIA’s DirectX 9 limitations. We generally prefer the more flexible VLC over Microsoft’s own Windows Media Player app, but the VX855 lacks hardware acceleration for anything other than WMP. That leaves you at the mercy of the CPU.

In use, it’s a quiet system; not fanless, but the tiny 25mm fan is a discrete whirring and likely to be drowned out by whatever else is in the room. Unfortunately it’s also not especially capable, and the ARTiGO A1100 box gets very hot in use. We’d have happily accepted a little extra noise – and perhaps a slightly larger chassis – for a bigger, more effective fan. The miniUSB port is a neat addition, however, allowing you to hook the PC up to another computer and treat it as an external drive. 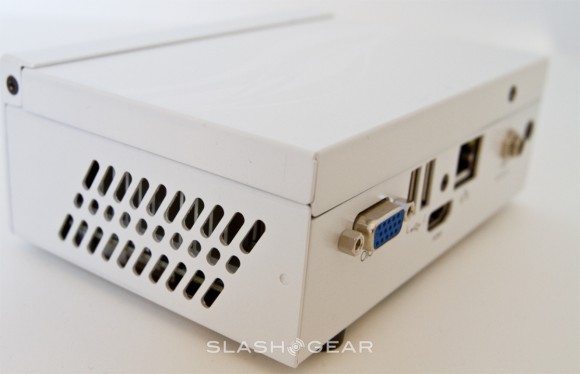 The CPU/GPU pairing was sufficient to play 720p HD video smoothly, but 1080p HD was less successful; at best we had some mild stuttering, while at worst there were multiple dropped frames and mis-matched audio. Obviously with no integrated optical drive or TV tuner, the ARTiGO’s HTPC credentials aren’t entirely solid. Office tasks and basic photo editing were more in line with the PC’s abilities, just as long as you’re content to do one thing at a time.

If the performance isn’t quite up to regular HTPC standards, neither is the basic functionality – at least not right now. We were unable to set the ARTiGO A1100 to boot up with its HDMI output active, instead finding it would always default to the VGA output. VIA is apparently working on a firmware update to fix this, but until that’s released it’s a frustrating flaw.

As with all barebones PCs, perhaps, the VIA ARTiGO A1100 isn’t really suited to a regular home user. With a street price of around $230 (budget $45 for the WiFi b/g adapter and $25 for the SD card reader) it’s cheaper than a prebuilt nettop, certainly, but factor in the time and money required to install an HDD, memory and OS, and then tweak the latter into giving the best performance with the CPU/GPU pairing, and you’re facing what’s obviously an enthusiast’s product.

If you’ve the patience and inclination, there’s plenty of potential for the VIA nettop. Its frugal power consumption makes it an ideal embedded device, as long as you’re willing to pretty much dedicate it to a single purpose: a simple file server, for instance. Unfortunately, what it won’t do is broaden VIA’s market among home users, at least until the company rolls out updated versions with faster, dual- and quad-core versions of the Nano CPU.