HTC’s new Windows Phone 8X proves that the manufacturer is capable of building a solid Windows Phone 8 device. We’ve already taken a look at AT&T’s version of the 8X, as well as T-Mobile’s variant, but Verizon has the new device in its repertoire as well, and we’ve got it right here in front of us to see what this version offers. Since we already went over the basics as well as the more advanced stuff with the original full review, as well as dabbled around with T-Mobile’s version, I’ll just be briefly providing an overview of Verizon’s version for those who may be interested in grabbing the device from Big Red.

The HTC Windows Phone 8X sports a 4.3-inch Super LCD2 720p display with a pixel density of 342ppi, and it’s protected with Gorilla Glass 2. We have to say that there’s not much to complain about with the display — viewing angles are adequate, and images and text are really crisp. The back consists of a curved piece of soft-touch plastic that provides a wonderful grip for those with butter fingers. The back is also flat enough that the device is able to rest on a surface without rocking back and forth. Holding the device feels great, and since it has a smaller 4.3-inch screen, the overall size of the 8X doesn’t make it overwhelming to hold.

Below: Our own Cory Gunther walks us through Windows Phone 8 using the HTC Windows Phone 8X, which is the same device featured in this review, save for the carrier.

On the top of the handset, you have the headphone jack (enhanced with Beats Audio technology, of course) and the power button, while the volume rocker and a dedicated camera button are placed on the right side, along with the SIM card slot towards the top. On the back, there’s the 8MP shooter with the speaker placed towards the bottom right underneath the carrier branding. The microUSB port is placed directly on the bottom in the center — right where we like it. 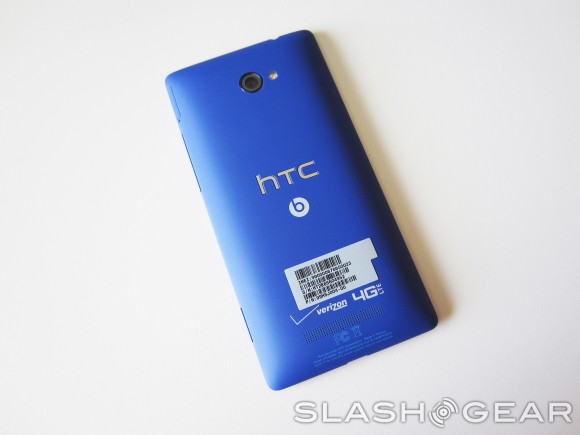 On the inside, there’s the Qualcomm Snapdragon S4 chip with a dual-core Krait processor clocked at 1.5GHz — the same chip that’s in the Samsung Galaxy S III and Nokia’s Lumia 920. Partnered with the S4 are Adreno 225 graphics, and there’s also 1GB of RAM and 16GB of internal storage (sorry, no microSD slot on this one either). 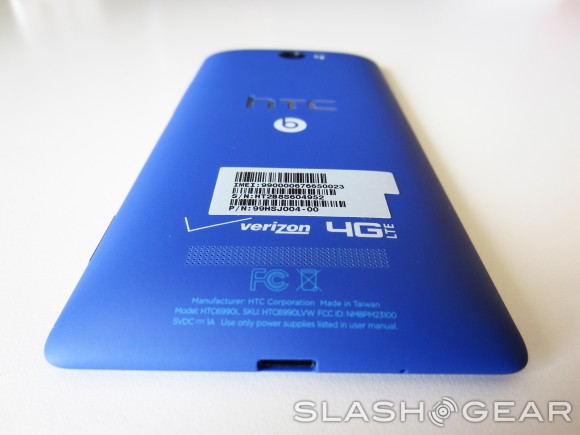 There’s really nothing to scoff at when it comes to performance. The 8X is fast and snappy, and the animations (which are what makes Windows Phone 8 look really good) are incredibly smooth. Apps opened quickly, and the dedicated camera button on the side of the phone makes it easy to snap a photo, which is great to have, honestly, since the camera app takes a bit of scrolling to get to. The 1800mAh battery is adequate, and while you’ll be able to go most of the day without having to keep it near an outlet, you’ll most likely have to charge it up by the evening with average usage. 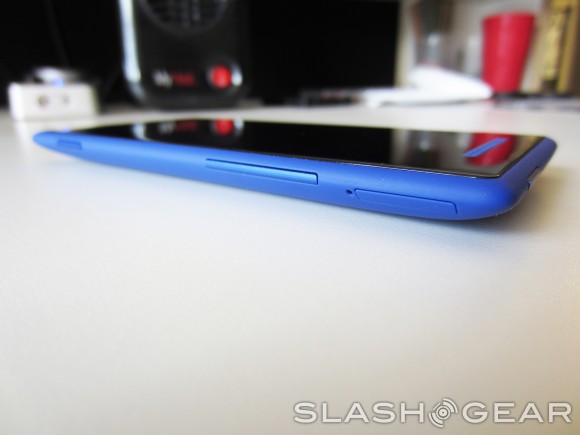 Verizon’s version of the Windows Phone 8X has a little bit of the carrier’s own offerings squished inside the rest of the WP8 user interface. Thankfully, Verizon doesn’t go too crazy with the carrier-specific apps. There’s VZ Navigator, NFL Mobile, and My Verizon Mobile, which lets you manage your Verizon account and check to see how many minutes you’ve used up, as well as how much data you have left during the billing period. None of Verizon’s bloatware — if you could even call it that — gets in the way at all, and I actually hardly even noticed that the apps were there. 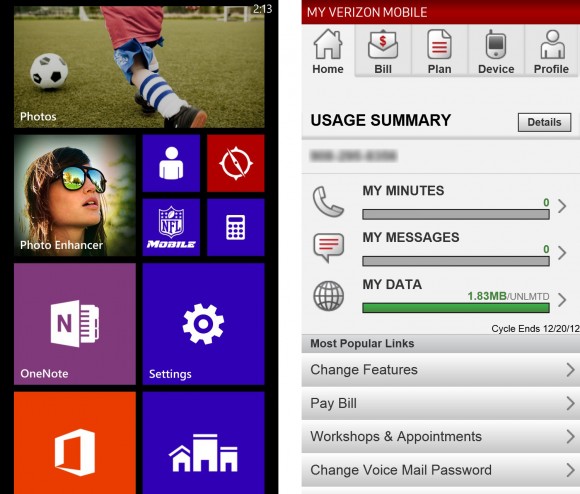 The 8X has an 8MP f/2.0 rear camera with a 2.1MP front-facing shooter. There’s nothing to complain about here, and while it’s not the best camera on a Windows Phone 8 device, it certainly performs. If you can’t get your hands on a Lumia 920 (which arguably has the best camera on a WP8 handset), the 8X is a good second choice. It handles low-light conditions surprisingly well. Although, even with adequate lighting, images sometimes appear darker than what they should. However, autofocus, as well as auto-exposure and white balance work pretty well. 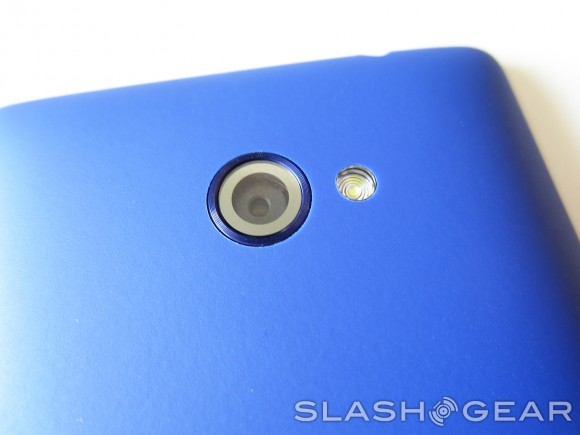 The dedicated camera button on the side of the device is two-stage, which means you can push the button halfway down to lock in the settings and then all the way down to snap the photo. The button takes a little bit of force in order to push it down all the way, but you can also use the touchscreen as the shutter button for an alternative. 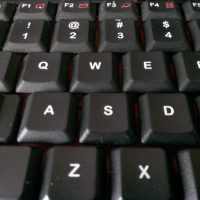 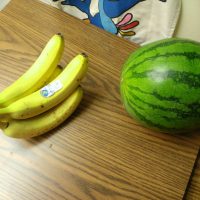 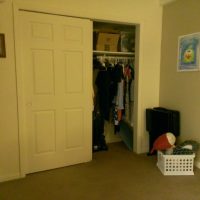 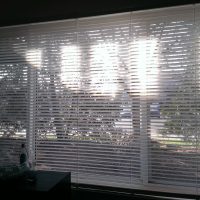 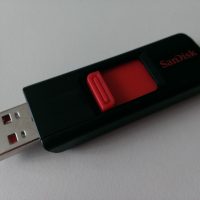 Essentially, the 8X from HTC is a great and solid device to test out Windows Phone 8. Personally, it was my first time playing around with Windows Phone 8, and while it did take a little bit of time to get used to the UI, Microsoft clearly made a clean and and stylish mobile operating system, and it ran great on the 8X. Overall, if you’re wanting to stick with Verizon as a carrier (thus, taking the Lumia 920 out of the running), the 8X is an excellent choice if you’re looking for a Windows Phone 8 handset. Of course, there’s only a few options to choose from on Verizon, so the competition is still light at this point, but for $199, the 8X can certainly compete with other handsets out of the WP8 group. 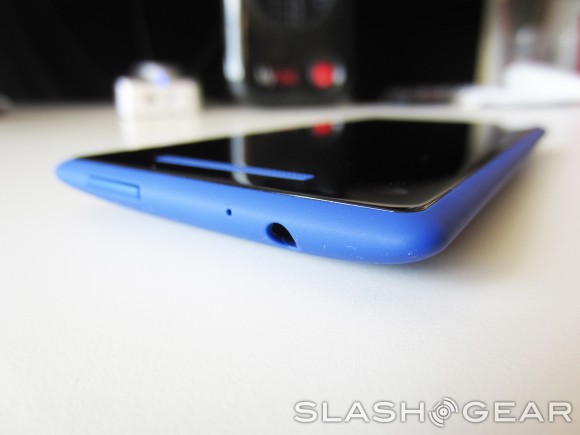