Velocity Micro are no strangers to tablets – the company attempted to crack the market with the M5 MID back in 2009, a rebadged aigo P8860 – but we reckon they’ve a better chance this time around with the Cruz Tablet and Cruz Reader.  Each model has a 7-inch capacitive touchscreen, runs Android 2.1 and supports Flash 10.1, but the real boon is the price: the Cruz Tablet is expected to come in at $299.99, while the Cruz Reader will be $199.99.

According to BestTabletReview, each model has an 800MHz processor, SD card slot, basic Android apps including browser and media player, an accelerometer, USB connectivity and a 3.5mm headphone socket, along with a user-replaceable battery, speaker and microphone.  The 7.5 x 5.6 x 0.6 inch Cruz Reader will be targeted, as the name suggests, at ereading duties, with the “Cruz Market” app store for downloading software and ebooks.

Meanwhile the Cruz Tablet throws in a 2-megapixel front-facing webcam together with a docking station that charges the slate as well as allowing it to work as a digital picture frame.  Engadget have acquired some live shots, and while the Cruz Tablet looks relatively generic we imagine there may be some fettling done before the models launch in summer 2010. 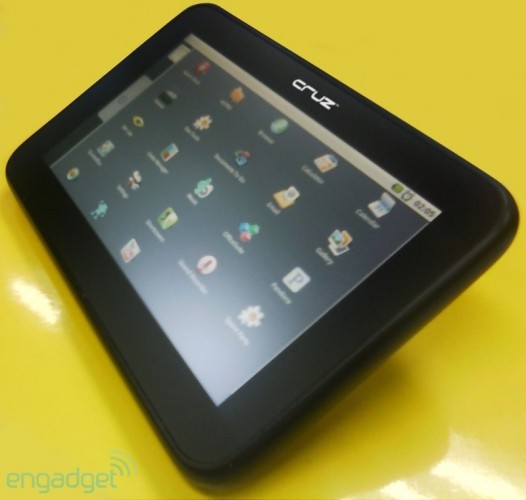