A user by the name of “Droogie” (Joseph Tartaro) decided he’d be clever and register a custom license plate with the word NULL. That means blank, empty, the end – it’s not a word you hear people use all that often other than to say “null and void” – which, incidentally, was part of Tartaro’s plan. He’d intended on getting 2 custom plates, one for himself, the other for his wife, one that said NULL, the other VOID.

Tartaro spoke at DEF CON this year about his situation and the implications therein. His talk went by the name “Go NULL yourself : or How I Learned to Start Worrying While Getting Fined for Other’s Auto Infractions.” He spoke about his attaining of a NULL plate, the fallout, and questions on “real situations from unexpected data.”

After attaining his plate, his first interaction of interest came in renewing his plate’s tags. Upon using the California DMV website to attempt to get new tags, the website returned a message saying he’d entered “invalid information” – much the same as if he’d entered the same VIN number (his own) and a completely random license number.

He used an alternate method of attaining tags and moved on. The next point of interest came when he received a single parking ticket. This was a legitimate parking ticket – not something Tartaro apparently gets very often.

California works with a CPC, a citation processing company. Tartaro looked up his citation number using the CPC and paid his ticket. This is the key moment. It was at this moment that the CPC system was able to confirm that the license plate NULL belonged to Tartaro.

Tartaro began receiving massive amounts of mail – bills. Bills for unpaid parking tickets and traffic violations. According to Tartaro, these were “.GOV contracts” that “appear to be collection.” He went back to the CPC website and ran a search – their site allows for a citation search with search operators Plate and State.

Entering NULL and CA, Tartaro found that “his” new amount owed was approximately $12049 USD. Upon speaking with a CPC representative, Tartaro was asked to do three things:

He declined to offer these things, not least of all because it would have taken a large amount of time and effort to fix each ticket individually. Tartaro then found a ticket where data had been recently modified. The paper ticket he held in his hand had the details of a vehicle he did not drive – the same ticket (as shown in their database, recently edited) showed his own vehicle’s information. 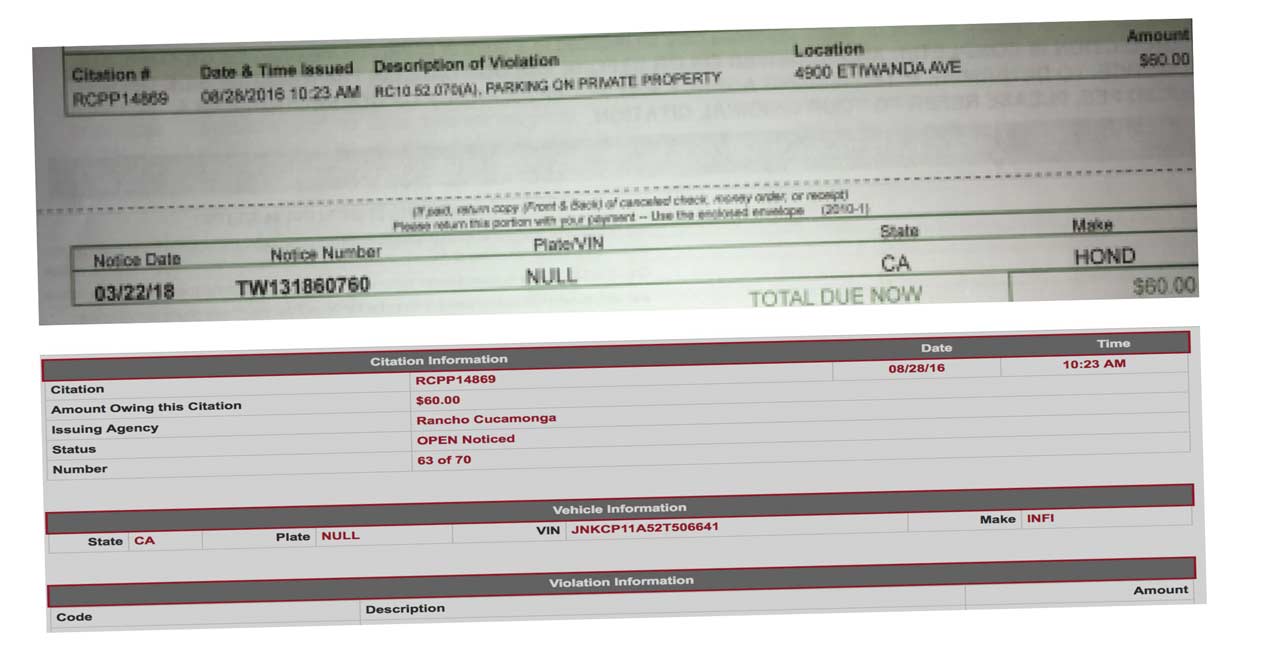 In other words – it looked as though someone at the CPC manually modified one of the non-Tartaro NULL tickets to look as though it’d been correctly assigned to Tartaro’s vehicle. Upon calling the CPC, this editing of tickets (to match Tartaro’s info) continued. (NOTE: Fans of XKCD might remember this now-relevant comic.)

It would seem that Tartaro’s situation was eventually (mostly) rectified by the California DMV. He was able to get his original $12k removed from his name… then the subsequent $6k in additional tickets that came soon after that… Now, according to Wired, Tartaro is down to around $140 (as of the 13th of August) and the DMV was aware of and was dealing with the CPC’s falsification of ticket details.

This isn’t the first time a custom license plate landed a driver in the fine hole. In Washington D.C. in the year 1987, a driver by the name of Danny White attained the vanity license plate NO-TAGS. Have a peek at a local newscast of that situation in the video below.

The story of Danny White didn’t really go wide until around February of 2012, where the video you see above was shared en masse. Because of the internet.

In the year 1979, one Robert Barbour of Los Angeles applied for a vanity license plate for his vehicle, and was given a sort of instant-rundown set of three lines for potential plates. His first choice was SAILING, then BOATING. If he couldn’t get one of those, he would just get a standard plate, so on the third potential plate name line, he wrote “NO PLATE.” You can probably guess what happened next.

An Associated Press article published in the Southeast Missourian back on July 25, 2004 spoke of a man named Jim Cara. This man lived in Wilmington, Delaware, and thought the license “NOTAG” would be a hoot. They suggested that “the new tag arrived in the mail Saturday, along with an avalanche of city parking violations.” 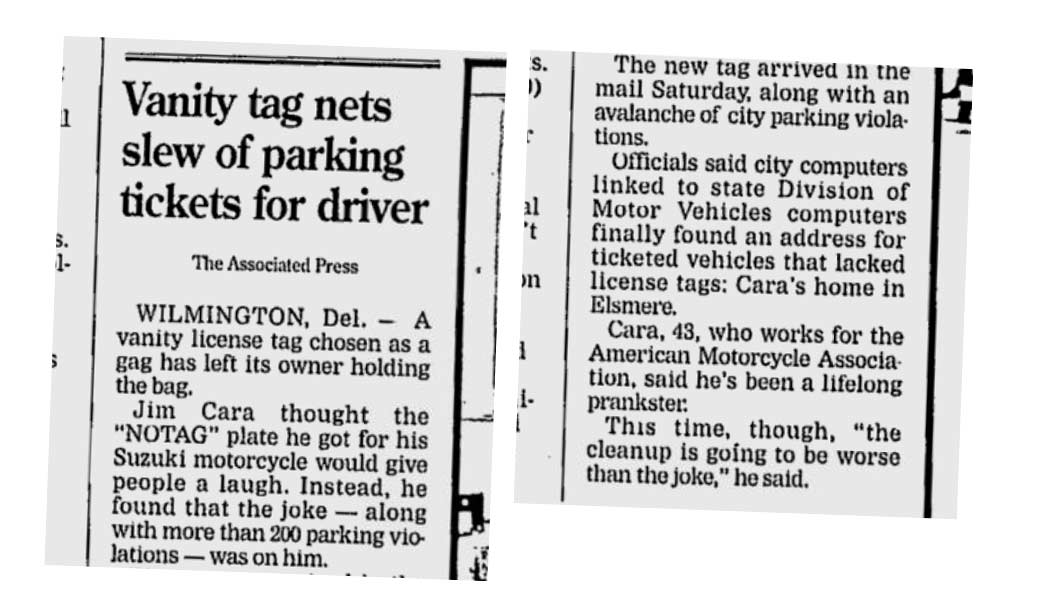 Nick Vautier’s got a stack of tickets totaling well over $3k – or at least that’s how much he’d accrued back in 2004. He made his own “100 Parking Tickets” website about his situation. He seems to have a good sense of humor about the situation, despite his extended period of legal run-ins due to tickets for vehicles he never drove. 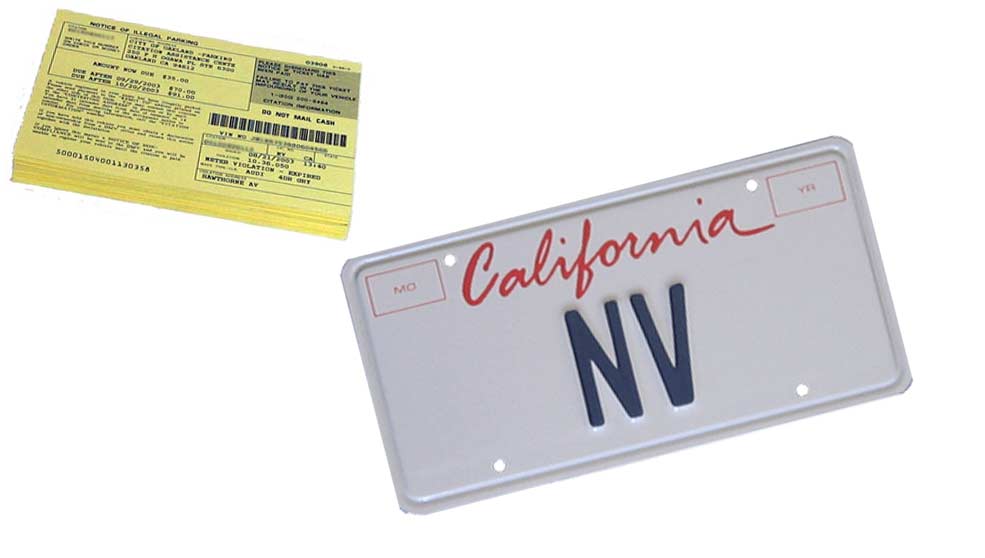 The System is Down

The DMV, the traffic police, and private organizations responsible for issuing tickets to citizens (CPCs) are still dealing with this issue… and this set of issues. There is no considerable public evidence to suggest that the overarching issue has been resolved – only quick fixes seem to have been initiated.

For example the story on Barbour (plate attained in 1979, story published in 1986) suggested that the DMV “issued a notice to law enforcement agencies asking that they use the word ‘none’ when writing tickets on cars without plates.” It was reported that Cara’s incoming tickets had “slowed” but not stopped.

Vautier seemed to be able to end his nightmare by returning to the DMV in Oakland with his plates and his full stack of over $3,000 in tickets. After assurances that his tickets would be under “administrative review” he found that his tax refund would be garnished and that it seemed like the tickets were still his responsibility.

You’ll find similar last-we-checked updates for each of the other stories. Once each plate was registered to a state’s DMV with a person’s identification, they seemed to be sent tickets regardless of where they traveled or what car they actually drove. CPC employee’s ability to edit government-bound tickets is another issue to which we’ve not seen an acceptable amount of acknowledgement or action. What’s to be done?