If you’ve watched our two hands-on videos from MWC09 (here and here)you’ve probably seen all you can stomach of the UMID M1, but the company still has a few surprises in the shape of their retail bundle.  While the first batch of Korean M1 pre-orders – sold there as the mbook – have been recalled due to dodgy build-quality, that hasn’t stopped the reviewers from detailing exactly what you get in with the mobile internet device.

In fact Lazion are going over the whole MID with a fine tooth-comb, and promise more than just unboxing photos.  Until then – and until we have final, tweaked production hardware to look at – here’s how UMID get past the ports problem (with a few bizarrely shaped, and probably easy to lose, dongles) and the included headset.  Happily one of the dongles gives the M1 a standard headset socket, but we wish there were two USB ports on the dongle, rather than just one.

We’re also not especially impressed with the size of the M1’s power-brick, which looks to be thicker than the MID itself.  Admittedly the M1 is pretty tiny, but we’d still prefer to see a PSU that doesn’t dwarf it. 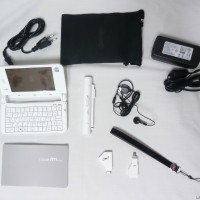