German designer Volker Hübner developed this tablet he calls the m • pad to cater specifically to the needs of designers and developers. It combines the functionality of a 15.6″ OLED display. It also includes full multi-touch functionality married with a pressure sensitive stylus. Looking at the pictures from Yanko also suggest that this tablet should have a wide range of USB, Ethernet, firewire and whatever else available for connection external keyboards or mice for a more traditional computing experience. 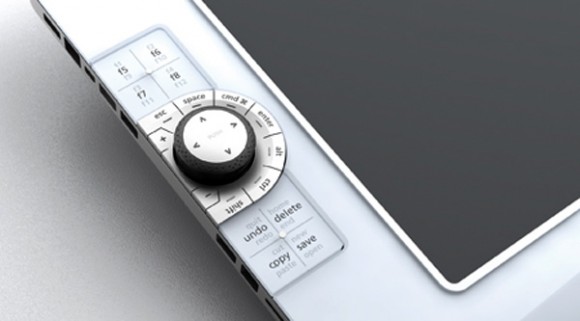 The side panel contains a scroll wheel and nine fixed buttons. This is for things like escape, space, control, shift etc. It’s designed so that one hand manipulates the stylus and touchscreen while one works with the panel on the side. The eight buttons lined up above and below the fixed buttons are all actually small e-ink displays that shift form and function based on context. The design also includes kickstands on both sides so it’s equally ergonomic for lefties.

The technology that’s coming out right now in tablet computers is honestly unlike anything else. The confluence of large and relatively inexpensive touchscreens (that don’t suck), bright and long-lasting OLED screens(that are affordable for the average Joe), and systems on a chip(RISC did change everything, Hackers was right!) changed the game forever. As I’ve heard my friends often exclaim with glee, “We’re living in the future!”