An entirely new kind of space body was seen over the past few hours – and what a strange sort of space matter it is! This is Ultima Thule, the latest space object detected and photographed by NASA’s New Horizons mission. This was the same mission that gave us our closest-ever look at Pluto – now it’s headed beyond – out into the Kuiper Belt!

After a few hours of waiting for images to be beamed back from the Ultima Thule flyby, we now have our closest views yet of this super strange space body: Ultima Thule. This is what’s called a Contact Binary – two separate entities that combined to create one. “The team has dubbed the larger sphere “Ultima” (12 miles/19 kilometers across) and the smaller sphere “Thule” (9 miles/14 kilometers across).” 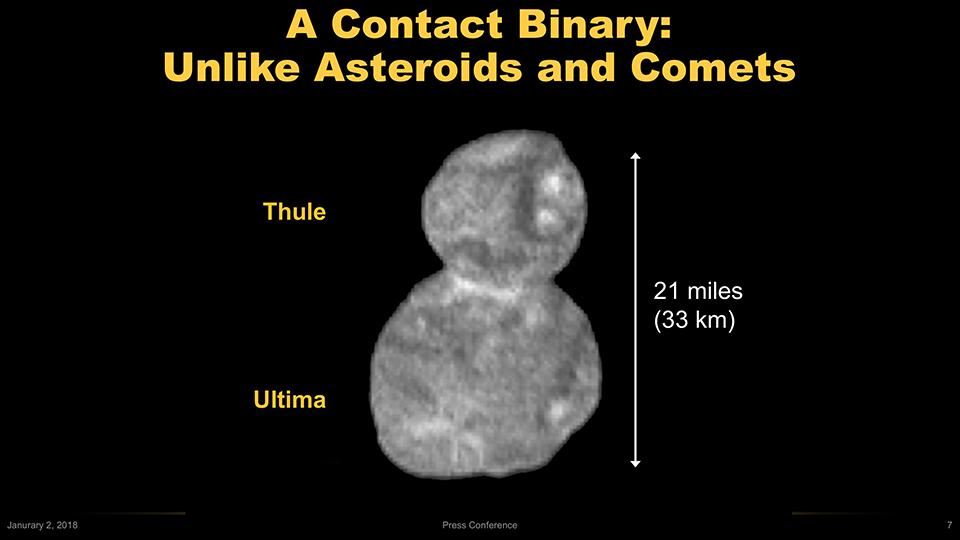 While it might seem like this is all one lumpy set of rocks, the consistencies are that of ice – and the surfaces are anything but flat. They aren’t as mottled as our moon, but they’re not particularly smooth – and might not be made from one single sort of matter. 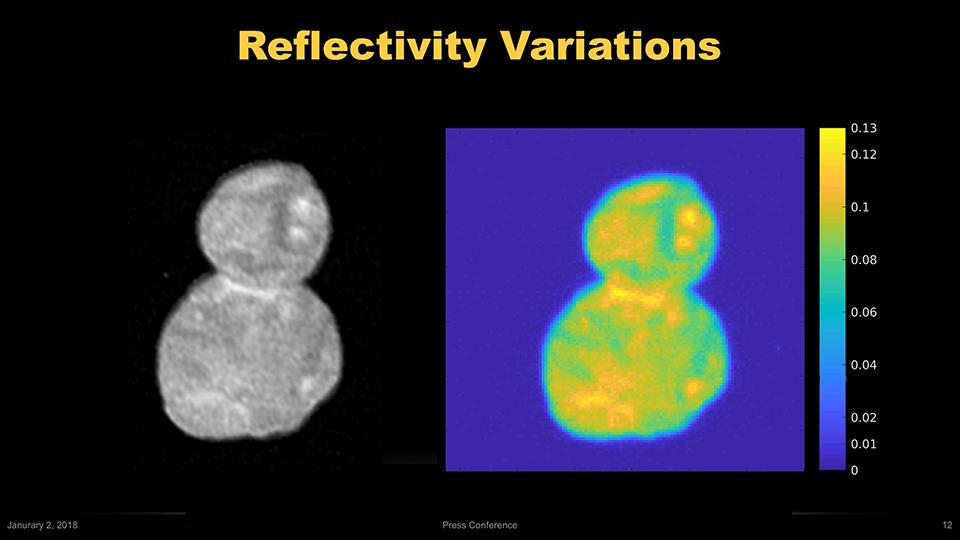 NASA/Johns Hopkins University Applied Physics Laboratory/Southwest Research Institute suggest that Ultima Thule is 21 miles (33km) long at its longest, and it is currently rotating. One full rotation takes around 15 hours (give or take an hour). The rotation variables here are figured by watching the light curve given by Ultima Thule – it’s most certainly a spinning set of buddies. 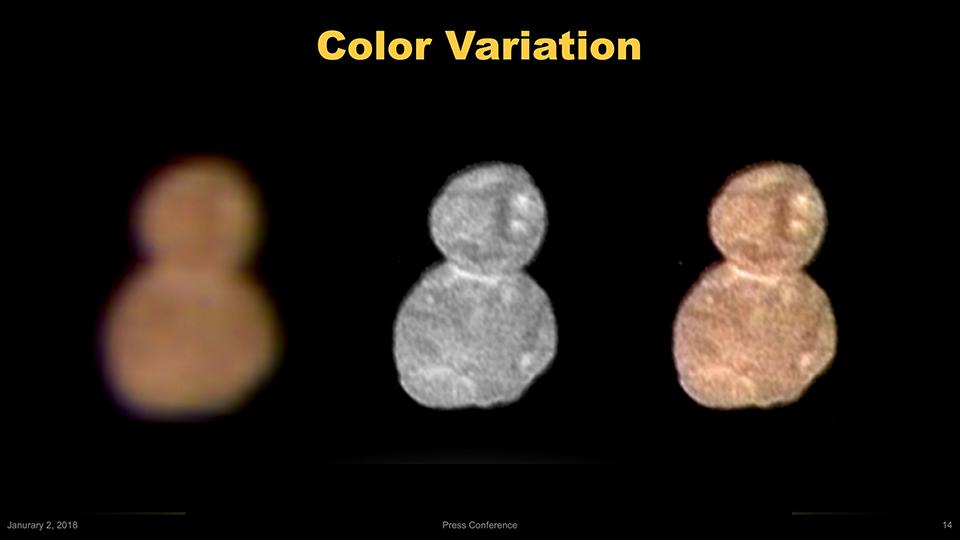 The rotation point (as you’ll see in an image below) is off-center on the larger of two spherical bodies. It would seem that the density of these two bodies has a measure similar to that of water ice. 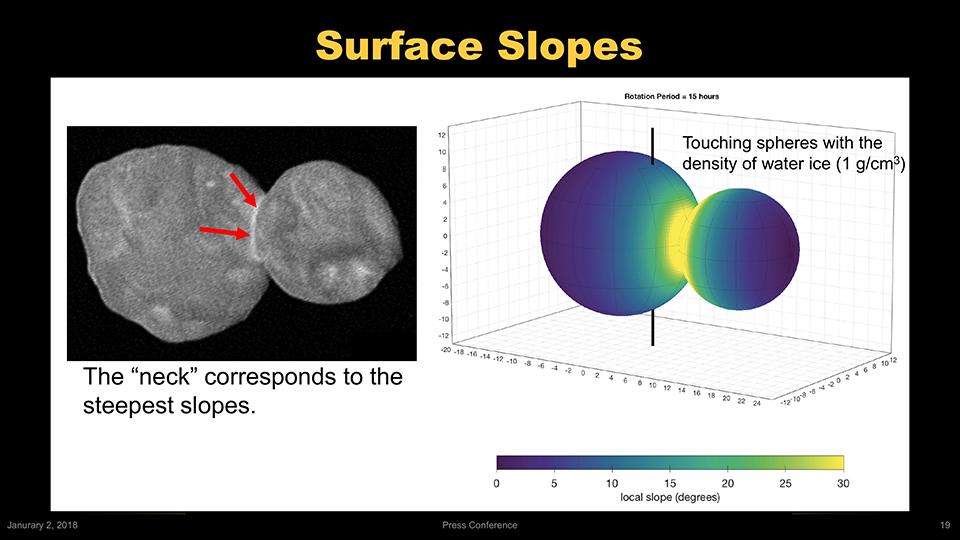 The first color photography of Ultima Thule was shared today and compared to our best-yet look at Pluto. Notice the similarities between the reddish rocks (or other slightly less obvious sort of matter) on Pluto – a big clobbering of the color – and the entirety of Ultima Thule. Almost like Pluto’s nearest neighbors had something to do with its formation and subsequent bombardment. 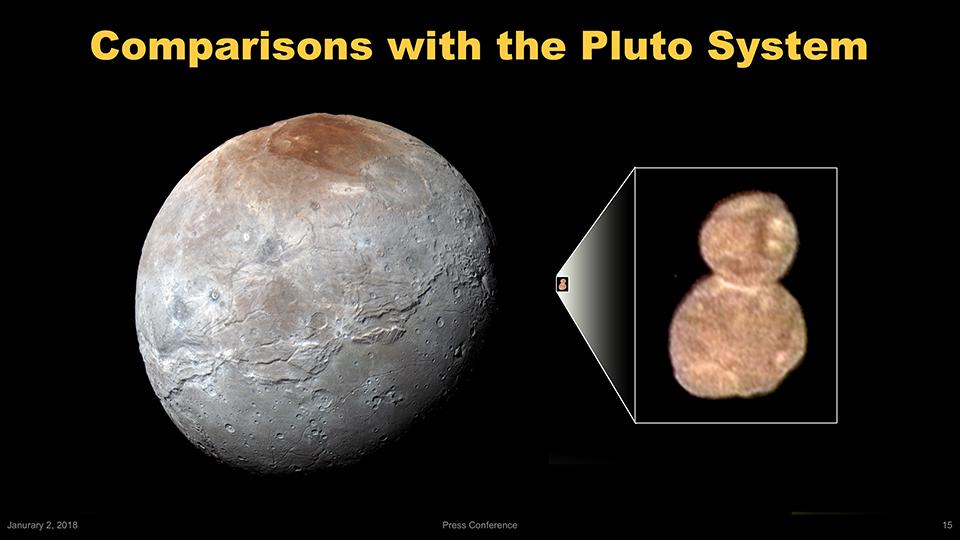 NASA/Johns Hopkins University Applied Physics Laboratory/Southwest Research Institute and so forth have begun analyzing all aspects of Ultima Thule, including its most basic elements – like its number of hills, ridges, impact craters, etcetera. Notice here how there don’t appear to be any major impact craters. This would indicate that Ultima Thule’s either never had a run-in with another space body and/or was broken off of some other larger body of material so recently that no major added damage has yet occurred. 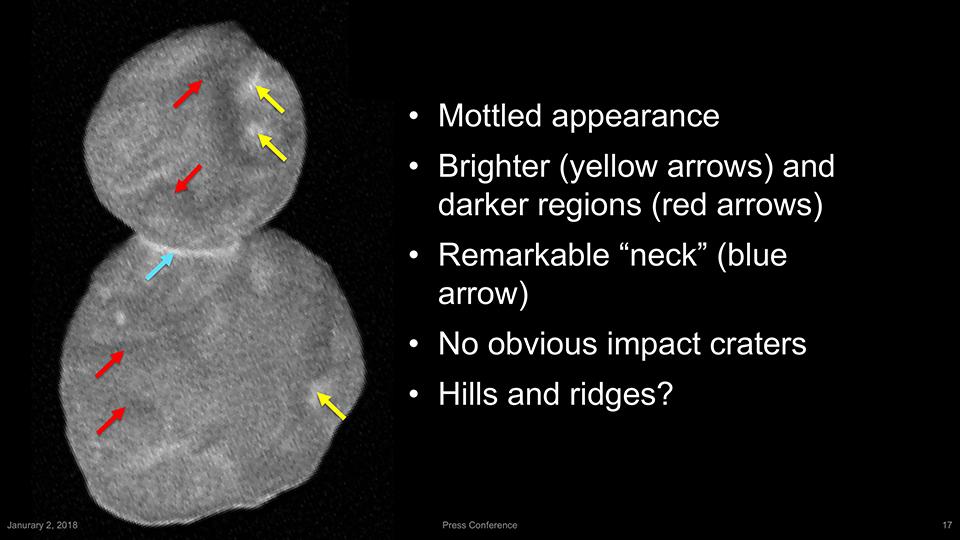 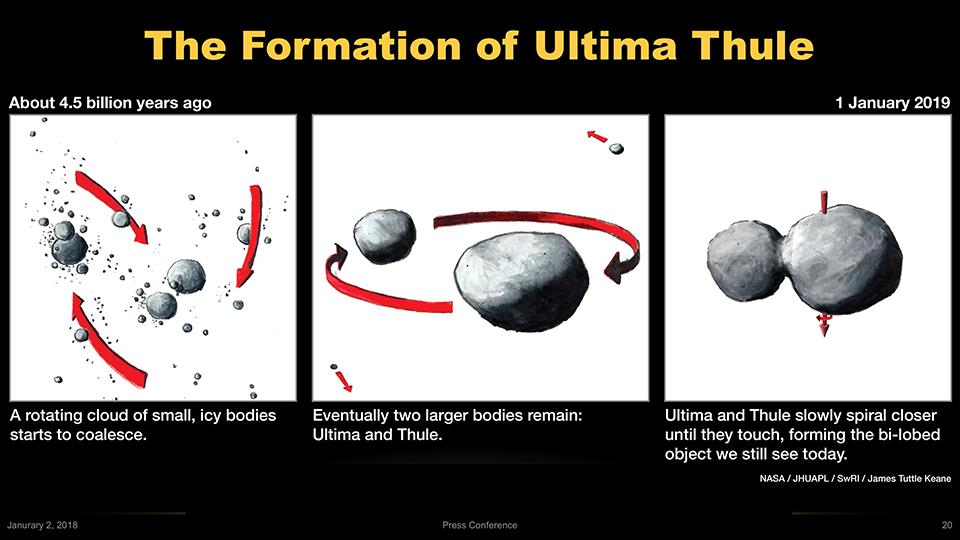 These are only the first photos of Ultima Thule giving us a good look at the side facing the New Horizons craft. Eventually here we’ll get side photos and backside photos, too. While New Horizons already passed Ultima Thule over a day ago at this point, it’s still going to be sending photos and data it captured during its trip for weeks to come.