BCN Japan took stock of the 20 best-seller DSLR in Japanese market for the year of 2008. According to the data, which accounted for 93.3% overall DSLR sale in that region; the “Big Two” held its spots, continue to dominate the cutthroat DSLR market despite threaten by the new Four-Third Standard from Olympus and Panasonic, as well as the increasingly popular Sony Alpha. 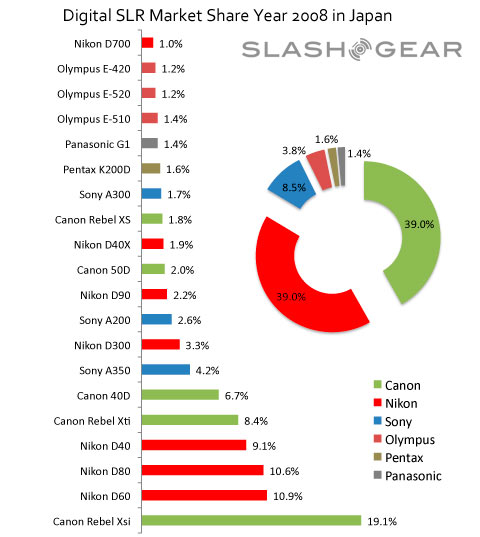 Entering the year of 2008, Nikon upheld the top spot in Japan’s DSLR market with 43.7% in sale, 4% higher than its bigger rivalry Canon. But riding on the success of EOS 450D/XSi/Kiss x2, which led the domestic market with 19.1% share; Canon has rebounded and is now toe to toe with Nikon, each held an equal 39% share accounted for the market.

If you’re noticing, there are zero pro body makes it to the chart. If any, Nikon D700 is probably the best semi-pro on the list. The battle for third spot got interesting with Sony in the mix, but the late comer in DSLR field has knocked the 2007 third-ranked Pentax off its share, closing out the year of 2008 with 8.5% market share. (Based of available data). Pentax ranked third with 5.8% sale last year.