Peek and Twitter are no strangers – the company announced a tweet aggregator system for the email-centric device back on its one-year anniversary – but it’s looking like they have a more dedicated option in the offing.  Amazon are listing the TwitterPeek, a dedicated “Mobile Tweeting Device” which promises unlimited tweeting in the US and, included in its $199.95 price, lifetime service.

It looks as though Peek have used the same Peek Pronto hardware as for their email model, but deleted the email and SMS support in favor of an instant-delivery Twitter client.  Peter Ha has apparently had a one-on-one session with the TwitterPeek’s packaging (no word on whether there was a functioning device in there or not), which lends even more authenticity to the story.

So far Peek themselves have remained quiet on the issue, and Amazon’s pre-order page has no suggestion of a release date.  Has Twitter really reached such a saturation point that a dedicated device – without a camera, mind – makes sense? 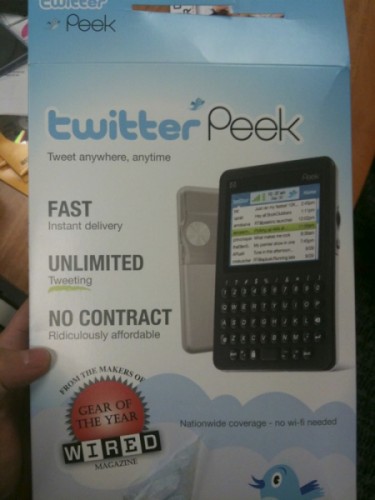