Twitter has been working on several projects lately, all of which tangentially tie-in to one another. Their latest, Offers, might tie some of their more recent service together nicely. The aim of Offers is to let you grab a coupon right from Twitter, done via Promoted Tweets. All you have to do is click a button, and the coupon is yours. If you also have a credit card stored with Twitter (for their ‘Buy’ button), the coupon is then associated with that card.

The downside is that coupons aren’t immediate. The discount is applied to your card statement days after purchase. If you aren’t one to revisit your statements weekly, that could lead to revelations weeks or months later that the big discount you thought you were getting doesn’t apply. It might also lead to issues in-store, where customers are expecting purchases to reflect discounts immediately. 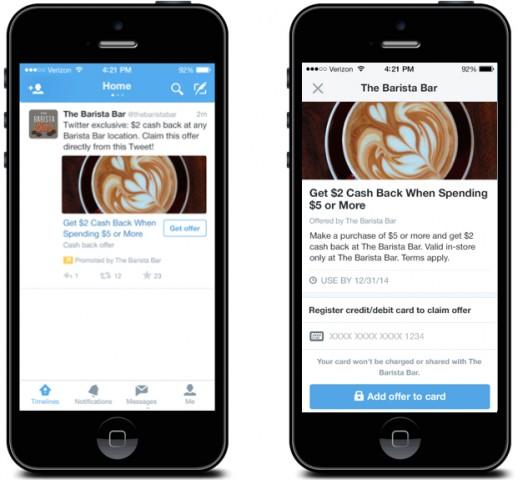 Still, it brings Twitter’s services together nicely. Having a card on file is the most streamlined way to retrieve deals, and Promoted Tweets along with this coupon scheme are both money-makers for Twitter. In many instances (purchases online), it also makes Twitter the payment processor.

All the data is tracked, too, meaning Twitter is leveraging the success of Offers against future ad sales. If the return on investment is positive for companies who are participating in Offers, Twitter might be onto something big.

According to Twitter, a handful of brands will be helping them test this out during the holidays in the US.