Today the micro-blogging website known as Twitter experienced a bit of a catastrophic breakdown which resulted in a bit over an hour of downtime. Engineers worked on the problem for what at first appeared to be a brief interlude between Twitter’s seemingly impervious to traffic up-times, but the problem persisted after 30 minutes time, at which point official word was that the issue was “on-going” and that “engineers are working to resolve it.”

UPDATE: The issue has since been resolved, and with the return of Twitter comes the massive amounts of Tweets that speak about only one thing: the downtime. The issues Twitter faces today are likely connected to problems Twitter’s email servers had on the 19th of this month, with the last errors in Twitter’s mainframe being with their content management system – specifically with photo uploads – on the first of this month. 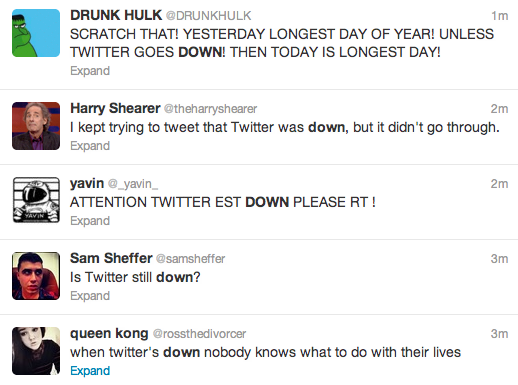 The dominant comment of the day appears to be that users are surprised at how much they rely on Twitter to get them through the day. How about you?

Let us know how frazzled (or completely unaffected) you were at finding Twitter to be down for this brief time here at the start of Summer! Also have a peek at the timeline below to get up to date on all things relating to your favorite social network: