Today Twitter begins its journey into the public realm with their Initial Public Offering, seeing a relatively quick rise in price of each share in early hours of trading. The Twitter IPO began with the company offering up 70 million shares with stock priced at a cool $26 USD per share. Soon after the initial offering, the first trade was made at $45.10 a share, making an impressive 73% jump right off the bat.

As this article is being published, the price of Twitter’s stock – named TWTR for short – is holding in at around 45.50 per share. That’s plus over 19 points for the day and an increase of 75% from the start of the day. Current volume for the stock in the market today is at 75,717,647 at the time of this article’s posting. 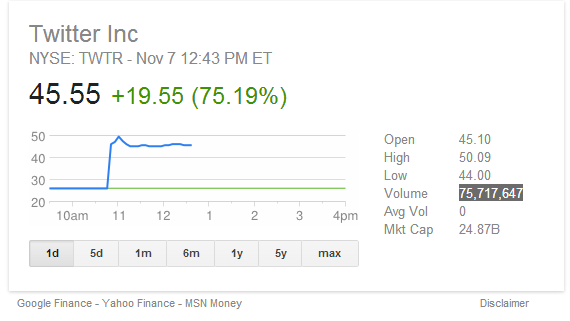 According to Google Finance, Twitter is doing significantly better in today’s trades than many other big name technology brands on the market. You’ll find every company from LinkedIn to Google to AOL and back finding minor downturns in trading today. 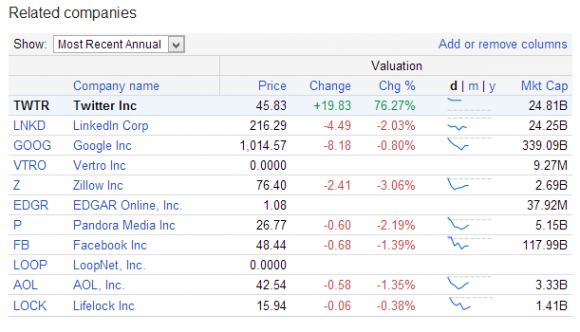 The company we’ll expect to be comparing Twitter to on the market the most, Facebook, currently sits at 48.44 a share with a change of negative 0.68 for the day so far. Market cap for Twitter is currently extremely similar to that of LinkedIn, with Twitter’s cap at 24.81B and LinkedIn at 24.25B.

The image you’re seeing above is a photograph of the New York Stock Exchange taken by Zach Seward posted on – appropriately – Twitter. The massive blue banner with Twitter bird logo will likely remain on the front of the building for the remainder of the day while the stock is the biggest news of the exchange until the trading day closes. Have a peek at the timeline below for additional bits and pieces of Twitter’s IPO and stay tuned!