Cryptocurrency enjoys massive popularity at the moment, and with that popularity comes many, many scammers. Facebook has already taken the drastic step of banning all crypto-related advertisements to tackle the issue, and now Twitter is cracking down on its own scammer problem. The company has said that it is actively putting measures in place to take care of the problem, but will it be enough?

Any active Twitter user can see there’s a problem. Head over to a popular Twitter user’s account — Elon Musk, for example — and sort through responses to any given tweet. There’s a good chance you’ll see a flood of scam accounts attempting to get unsuspecting users to send them cryptocurrency. Some of those accounts use the same profile picture and name as the account they’re responding to, making them harder to detect. 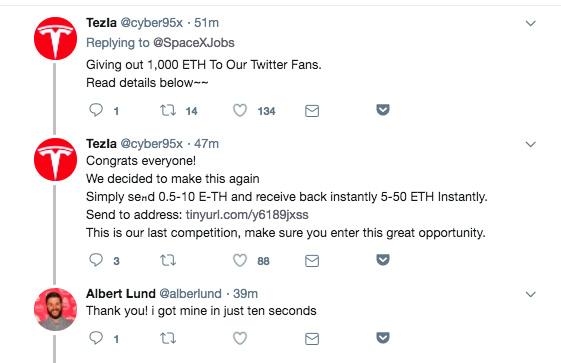 Musk’s recent tweet about Tesla Semi truck deliveries, for example, was initially filled with crypto-scam accounts offering to send Ethereum to users who first send a little bit of the same to the scammer. Other scam accounts then responded to the initial scammer, proclaiming that the arrangement had worked and that they’d received their digital money.

It’s all fake, of course, but sometimes the fakers are hard to spot. Someone using a legit person’s profile image and name will, at first glance, appear to be that user. Someone who understands how Twitter works will notice the lack of a verified checkmark and altered @accountname as the signs of a fraud, but many people, being unaware of how to evaluate an account’s authenticity, fall victim.

In a statement to The Verge, Twitter has stated that it is aware of the problem and is “proactively implementing a number of signals to prevent these types of accounts” from continuing their scams. In the meantime, users are advised to avoid sending bitcoin and other digital money to unknown individuals online and to flag scam accounts they come across.