Twitter has prompted user confusion by implementing a new copyright policy that censors contentious tweets rather than deleting them altogether, a shift that the microblogging service argues is more transparent. According to Twitter’s legal policy chief, Jeremy Kessel, the change offers “more transparency by processing copyright reports by withholding Tweets, not removing,” though some users have still criticized the approach for  potentially censoring first and investigating second.

According to Twitter’s official DMCA policy, the company reserves the right to restrict access to a contentious tweet before a final decision on whether copyright infringement has actually taken place:

“Twitter’s response to notices of alleged copyright infringement may include the removal or restriction of access to allegedly infringing material. If we remove or restrict access to user content in response to a notice of alleged infringement, Twitter will make a good faith effort to contact the affected account holder with information concerning the removal or restriction of access, including a copy of the takedown notice, along with instructions for filing a counter-notification” Twitter

While in the past, however, such tweets were deleted, they now read “This Twitter from @Username has been withheld in response to a report from the copyright holder,” together with a link to the appropriate policy. A similar message can be shown for media subject to a copyright take-down report. 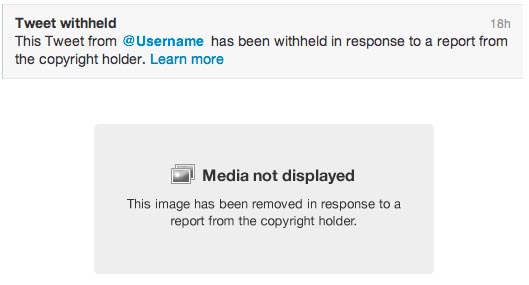 A Twitter spokesperson claims that the blocking system is preferable to the old approach, which saw the company manually recreating tweets that had been deleted but then deemed not to infringe:

“[W]hen we get a valid DMCA request, we withhold the tweet until such time as we get (if we ever do) a valid counter-response from the user. In this case, if someone with the permalink tries to navigate to the tweet, they’ll see that it is being withheld for copyright reasons. We also send the requests to Chilling Effects for publication. Our prior policy was to delete the Tweet without any language explaining the takedown, then manually repost the Tweet if/when we got a valid counter response” Twitter spokesperson

The increased transparency of the process is being welcomed by many, but the extra visibility of how Twitter reacts to copyright claims is also prompting some confusion from users.