Twitter CEO Jack Dorsey has resigned, with the co-founder handing over the reins at the social network to Parag Agrawal. The decision – sees Dorsey buck the trend of “founder-led” companies – will also include him leaving the Twitter board, at a time when the role of social media in politics and more broadly across daily life is under the microscope.

Dorsey co-founded Twitter almost 16 years ago, and has over that period been Chair, Executive Chair, and CEO at various stages. As of today, Parag Agrawal – until now Chief Technology Officer (CTO) of the company – will be assuming the Chief Executive role.

“There’s a lot of talk about the importance of a company being “founder-led,” Dorsey wrote in an email to his team, and also published on his own Twitter account. “Ultimately I believe that’s severely limiting and a single point of failure. I’ve worked hard to ensure this company can break away from its founding and founders.” 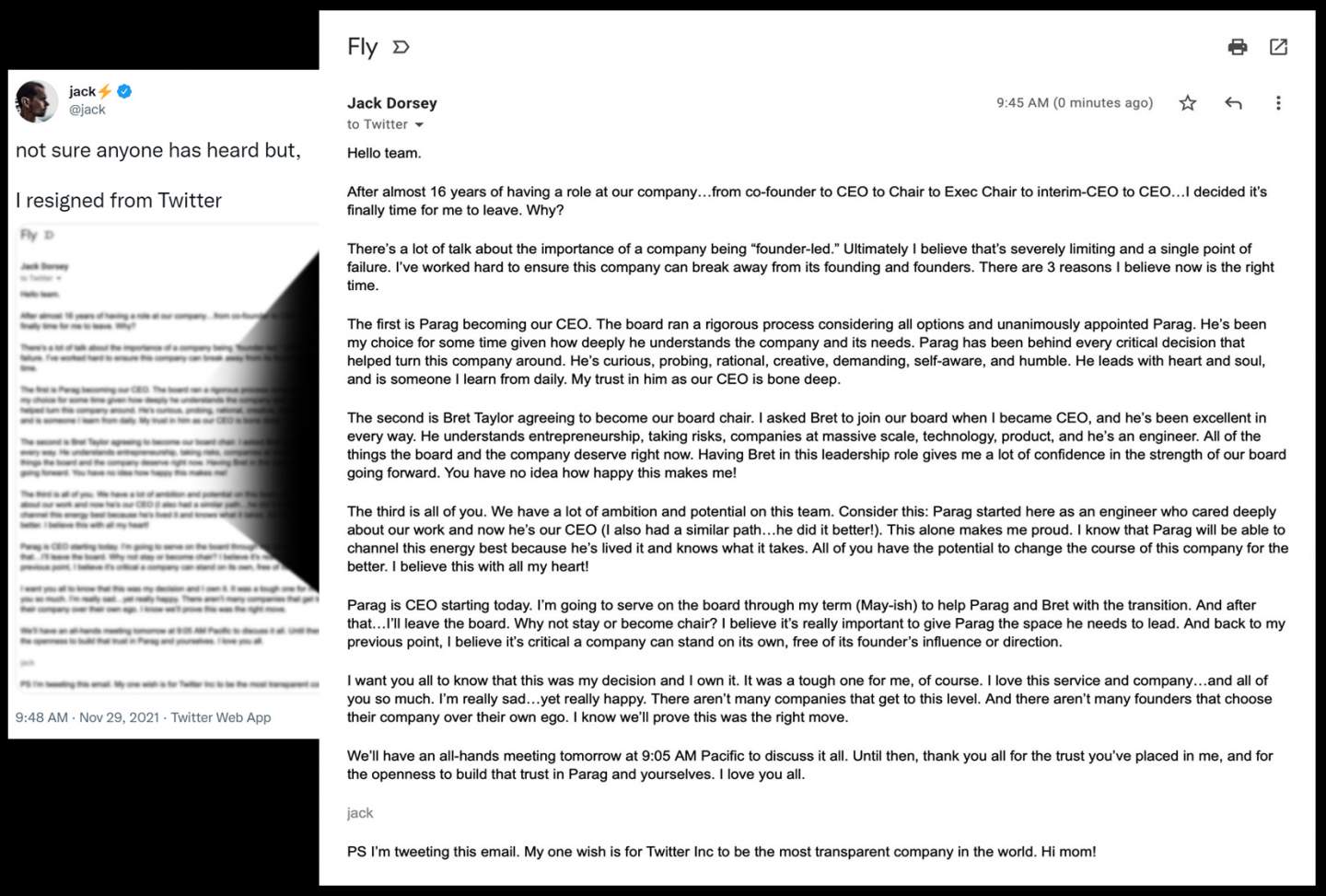 Agrawal has been “my choice for some time” for the new CEO, Dorsey wrote. Existing Twitter board member Bret Taylor, meanwhile, will now take over as board chair. Dorsey will continue to serve out his term on the board through to May 2022, assisting with the transition, and then leave that too.

“I believe it’s really important to give Parag the space he needs to lead,” Dorsey explains. “And back to my previous point, I believe it’s critical a company can stand on its own, free of its founders influence or direction.”

As for Agrawal, he similarly tweeted out his email to the Twitter team (including, either inadvertently or intentionally, his email address at the company) acknowledging the new role. Employed at Twitter for 10 years, initially as an engineer, he touches on the challenges that the company faces right now.

“The world is watching us right now, even more than they have before,” the new Twitter CEO explains. “Lots of people are going to have lots of different views and opinions about today’s news. It is because they care about Twitter and our future, and it’s a signal that the work we do here matters.” 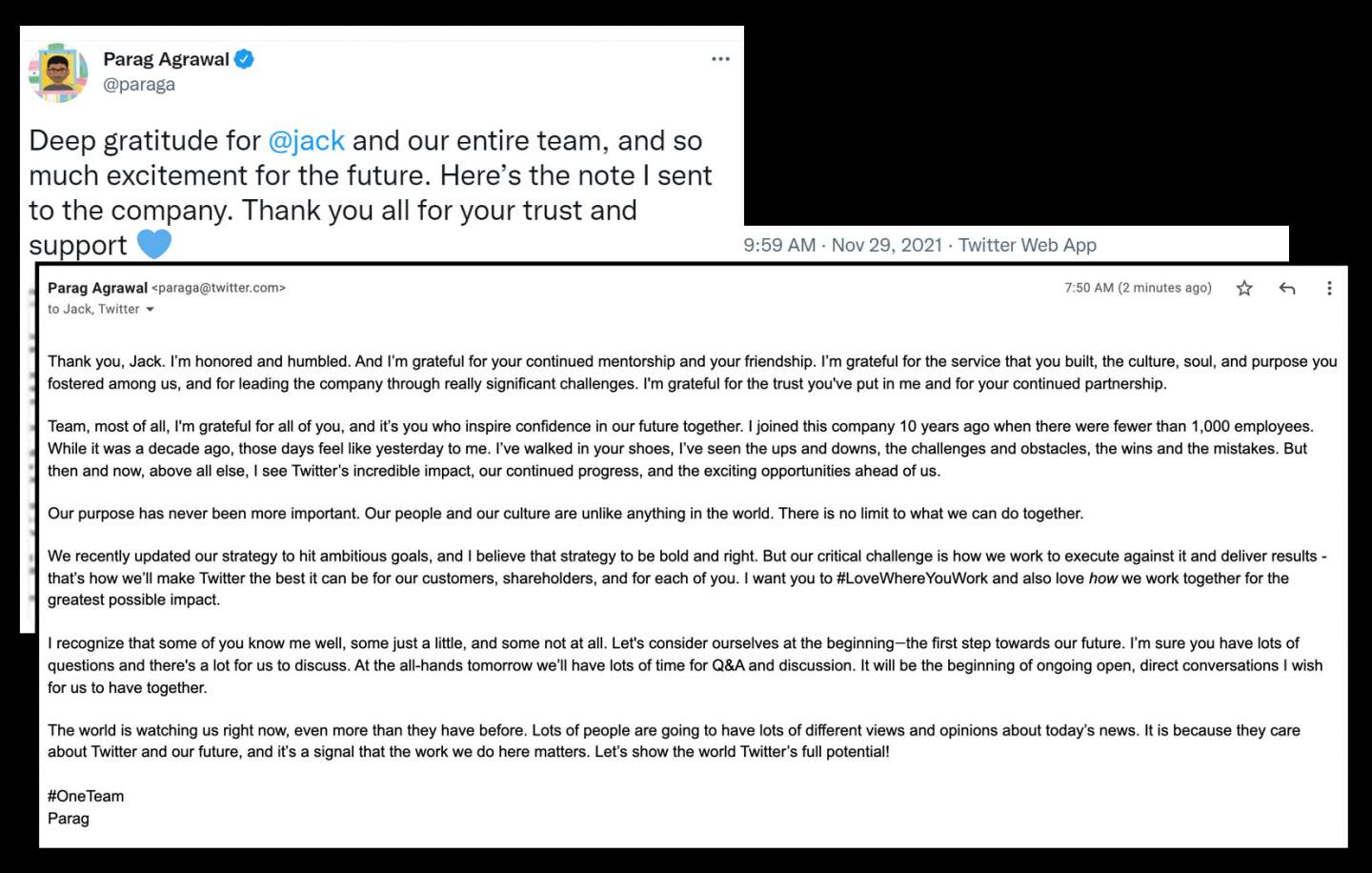 Twitter’s role – like Facebook’s – in the current political and social climate has proved to be a controversial one. The outbreak of “fake news” during elections in the US and internationally over the past years have been punctuated with Twitter being variously used as a mouthpiece, an amplifier, and a source of misdirection. Fake accounts, bots, and foreign manipulation have also been commonplace, in many cases seeking to further the division between political groups.

At the same time, Twitter’s responsibilities toward its users have also proved divisive. The social network’s decisions to block – temporarily or permanently – high-profile people, including former US President Donald Trump, met with outcry from both sides of the political aisle. Calls, in many cases from those with more volume than technological savvy, for regulation of services like Twitter have also gained some traction.

It’s a challenge that Agrawal will face on day one of his new role, along with struggling to carve out financial stability and service growth for Twitter in the longer term.